why are these people even allowed to set foot onboard a boat let alone go out past the sight of land on one? SHEESH! 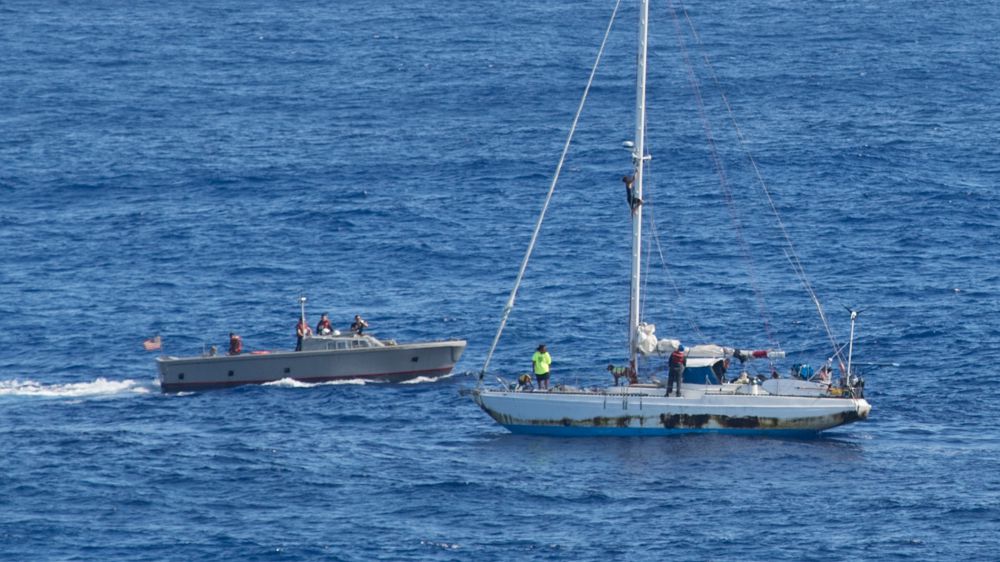 On Wednesday, the Navy sailors of the dock landing ship USS Ashland came to the assistance of two yacht sailors who had been adrift for months in the

this story is too PATHETIC and RIDICULOUS to even contemplate!

Consensus on Sailing Anarchy is that it is a publicity stunt/scam.

They weren’t on that boat for 5 weeks, let alone 5 months.

That blonde dude looks pretty ripped for being stranded at sea and the dog didn’t miss any meals either.

So set off on a sail boat and know absolute nothing about sails or sailing.
Engine dies… scratch head alot…

No navigation skills, no charts most likely or charts used a decor in galley area.

Show up on Oprah or Ellen next week as both hero’s and victims… SHEEESH is right.
Glad no one got hurt in the rescue of these two clowns.

This is fishier than a week old tuna sandwich.

Poor darlings. How were they supposed to know a “force 11 storm with 37-52 foot waves” would pounce on them right after they left the marina.
Too bad the thought of using the sails never occurred to them as they drifted for 5 months. Riiight…
It’s a half ass farce they concocted to get on You Tube and I suspect really good quality hallucinogenic drugs were a factor.
Whatever money they make from that stunt should be reimbursed to the taxpayers for their “rescue”.

Appel and Fuiava, both from Honolulu, had set sail for the Polynesian island of Tahiti at the beginning of May. The boat’s engine died at the end of the month, and the two had been lost at sea for the majority of the time since. In a lengthy interview aboard the Ashland, they appeared to be in good spirits as they recounted their perilous journey.
The two had set off on May 3, expecting an 18-day trip to French Polynesia, where they would spend the next six months traveling around thousands of small islands in the South Pacific. They planned to head back to Hawaii by October to avoid the hurricanes that would come in November.
The voyage went south quickly. They encountered what they said was a Force 11 storm — a classification for a violent storm with 37-52 foot waves — on their first night, which lasted for three days. They decided against returning to Hawaii.
“When we were through with that we were empowered to know we could withstand the forces of nature, the boat could withstand the forces of nature,” Appel said. “We decided not to return to Hawaii but to continue on in our journey because we believed that everything ‘shook out’ and we’d be all right.”
Next came problems with the boat. The bolt holding the spreader to the mast was bent, Appel said. The two decided to push on, to the island of Kiribati, a small island more than 1,000 miles south of Hawaii, to fix the issue, only to find the boat was too big to fit in its lagoon. So they continued south, now hundreds of miles off their planned course.
Eventually they found themselves in what Appel said was a “white squall,” a particularly violent and sudden storm, which flooded the boat’s cockpit and ignition. They were less than a month into their journey, and they no longer had the ability to use the boat’s motor.
Then came the packs of tiger sharks, ramming into the side of their boat.
“They decided to use our vessel to teach their young how to hunt,” Appel said on a call with reporters. “It was lucky our hull was strong enough to withstand the onslaught.”
Appel told NBC’s “Today” show she took the dogs downstairs, and “we basically laid huddled on the floor, and I told them not to bark because the sharks could hear us breathing. They could smell us.”
Fuiava told “Today” she kept watch at night, sending distress calls and flares when other vessels were within sight. “And when they would turn or keep going,” she said. “Yeah, it was kind of sad.”
Their distress signals went unanswered for months. The Navy said “they were not close enough to other vessels or shore stations to receive them.”
Luckily the pair had prepared for a long trip; they had water purifiers and what they hoped would be a year’s worth of food on board, mostly dry goods including oatmeal, pasta, nuts, dried fruit and rice. By the time they were rescued they had eaten about 90 percent of their food, Appel said. The food for their dogs, Zeus and Valentine, had been completely consumed.
In the conference call with reporters from the Ashland, Appel said the pair sent a distress signal for 98 days.
“It was very depressing and very hopeless, but it’s the only thing you can do, so you do what you can do,” she told reporters, according to the Associated Press.
When asked whether she thought they might die, Appel responded it was only human to believe that.
“There is a true humility to wondering if today is your last day, if tonight is your last night,” she told reporters.
On Tuesday, a Taiwanese fishing vessel came across their sailboat, “well off its original course.”
The fishermen had difficulty trying to tow the pair and alerted the U.S. Coast Guard. On Wednesday, the USS Ashland, a warship operating out of Sasebo, Japan, tracked them down and dispatched the rescue boat.
© U.S. Navy photo by Mass Communication Specialist 3rd Class Jonathan Clay/Released Navy sailors (left) rescued two American mariners who had been in distress for several months after their sailboat’s engine died.
The two sailors and their two dogs were brought safely aboard after the Navy determined their boat was no longer seaworthy.
The two said they were overjoyed to be rescued but a little sad to leave the sailboat, the Sea Nymph.
“Utter sadness cause that was our life for the last two and a half years,” Fuiava said. Appel, the president of a company that builds green roofs, according to the Honolulu Star-Advertiser, had spent two and a half years working on the boat to ready it for the journey, Fuiava said.
Once aboard the Ashland, they were assessed by medical staff and given food and lodging arrangements. The Navy said they will remain on the ship until its next port of call.
Photos distributed by the Navy show the women smiling aboard the warship. Zeus the dog appears in good spirits, if a bit skinny.
Appel said she was reminded of a conversation about sailing she had with an acquaintance some 10 years ago.
“I was joking with someone,” she said. “And they said what happens when you go out to sea and you get broken? I said, ‘Oh, the Navy will come save me.’”
© U.S. Navy photo by Mass Communication Specialist 3rd Class Jonathan Clay/Released Tasha Fuiaba climbs board the USS Ashland after being rescued.
Is that one of the dogs climbing the mast?!?

This entire story is so full of weird.

Simple answer to why.

Two bored women are looking for an adventure to write about and possibly sell movie rights.

Is that one of the dogs climbing the mast?!?

…may be a Navy seaman?

Interesting: The fouling pattern on the hull over the whole length of the boat.
I would say the boat was at anchor for a long time, in protected waters, with water inside and heeling.
An insurance scam?

I’ll bet they made some good videos with the dogs, not that there’s anything wrong with that…

This entire story is so full of weird.

it is also filled with complete and utter BULLSHIT!

Interesting observation on the bottom fouling on the hull. I agree, it looks like the boat spent a lot of time heeled over. Not necessarily from flooding but more likely from bringing the vessel into a shallow cove or lagoon until the keel touched bottom. Our intrepid castaways and the dog waded ashore, tied the boat up good and camped ashore for a few months.

They then got bored, waited for a king tide to free the boat, then set sail looking for a rescue.

Now phase 2 comes into play when they appear on the talk show circuit, write a book and sell movie rights.

Yeah - sure beats working for a living.

I didn’t catch their names in the article but Ginger and Maryann would be fitting.
Personnally, I’ve always favored Maryann.

Not necessarily from flooding but more likely from bringing the vessel into a shallow cove or lagoon until the keel touched bottom.

The two decided to push on, to the island of Kiribati, a small island more than 1,000 miles south of Hawaii, to fix the issue, only to find the boat was too big to fit in its lagoon.

Seems to make sense to me. If the book reads like the whole blurb Lee_Shore posted, it could be pretty good. A true sailors yarn… Ha

Seems to make sense to me. If the book reads like the whole blurb Lee_Shore posted, it could be pretty good. A true sailors yarn… Ha

except there is NO island named Kiribati…Kiribati is a nation of many Pacific Island groups including the GIlberts, Phoenix and Line Islands