In Singapore you usually hear that about sending vessels to work offshore Oz.

Agree with ships sent to work in the Aussie offshore. Had one owner complain about the upper deck maintenance of a small container ship on the transTasman Sea run. We had to explain that most of the time the weather decks were no go areas at sea.
I have also experienced spare parts as being “used but good” and repackaged in their original packaging and non genuine parts (Chinese manufactured in my case) substituted for genuine parts. The cylinder liners were missing a crucial oil way.

Applying several coats of Shellac to the inside of used spare cylinder liners were a “popular” way of making sure caliper measurement was accepted by buyer’s inspectors when selling old ships.

The problem with Offshore vessels on even relative short term charter in Australia was that the Union (MUA) insisted on all crews (incl. Master and Ch.Eng) being Aussies.
This was taken to such extremes that tugs making tows to Oz actually handed over tow in international waters to avoid calling at any ports there.

It was a well known fact that when such boats returned to Singapore after 3+ Mths. they were in bad condition and in need of major repair and overhaul. (Not to mention removing all the “MUA, Here to Stay”-stickers plastered everywhere)

Not much incentive for the Aussie crews to do much maintenance, when they knew that they would only be on the boat for a few weeks/months.

PS> Some Owners kept their own Master and/or Ch.Eng. on board, even if there were also a MUA Master/Ch.Eng. (Some flag states do not allow foreign Masters)
How that would pan out in Court in case of an accident is not know. (I think??)

A few years ago I had the opportunity to dig deeply into the conversion project of a 64m fisheries patrol vessel into a large yacht. The boat had spent the previous few years undergoing “conversion” at a Brazilian shipyard.

Rather than write a book, which is what it would take to describe all of the disasters discovered, the fact that critical piping systems had valves buried beneath other piping runs that made it impossible to access the actuators much less pack or remove the valves for maintenance, hull fairing up to a foot thick in places, hull fairing filling holes in the hull skin (yes, a plastic patch) and weather bulkheads (yes, actual superstructure skins on the weather deck) made of plywood and covered with plastic fairing - Bondo. Absolutely nothing was of a standard that would pass a class survey.

The owner trusted the yard and just wrote large checks until he finally twigged that something was not quite right and he had the project towed to Florida for completion. It didn’t take long before the vessel was towed once more to be scrapped.

The offshore company I worked for got asked to send a couple of clued up punters to look at an AHTS that Fred Olsen bought and was in Brazil to get it operating.
Fred Olsen stitched up massively such that several of the crew on board had already heard about it as it was going on for so long.

The work done on that ex-patrol boat was criminal. All the evidence indicated that not a single person involved had ever seen a class rules document or even set foot on a steel ship.

At the time I was employed in a very responsible position at one of the world leaders in superyacht management and what I saw what was done to that owner pretty much turned me off the industry.

Bad shipyard, but what has that got to do with “(Offshore) vessels working in Brazil”??
I believe there are some US owned vessels working there (don’t know if US-flagged).
Any horror stories about those?

Anecdote:
Back 40 years ago I did several rig moves on an Argentine J/U Rig off Tierra del Fuego. The rig was build at Livingston Shipyard, Beaumont, Tx. in 1980 and classed by ABS.
After a “punch-through” we found a number of cracks in the main beams holding her up when elevated. When coughing out the cracks to repair it was found that welding rods had been used to “fill the welds”. (Nothing shown in X-ray records from the yard, or ABS reports)

BP built a tanker in Batam a few years ago, one expat in the yard telling them, guys when they xray the welds you will be grounding them all out, they looked at him like he was joking.
Sure enough BP sent a crew down who xrayed it and then the yard spent the next 18 month grinding and welding, again.
Its all about suckers that go to cheap yards.
PS that was the yard at that time that had the huge riot

only a fool would take anything to Brazil for yard work.

The owner was a rich Brazilian.

Years ago I went with a buddy who was doing some acceptance trial testing on a RORO for oz.
Built in Singapore yard, Captain and CH Eng on board, 18 month project, 18 months overdue, the penalty was kicking in such that it was almost free.
DNV crooks (edit)approved the design, they made a school boy error in the engine control room and had the structure welded to the main beams that the engines were sitting on as well.
Hence you couldnt keep it quiet, didnt meet ozzie regulations ( or anybodies)

The paint spec was smooth finish but the yard kept using those small electric piston pump guns that leave a stipple finish. Apparently they had already sanded it and had redone it again but with the same technique. DOH

Singapore yard cockups, I could fill a whole thread. They certainly gave my buddy a whole career engineering the same fixes for the same cockups over and over again. He said it was a gift from god.

You mean this one?: 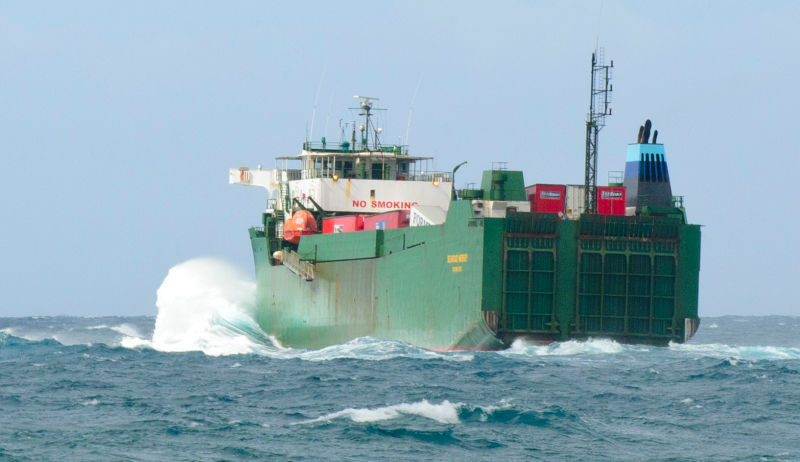 RoRo vessel for sale in Australia

DNV crooks did the class design

Class don’t do designs, they approve them.

Singapore (yard) cockups, I could fill a whole thread.

You already have filled several threads with negative posts about everything, Singapore especially.

yep thats it.
yep they approved a faulty design
yep know Singapore is the place to post about Singapore
yep dodgy ships in yards thread needs to include Singapore
You worked in shipping and offshore, one of the most corrupt industries on the planet and in Asia to boot.
Did you not notice?
Did you live in dreamland or reality?

I believe there are some US owned vessels working there (don’t know if US-flagged).
Any horror stories about those?

Yes, there are and yes, since are US flag.

Yes, plenty. Why would the nationality of the owner of the vessel matter?

The robber baron’s don’t care about nationality apart from the fact are there financial dealings suitability secret.

For there substitute their before the grammar police hang me