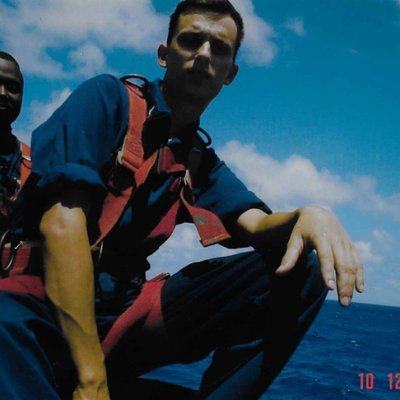 Screen shot of the bollard flying - it’s in line with the tug. 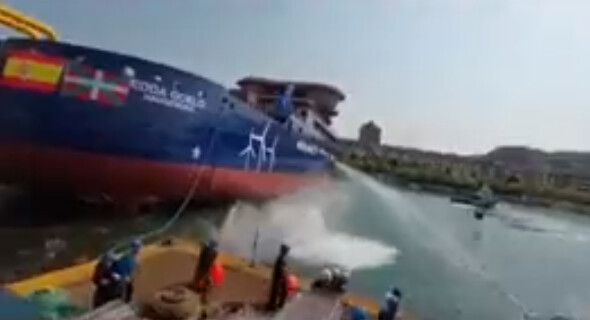 Person shooting that video was bold…

I only ever saw the bitts get ripped out of a ship’s deck and flung like that. We were bunkering in heavy chop off Sri Lanka — I was at the ledge near the bridge windows writing in a notebook and heard a bang and saw an object shoot by me outside. Thought it was a bird at the anchorage, it was the bunker vessel’s deck bitts.

Did a survey where a centreline aft bollard had been ripped off the deck of a 3500 TEU container ship on her maiden voyage by a tug. Given the bollard pull of the tug further investigation revealed the Chinese yard had failed to build the foundations to plan.
In another case the almost vertical strain exerted by a car carrier on a bollard on an older wharf caused the bollard to be pulled from the wharf like an old tooth. The bollard weighing something like 350Kg was flung over the ship and landed in the water some 100 metres the other side in waters frequently used by ferries.There were a number of lines on the same bollard.

Person shooting that video was bold…

I would venture to say he probably didn’t have a clue what was about to happen.

Just the way they’re standing in line with them says they have no idea.

It looks like they might have intended to have that line flipped over to the other side of the bollard, same as the other two.

Is that part of another parted line hanging down from the chock further aft?

I would venture to say he probably didn’t have a clue what was about to happen.

I wrote that tongue in cheek.

These videos vividly illustrate the fact that some of the persons on the pier during that mooring evolution had no concept of what could possibly go wrong. It was lucky the bollard, when its attachment to the pier failed, moved away from the pier with its mooring rope intact. Consider the consequences instead had the mooring rope parted and whiplashed backwards, striking any of the persons on the pier. Enough stored energy in the rope could have caused devastating injury or death to someone. Was any risk assessment done prior to the approach of the vessel? What sort of risk assessment would have allowed for that many persons on such a small pier during a mooring evolution, and would a proper risk assessment allowed for some of those persons to have have been capturing videos? Just saying?

It looks like they might have intended to have that line flipped over to the other side of the bollard, same as the other two.

I was thinking the same thing. This looks like it was a dead ship shift and they were reliant on the mooring lines (and out of view tugs) to control the motion. That being said, this looks like it was all happening WAYYYY too fast. As soon as that line got hung up, it was time for everyone in that area to GTFO. Those sparkly new mooring lines could just have easily parted and cut everyone on that deck in half.

Coming in way too hot for sure. Might of been a mechanical, don’t see a tug aft.

It’s the Edda Goelo, just launched a few days ago. That would explain what all those people were doing on the pier.

This happened during the launching:

It was first posted in the Wind Farm Vessels thread:

She got some bollard pull!

That explains how the line-handlers were able to get three heavy lines on that bollard. Be a trick to get all three with the ship moving that fast.