When Greenland were actually Green

Once upon a time even the NE coast of Greenland was fertile and teeming with life: 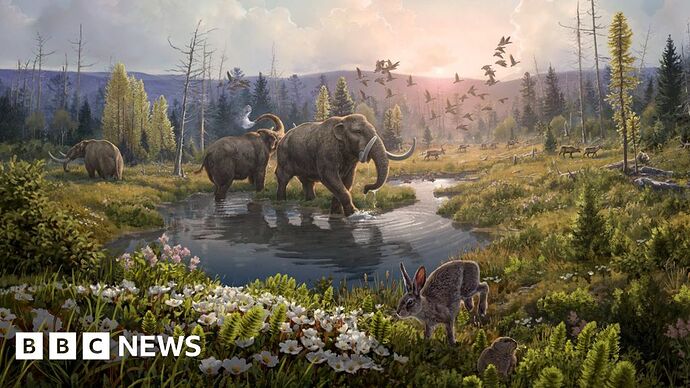 Genetic material extracted from soil has revealed the ancient plants and animals of North Greenland.

But what caused this warm climate? Was it because of more CO2 in the atmosphere at that time, or because the Geographic North Pole has shifted since then?

Or maybe because of continental drift? IOW; Greenland was much further away from the North Pole at the time?

I did a fair bit of work on Palaeoecology and Palaeobiogeography with an Australian university, climate change, including faily dramatic change is normal, a static climate for any geologically significant period of time is rare depending on the degree of change considered.
Reasons vary including vulcanism, solar activity, atmospheric gas and variations, bolide impacts, albedo changes, and many other factors.
Magnetic poles move creating magnetic polar wander curves and can change the shape of the Van Allen Belt but geographical pole variation is so very rare.
Plate drift rates vary but two million years is not much in geological time.
Northern Hemisphere climatic variation is higher than the Southern Hemispre due to the proportion of continental surface to ocean.
There are many papers on the Greenland topic you can choose your poison with those.

I will NOT be drawn to comment on anthropogenic climate change models.

In the cultural layers of medieval Gdańsk a signifcant
number of remains of fruits and nuts have been preserved.
Some of the fruit trees could have been cultivated in local
gardens and orchards. Numerous Prunus fruitstones, including P. domestica and P. domestica ssp. insititia, were found
in the 11th and 12th century samples from site 2, while other
sites showed the presence of Malus sp., Pyrus sp., Cerasus
vulgaris and C. avium. Ribes rubrum appeared in the 14th
century. Remains of Vitis vinifera and Ficus carica have
been found in the features dated to the 12th century and
Persica vulgaris to the 12th/13th century transition. It is
difcult to decide whether the grape pips are the remains of
imported raisins (Gade 2018) ***or perhaps of locally grown ***
***grapes used to make the wine needed by the church. The ***
***historical sources tell us that the Cistercians, who settled in ***
Oliwa (now part of Gdańsk) in ad 1178 were obliged to grow vines (Badowicz 2017) and then in the 13th and 14th centuries several vineyards **were established in the region, mainly **
**due to the activity of the Teutonic Order (Tandecki 1997). **
**The relatively warm climate in the Baltic region in that **
period made viticulture possible

above i think is self-explanatory .
Cheers

Check out the Dalton Mininum 1790-1830 for an even more recent variation
Very short event though, geologically speaking, 40 years.

I must say honestly my jaw dropped here causing local earthquake . I am truly impressed.

I thought the very name Greenland was a real estate scam to make it easier to get people from Iceland to go there and it was not actually green at the time.

I remember talking with an agronomist when I was in the UK in the late 90’s and he spoke at length about the shorter and cooler growing season the UK has had since the 15th century and how yield per unit area in some of the same farms used today decreased as a result up until modern practices intervened.

It WAS a real estate scem, but Greenland was also greener at the time Erik the Red recruited settlers for his newly established colony: 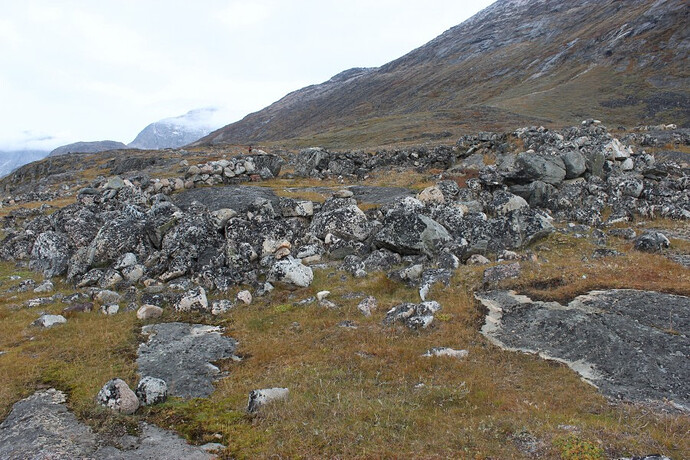 The Norse Settlement of Greenland

Erik the red is a very colourful and important figure in the history of the Norse Vikings. The source for his story is found in the Icelandic Sagas Huaksbók (14th Century) and Skalhóltsbók (15th Century). Also Flateyjarbók (13th Century), which...

PS> The climate was warmer at the time (987 AD) and they did grow grain in Greenland.

Imagine the effect on European agriculture today, of a 40 year long cooling event. Not to mention energy demand, navigation, and public health.

Looks like we should worry more about a warming event that is already in progress: 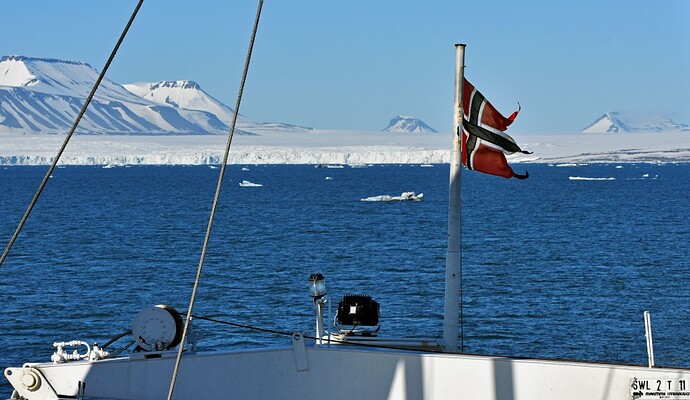 Higher air temperatures and lower sea ice cover continue to transform the Arctic, says the Arctic Report Card 2022 released on Tuesday by the National Oceanic and Atmospheric Administration (NOAA) in the United States.

I wonder if Greenland will be green again ?

Maybe it will as the permafrost melts and the growing season gets longer every year, especially in the area where the Norse settlements once thrived: 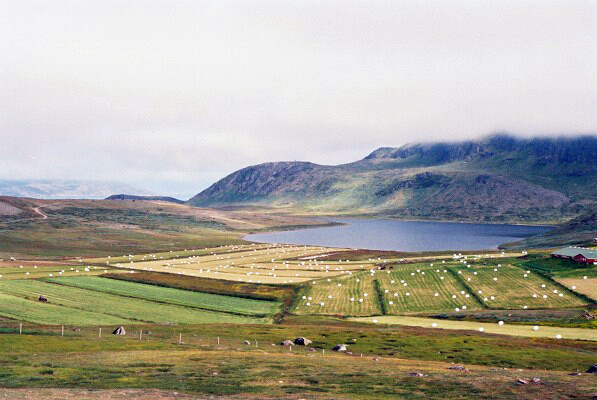 Harvesting hay in the area where Eastern Settlement once was.
PS> This is about on the same Lat. as Bergen.Norway 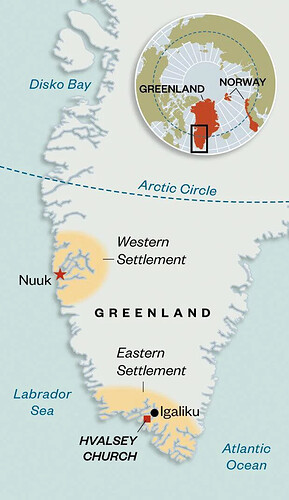 Maybe there are something else to worry about than rising sea levels in the next hundred years: 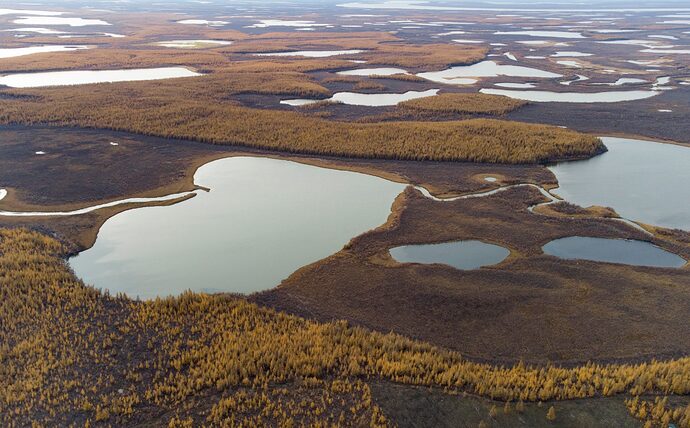 Pandoravirus: The melting Arctic is releasing ancient germs – how worried...

Scientists have recently revived several large viruses that had been buried in the frozen Siberian ground (permafrost) for tens of thousands of years. The youngest virus to be revived was a sprightly 27,000 years old. And the oldest — a Pandoravirus...

I know this is old news; it is getting downright “balmy” in Greenland:

The summer of 2012 brought Greenland far more extensive melt than anything observed in the satellite record: in July 2012, surface melt extended over nearly the entire ice sheet. The standardized melt index was nearly double the previous record. 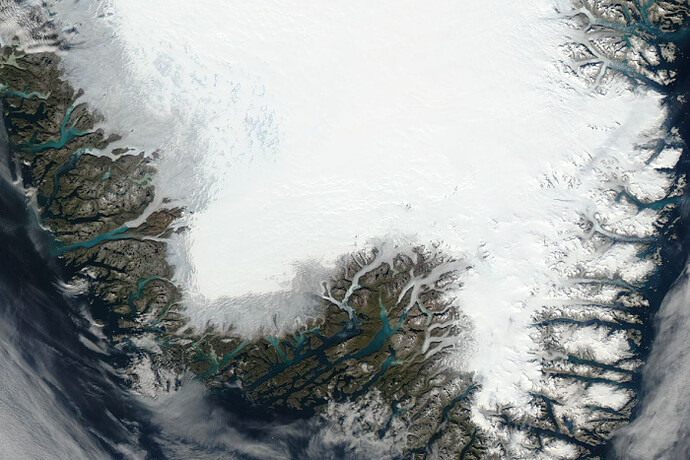