Never had any problem with surge gear with a dutch bar, east or west coast. We used a pelican hook after shortening up. Surge gear can be a widow-maker pins or bar.

I’ve had to handle chain surge gear with a Texas Bar (Dutch Tow Span). It’s a bitch and much more time consuming and dangerous. Towing up short the chain surge gear or wire pennant flops off one side of the bar or the other and then hangs up there on the quarter. If it does come free in a turn and flops over to the other side, it does it with a lot of gusto.

The chain must be pulled up forward of the Texas Bar and aft of the quarter bitts. There will be no pad eyes in the right places to mount the stopper wire and pelican hooks. When you add or take off an extra shot of surge gear it has to be done in a small area forward of the Texas Bar. The winch head may not have power enough to haul chain over the side. Texas Bar boats are simply not set up to handle chain gear.

Try pulling up chain bridles and a shot and half of 2-1/2” chain in 200 feet deep water, such as Elliot Bay (Seattle Harbor) over the quarter forward of the Texas Bar. You’ll never want to see a Texas Bar again.

The best way to get by with a Texas Bar until you can cut the damn thing off and install tow pins is to add a wire pennant and then 5 links of chain on the tow wire end, so that you have a place to attach the stopper, Swede Wire, and safety line, and so you don’t have to try to drag so much chain up over the quarter in many little short bights.

Barges can be towed in Puget Sound, Inside Passage, and SF Bay on wire bridles, but not down the Coast. No one tows off the West Coast without chain bridles and surge gear.

There is a good reason why all the West Coast boats of any size have hydraulic tow pins, a stern roller, and a hydraulic hold down hook. I’ve never seen Texas Bars in routine use on the West Coast.

Harley lost three regular runs. Vane picked those runs up. The first Vane tug showed up a week or so ago, and will start work by the end of the month. 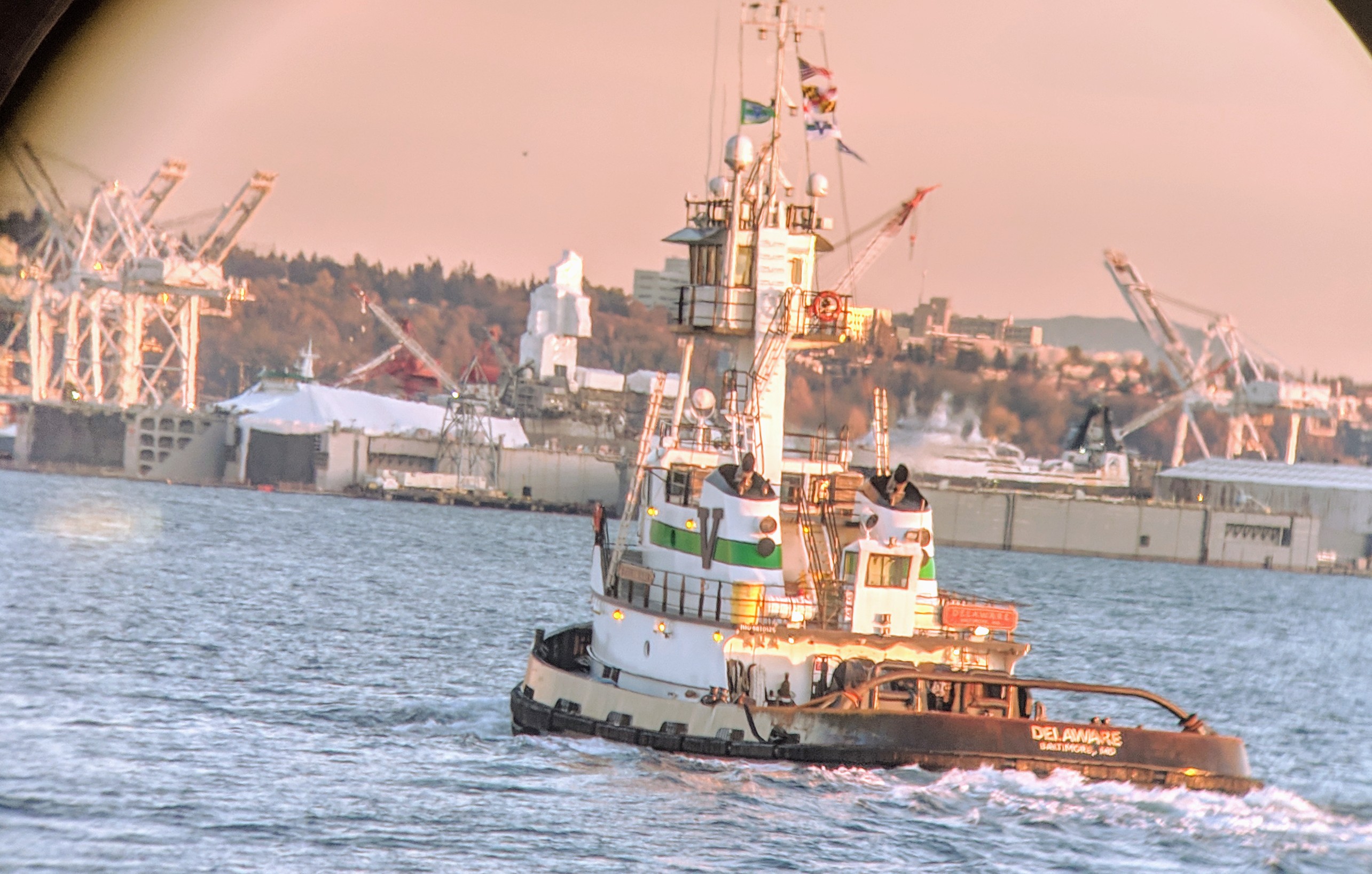 So I want to know how an east coast company without west coast towing experience can just waltz into these contracts? where are the longtime west coast operators in this or are they now far too expensive to talk to?

I believe it is called offering to do the work for less. Maybe the locals got complacent thinking no one else can do the work.

What about Foss as a player. Foss made an appearance in the NE a couple of years ago. I’ve heard of a change up in their hierarchy.

See the post above yours. I imagine the “change up in hierarchy” would lower overhead to some degree, but have you seen them get any recent work for their boats?

It seems likely that cost and complacency are major factors when companies like Foss or Crowley lose out on contracts in their own backyard.

What about Foss as a player

Foss has virtually no coastal towing in the lower 48 and their bunkering is primarily in sf and la/lb.

Harley went to the East Coast and started running money losing operations in the Gulf and in NY (Vane’s backyard). No doubt cutting prices, and taking business from Vane , to get its foot in the East Coast door. Harley’s Gulf and East Coast operations are not well thought of by mariners. And that’s putting it mildly.

For a variety of reasons, East Coast companies in the oil trade have had to tie up boats and lay people off. I heard that Vane laid off 200 a year or so ago. Maybe Philly Shipyard built too many Jones Act tankers, and then the ban on US crude oil exports was lifted.

Kirby, an inland company based in Houston, came to the West Coast in a major way through acquisitions, what 10 years ago? I don’t know what happened to Kirby, possibly the Nathan Stewart incident, but Kirby has shrunk to almost nothing on the West Coast. Harley picked up a lot of former Kirby work and probably had more than they could handle.

Harley fell on some hard times when it’s major investor stopped pumping big money into it and made allegations of fraud. Apparently that scared some customers.

Crowley is in the ATB and tanker business, and ship assist, but they seem to have abandoned towing on the wire.

Sause Bros. Is a very capable west coast tug and barge company, and they are expanding their oil transport business.

I suspect that Vane needs work, and probably figured now was a good time (given Kirby’s and Harley’s troubles) to come to the West Coast and give Harley a taste of its own cutthroat pricing medicine in Harley’s backyard.

If Vane hires some West Coast experience and adopts West Coast methods, they will do fine.

It certainly isn’t rocket science, but there are some significant differences between coasts that require different gear and skills. To be sure, it can be learned.

Long passages down the coast with no safe place to hide from the weather?

Picking up a break away barge in rough weather with an Orville Hook before it goes ashore?

“Same shit, different Coast”, is a really bad attitude. Get over it and start learning the West Coast.

you obviously don’t know your own ass from your elbow!

Everyone should know that Towing on either coast has it’s problems.

Back in the 90’s we were laying in Boston waiting for our Oil Barge to discharge, so I decided to take a walk and find a payphone. As I’m walking up the dock I hear someone call my name. It was a Mate that I had sailed with back in my 333 days. He invited me down to his boat for a cup of coffee. I thought it was strange to see a boat that was homeported in San Francisco in Boston and said so once I got aboard. The Captain was a nice guys and let the Mate give me the nickel tour.

We were all sitting around the galley table B.S.'ing when Charlie (Mate) asked me something strange. He said Chief, what would you think of sailing out of Boston with 10-15 foot seas with a tandem tow of Dump Scows. I looked at him and said only if you wanted to get your ass kicked and most likely have to chase down lose scows all night.

The Captain got very quiet and said that on the West Coast that would have been nothing but he would never again do it again in a place like Boston. We all sat around talking about different ports and what made them difficult or easy. It was interesting for me as a CE to the different ways that things were done on both coasts.

A guy who worked at PMI went to work for Vane as a Port Captain in Seattle. Hopefully he’ll be able to work with the Port Engineer(s) to transition those boats to west coast towing. Cut off the bars and install pins.

transition those boats to west coast towing. Cut off the bars and install pins.

Is this actually on the “to-do” list? If so it’s a sign VB is in this for the long haul.

Pretty sure they are just there to bunker. And didn’t have any problems getting there towing from Philly

they must be doing ok if they are going to keep expanding on the west coast.