The Coasties did it again finding that guy floating around in the gulf. He had no hope of rescue.
it has always been my opinion this is what they do best.

bet he was standing at the rail pissing. probably pretty sober by the time the plucked him out.

I think a merchant ship spotted him and called the CG, they should get some credit

It was only luck. He really didnt have a chance
Maybe they had a lafluer (sp?). Picked him out with infra-red. But still he is one lucky sob

Guardian online news the only place I can find the vessel mentioned, but the TV report I heard definitely said the Coast Guard responded to a vessel (“containership” I believe they said) reporting, “a man in the water.” Obviously somebody’s lookouts are awake and doing their job!!

“Six hours later, crew members from the vessel Crinis discovered “a person in the water”, the USCG said.” 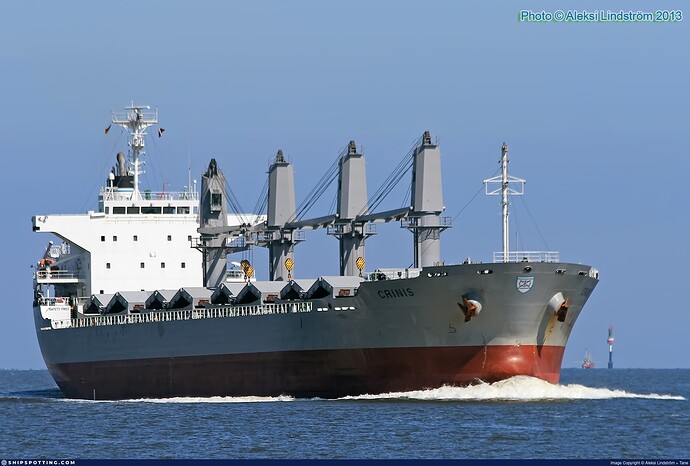 Maybe they had a lafluer (sp?)

Can’t wait to hear his explanation on how he fell off the ship.

My guess is he climbed up on a couple of the lower rails to piss overboard
When I was a surveyor in California alot of dead fishermen were found floating with their zippers open. The railing on cruise ships are about 4 ft+ high.

Yep, fueled by booze. We may have crossed paths in San Francisco. I ran boats for Weststar during the expansion of the airport runways. I’m down the road from you now near Vero Beach.

I was a surveyor from 1978 to about 2018. Scherfi bought the business from a guy name Buzz who had an old Mickey. I introduced Buzz to his wife. they were at pier 46 as I recall, now the ball park.
sherfi didnt like me because A I wouldnt approve an Ocean tow for him with a tiny tug called the bear cat that he wanted to tow a small barge with a dredge on it to Hawaii. I told him it didnt have the range. he loaded it down with 50 gallon drums of diesel on the back deck and 3/4 of the way there they ran out of fuel and had to wait for more out of hawaii. he wouldnt admit it that i was right.
I worked on the new bay bridge project for ten years as their surveyor. They rented barges from westar so he had to put up with me. I was also was part of the demolition and removal of the footings. If I didn’t retire i would still be making good money working from the Manson Kiewit AJV.

Blu and gold ferries and later WETA were also my accounts. I can say now that I was numero uno as bay area surveyors go

The work I did for Weststar was around 2001 after I came back from a hitch in the Persian Gulf. I also worked freelance for a sailboat charter company at the time. I remember spending a pleasant afternoon showing the ballpark project superintendent around the bay on a day sail. It was how he chose to celebrate the completion of the job away from all the hoopla.
San Francisco was a great place to live back then.

i helped put the coke bottle slide up there. we had to do it on a sunday as they were afraid of coca cola protesters or some such nonsense that prevailed at that time. I was their when it was fun late 70’s and before Fienstein ran the navy out of town and thousand of jobs were lost. Like you I am sure, I am glad to get out of there it was getting insane. Samsula is more to my liking.

Ours is mounted on the mast. It’s useful to see over the barge, day or night. Very good for spotting sea ice.

I don’t run it a lot because its another monitor flooding my dark wheelhouse with too much light and destroying my own night vision.

You’re right, I mispoke. The word radar isn’t part of the acronym and I’m aware of how it works, having used it myself. I removed the term “night vision” from my original post so as to not sound condescending to an experienced surveyor.