so is our own bellicose reality TV clown president painting us into a corner where he will be forced to start a preemptive war with North Korea to save face? such statements as this seem to be steering the nation to a place were war on the Korea Peninsula will become inevitable. President Trump vows North Korea could be met with "fire and fury" if it continues to threaten nuclear action against the U.S.

the question we must ask is how ugly will such a war be? as long as it stays conventional, we can all expect a massive sealift to get US forces into the Korean Peninsula which will make 1990 and 2003 seem like a dress rehearsal. If the balloon does go up, who wants to man the sealift fleet? Do you see it as a needed war which was inevitable and must be fought or do you see it as Donald the Clown’s folly we are getting forced into because of his big mouth and more immense ego?

I have a hard time believing USA wants a confrontation with China over a shithole like NK. Trump is a buffoon, why waste American lives on something that is a East Asian problem? Let China deal with NK. If USA comes storming in guns blazing China needs to draw a line to save face, and then you have a shit show.

I’d go to sealift in a heartbeat. I’m in full agreement with you on all counts there too. I do not wish for war, but if war comes, may it be quick and decisive and may we rid the world of this menace. Kim… not Trump… though maybe both? Seriously though, I don’t think that the world can risk N. Korea’s mental instability and having nuclear weapons they’d willingly sell to every despot in the world.

“There is no avoiding war; it can only be postponed to the advantage of others.” -Niccolo Machiavelli

What’s the big deal about N.Korea? If they get a nuclear weapon so what?? The USA can knock it down with their trillion dollar missile defense system, right? Big IF on NK having a small enough package for their generation I missile to deliver. Do NOT believe what the DIA says, they have been politicizing their intelligence for years.The NK might get one to someplace in the USA if the wind is blowing right and then what? They get annihilated? MAD mutually assured destruction is a good deterrent, been working for decades. Besides those few facts why are we suddenly concerned about N. Korea and not India, Pakistan or others with nuclear weapons? Is China, Japan or South Korea concerned, N. Korea is right next door. Let them sacrifice their money and people to take care of the problem. The USA cannot afford to take care of their own country and citizens right now.
Of course if you are a USA defense contractor or general/admiral then you can use this to increase “defense” spending and get even richer. If all you have is a hammer everything looks like a nail.

If he is insane enough to lob an actual ICBM our way all bets are off however.

I would encourage everyone to read this article. 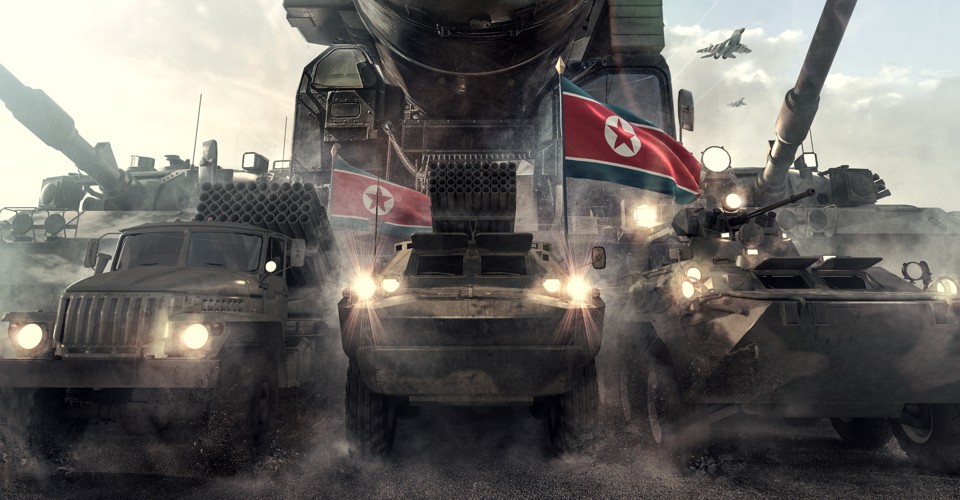 How to Deal With North Korea

There are no good options. But some are worse than others.

Thanks for posting this! Absolutely a good read.

MAD mutually assured destruction is a good deterrent, been working for decades.

MAD only works if both sides believe the other will actually use nukes and as long as one side isn’t of the opinion that the big yankee bully won’t risk pissing off China and Russia. Personally, I have zero faith in THAAD knocking anything out that hasn’t been extensively pre-planned to the millimeter. I also have zero faith that Kim won’t do something even more stupid than Cheeto. North Korea isn’t India or Pakistan, or even Iran. We’re still technically at war with the DPRK, so them testing new weapons of war… is kinda like us with the Manhattan Project. I see that as a case of “not if… but when?”

I do know that we’re past the “Acceptance” stage now though. Which of the other three options is taken? We’ll just have to see.

First, his title is Supreme Cheeto. He is at least equal to the other pudgy whackjob with the weird haircut.

Second it is difficult to do anything more stupid than the Supreme Cheeto.

let’s get back to why I started this thread…if the US is marching towards a conventional war in North Korea then there would be a resultant surge sealift but how big and for how long?

so say the US starts with massive airstrikes against every North Korean military asset. We get their air assets first including their missiles. The USAF has ammo stockpiles in South Korea and in several vessels in the prepo fleets at Guam and Diego Garcia, but how long can we keep up pressure from the air before more ammo is needed from the CONUS? Also, airstrikes alone still leaves a huge land army intact on the north of the DMZ. The US would still need to move a good many divisions into the theater to strengthen the border. We are still speaking of a minimum two months to get those first divisions into Pusan and deployed north. The US doesn’t have that many RRF ships on the west coast so that means loading on the east coast then transitting the Panama Canal then the long haul across the Pacific. Such long distances mean the ships cannot turn around so fast so more ships would be needed thus more mariners to man them.

Like I said before…it would be a bigger show than even 1990.

then there are the imponderables…if we destroy the North Korean air force and then bottle their army north of the DMZ what will that miserable PHAT PUNK do then? Negotiate for peace hopefully leaving him in power? Lashing out with the nukes? God help each and everyone of us then when nukes are used because every single bet is off and we enter a new world no one of the planet has ever lived in.

I think he would not use the nukes nor sue for peace which leaves us in a terrible position. do we allow him and his cabal to continue to exist or do we force regime change which ain’t so easy unless you take the capital Pyongyang and install new leadership. That one is where is gets messy

If this does go down the road of armed conflict, which certainly seems far more plausible than it should with the current shortsighted and knee-jerk administration, I can only think the sealift would be smaller and far more hectic if only by virtue of the fact that 3/4 of the boom boats MARAD dragged out of James River, Suisun Bay and Beaumont for additional tonnage have been scrapped or been heavily parted out and left to rot.

So to fill this tonnage void, the call would have to go out to the Merchant Marine fleet and would probably impact west coast container and tanker carriers most heavily until additional tonnage from the Hapag Lloyd/Maersk Sealand line vessels could be brought off charter and moved into position. I’d imagine a fairly large amount of transshipment and consolidation would take place in Honolulu, so existing tug/barge tonnage would more than likely be employed on regular USWC-Hawaii runs bring beans, bullets and black oil out for loading onto fast movers that would bring it into theater.

You forget we also have how many LMSRs on top of the CAPE D, E, H, I, K, O, T, V and Ws plus the FSSs and oddballs like the ADM. CALLAGHAN. ( if i goofed this list, pls feel free to make any corrections)

I went past the James River fleet a few weeks ago. There’s less than a dozen ships left, most are old stick ships with an oiler or two thrown in.

Very true, the MSC and MARAD have done quite a bit of modernization since Gulf War 1 and much of it was sorely needed. But the majority of the LMSR’s and MARAD Cape-X class boats are primarily vehicle carriers with the ability to haul containerized freight, and even then their TEU capacity is pretty light. There will have to be some pure container ships thrown into the mix to bolster the lift.

Same thing for liquid bulk vessels. MARAD has three semi-modern tankers laid up in Beaumont at the moment and one 1960s build carrying the SALM system, which would hardly be enough to support a military operation.

Agreed that there are close to zero tankers in the RRF and that only TACSs are cellular but there are all the civilian containerships on longterm charter to MSC which can run to where ever to get more ammo once they unload in Pusan.

Ultimately, the DoD cannot do any massive sealift without some foreign ships but I well imagine they will come for the money MSC will be willing to pay.

I dunno, he seems to be able to out do himself even while staying busy promoting his gold courses at taxpayer expense. He hasn’t had time to appoint an ambassador to South Korea he has been so busy.

Trickle down ignorance. It will be interesting to see how Dumbo reacts.

The funny thing for me is none of newscaster has ask how his guidance system work, Having worked with few rocket guys before they have all said the same thing, Getting it up in the air is the easy part now getting it get to a small place is another location is guidance invlovd., NK; not real good with that. The entire matter is silly. None of the USA business anyway

You know what they say about horseshoes, hand grenades and nukes, “Close is good enough”

Landing a nuke in the Nevada desert or the Cascades will do the job quite nicely as far as the end of our world as we know it is concerned.

I dont think there would be any US boots on the ground, just a few carefully placed shells from subs and ships to carefully aimed targets so Kim could choose to pretend it never happened but he would learn like Gadaffi did.
Lets see if the UN allows it, the whole NK problem was created by China and allowed to fester