Captain Paul Watson was arrested in Germany over the weekend and will be extradited to Costa Rica on an outstanding arrest warrant from an incident which occurred in 2002 involving a Costa Rican vessel called the [I]Varadero[/I] in Guatemalan waters illegally hunting for shark fins. Watson is fighting the extradition.

I wonder how a Costa Rican jail will feel for this terrorist.

Should have happened long ago. Throwing nets in ships wheels thousands of miles from shore. Not to mention the ramming, boardings and acid bombs.

I hope he rots.

I agree that Watson is an egomanical buffoon who has built a multimillion dollar franchise out of that floating clown circus called the Sea Shepard Society yet I am not at all in favor of the decimation of the world’s sharks to feed some insatiable need in China or Bluefin tuna to feed the rich their uber sushi meals in Japan. Almost all shark species are in decline by rampant overfishing that takes only the fins and discards the live sharks to die in the sea and Bluefin are headed for near extinction at the rate their being taken totally in contravention of the UN’s own mandates. There is no sanctuary anywhere on the planet for those majestic fish.

The killing of a handful of whales in the Antarctic is nothing but I hate that the Japanese are using a bullshit excuse of research for an obvious commercial enterprise and what is really so much worse is the wholesale slaughter of Rino’s in Africa for their horns or the rampant killing of Tigers in Asia for their penises just to make super rich old shrivelled Chinamen think that they’ll be able to get a boner. Fuck you guys…take Viagra like the rest the poor shrivelled old men on the planet and save those precious animals. A handful of those magic pills and you’ll he hard for a week and then you can screw all the young whores you can afford! The rich in China are headed towards taking over the world AND FAST!

As far as whatever Watson eventually gets in terms of punishment over this charge, count on him to collect even more $$$ now from all the soft hearted suckers out there starting with shrivelled over tanned Bob Barker and that stupid bimbo Darryl Hannah. I used to think she was hot but she is NOT.

I see no problem in taking and eating shark fin as long as the rest of the shark is kept onboard and utilized. As far as species decline, I would need to see some more data other than the few reports put out by these ultra left deceiving enviro groups. If its true, put them on an endangered list.

Regardless his incompetent, dangerous tactics are going to get someone killed. This should be a debate over the legality of his actions, not the morality of his victims actions.

I guarantee if they stopped whaling and shark finning tomorrow, all we would see are more attacks on oil rigs like we did last year on the rig Leiv Eiriksson in the Arctic or when Xena climbed aboard the Shell Rig. What a joke.

sorry but I can’t resist this one… 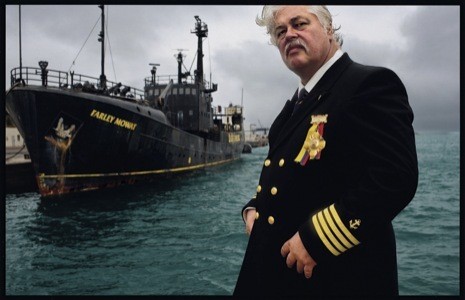 does this uniform make my head look fat?

You’ll never find them in the “epilet” locker.

You’ll never find them in the “epilet” locker.

Oops. Bad spelling. How about epaulette.

Maybe he can wear that to his trial along with a Napoleon style hat.

I was very happy to hear that Germany has detained Sea Shepherd’s Captain Paul Watson for possible extradition to Costa Rica. I understand that the warrant for Captain Watson’s arrest is due to an incident in which Sea Shepherd attempted to sink a ship and kill Mariners at sea.

I support using international law to shut down the Sea Shepherd operations and halt their reckless actions endangering international shipping and the mariners that man those vessels. I urge you to expedite the extradition of Captain Watson to face justice in Costa Rica.

You must have sharpened your stick…

As far as I am concerned, what this sportfisher did should be illegal and punishable by prison time just as killing a white rino or asian tiger would be!

The fish of a lifetime’’ is how Nathan Adams describes not one but two amazing catches.

A possible world record bluefin tuna and a record black marlin were among the haul the Muriwai fisherman and friends pulled in on his six-metre ‘‘tinnie’’ Western Break during a ‘‘fantastic’’ week of fishing.

The 335.4kg Pacific bluefin has yet to be verified as a world record. Last year a 342kg fish, in perfect condition, was sold in Tokyo for US$396,000.But it and the 358kg black marlin have already set Muriwai Sport Fishing Club records and are being prepared for mounting by renowned taxidermist Kevin Flutey.The tuna will hang on Adams’ wall in Muriwai if the 42-year-old can convince his wife Lisa.

‘‘Probably in place of a 30-pound snapper - but she says it will be like mounting a sofa,’’ he says.

More than likely it will end up at the Muriwai surf club and community facility which is still under construction. That’s where the Muriwai fishing club, of which Adams is a member, will also be based. Adams says he’s been chasing a black marlin like this for nearly 20 years but it will be up to its catcher Alan Langdon of Riverhead to decide where it will go.

That’s not the end of this incredible fishing story either. The fishers involved caught 12 billfish in 11 days. They released most of them except the record catches.
They hooked the bluefin near Houhora off Northland’s east coast and then the black marlin off Ahipara on the west coast as part of the New Zealand Sport Fishing Council Nationals competition from February 18 to 25. That meant the two big fish cleaned up several major prizes, including Langdon winning the New Zealand champion angler billfish title.

A friend’s daughter, 16-year-old Jessie Wright of Muriwai, was also fishing on the boat. She caught five marlin, including a 136.6kg one which made her national junior striped marlin champion. Her two older brothers won prizes too. Logan Wright was second in the champion line weight section with a 144kg marlin caught on the same boat.

(post withdrawn by author, will be automatically deleted in 24 hours unless flagged)