Everybody wants a piece of the Offshore Wind Industry: 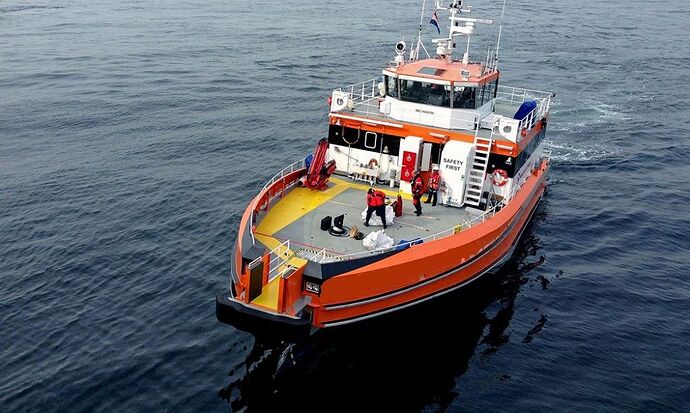 Normally used to transport yachts, but everybody needs to step in to help to develop renewable energy as fast as possible: 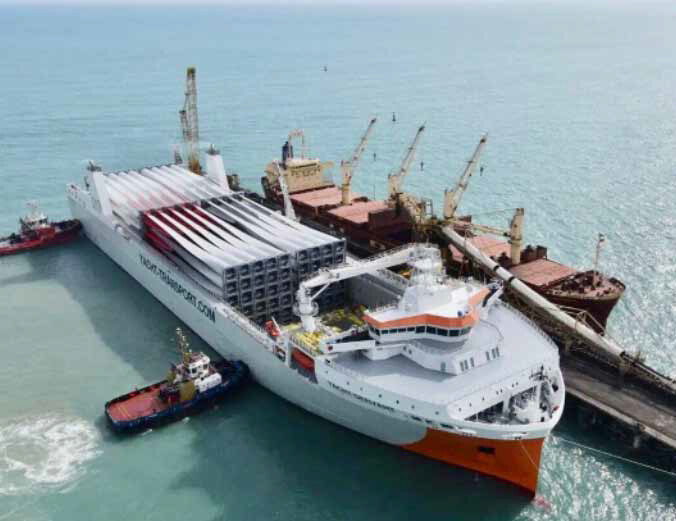 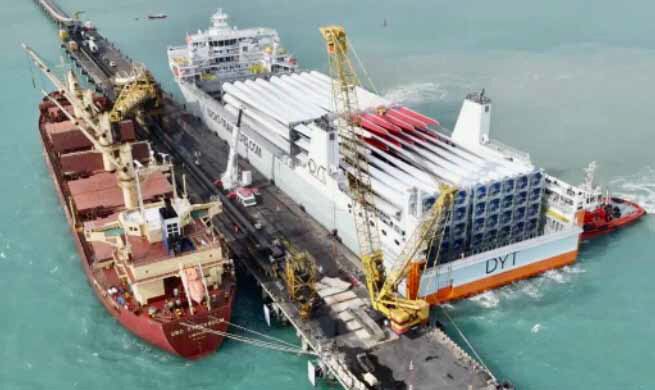 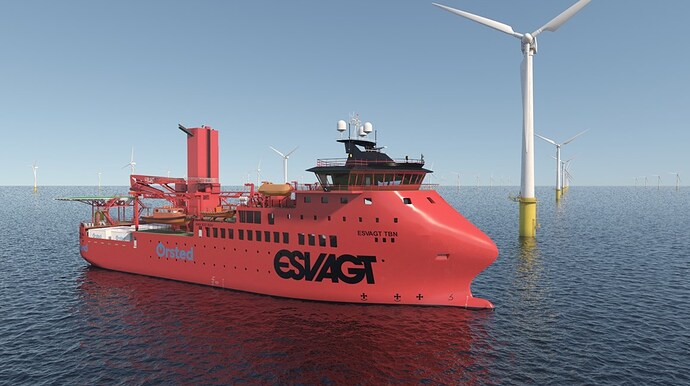 Hav Design to develop methanol-fueled SOV for Ørsted in UK -

She shows the scars from a hard time working off USEC: 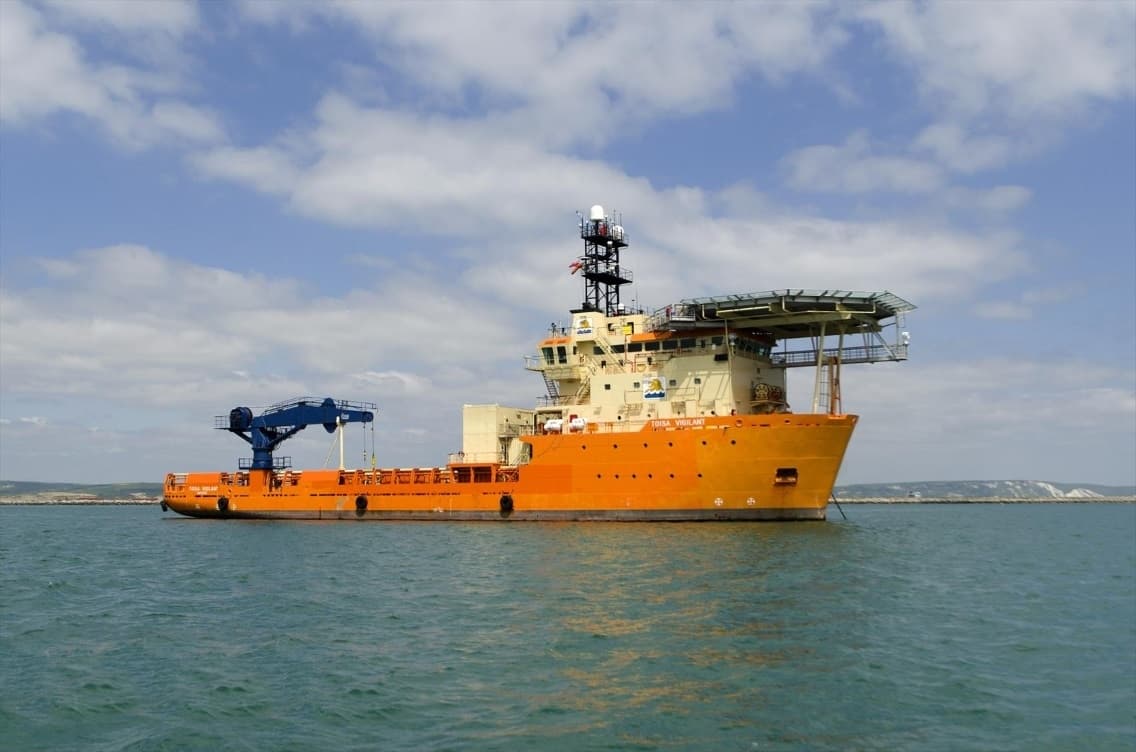 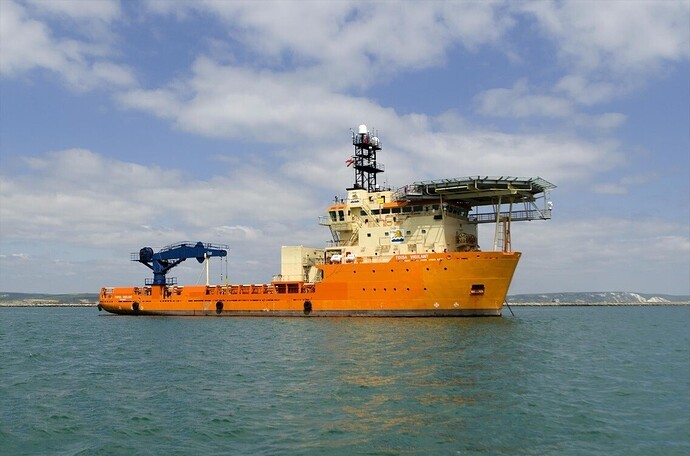 Geoquip Marine of Switzerland has added a DP2 multi-purpose offshore support vessel (OSV) to its fleet. .. 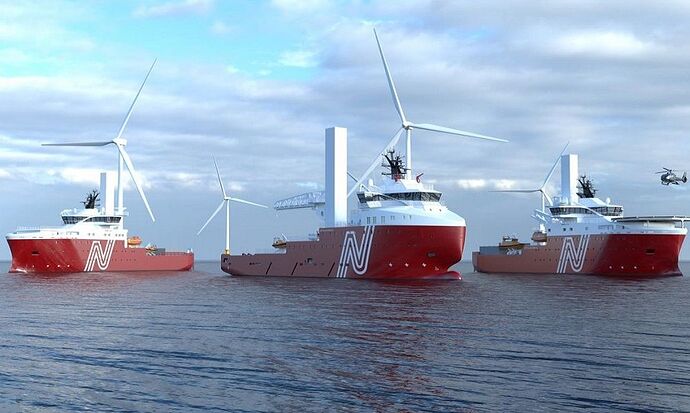 Navigare Capital Partners has made its first investment in the offshore wind support vessel segment.  The Copenhagen-based alternative investment fund manager, which has containers, bulkers, tankers and LNG carriers in its portfolio, has...

New pipelay vessel under construction at Qingdao Wuchuan Heavy in China for Shanghai Salvage Co. Ltd. Due for delivery Aug. 2023 and intended to be on long term charter to Norwegian Offshore Construction Contractor Havfram: 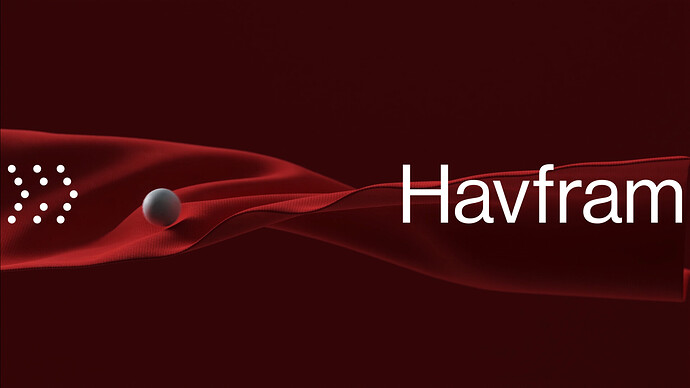 Utilising the experience from Ocean Installer to form our future – aiming to become a global leading company in the energy transition. 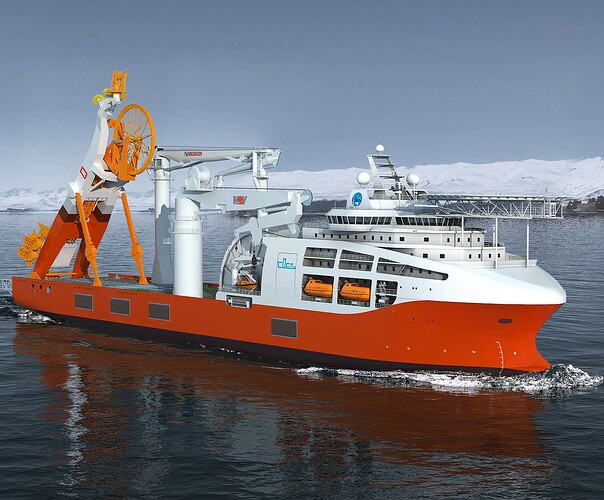 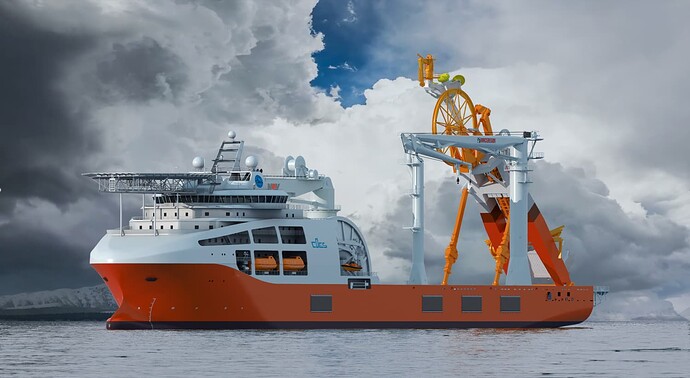 MPCV Shen Da Hao is a VS 4235 design Tier 1 Pipelay Vessel utilising the reeling method. It will be completed, tested and delivered by mid-2022.

Purpose-built vessels, designed specifically for advanced maritime operations in the development and service of the offshore wind market.

Norwind Breeze is out on her first sea trial after conversion at Vard Brattvåg: 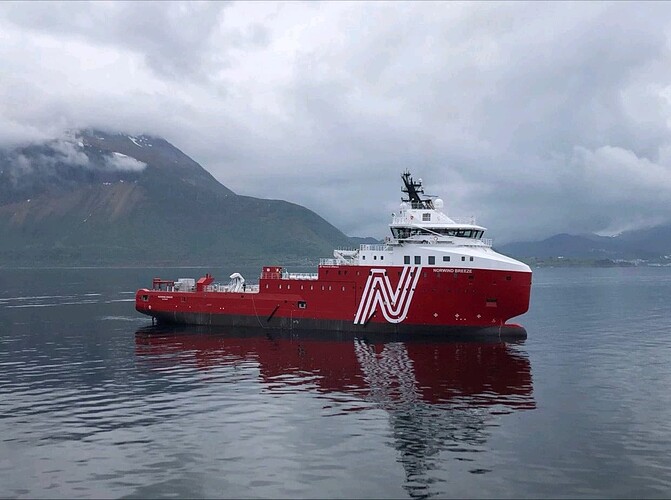 All Norwegian designed PSVs and many other types of vessels have passive anti.roll tanks,
A number of them have been converted to SOVs 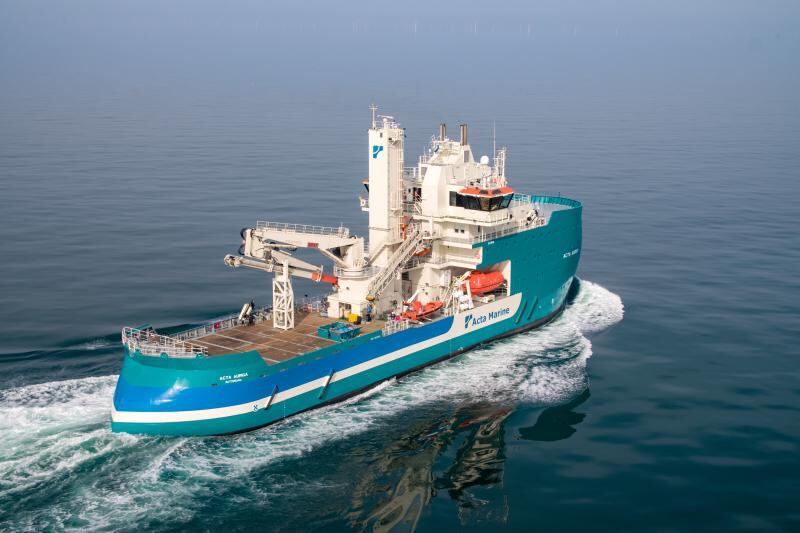 Acta Marine has signed a contract for the construction of two next generation Methanol MDO/HVO powered DP2 Construction Service Operating Vessels (CSOVs) at Turkish shipyard Tersan with two optional vessels for delivery at a later stage. The vessels...

This time to be powered by Methanol and built at Tersan Yard, Turkey, but still designed by Ulstein.

Acta Marine is a maritime support provider with a versatile fleet of over 40 vessels. We operate globally; supporting clients working on coastal infrastructure and offshore energy projects. 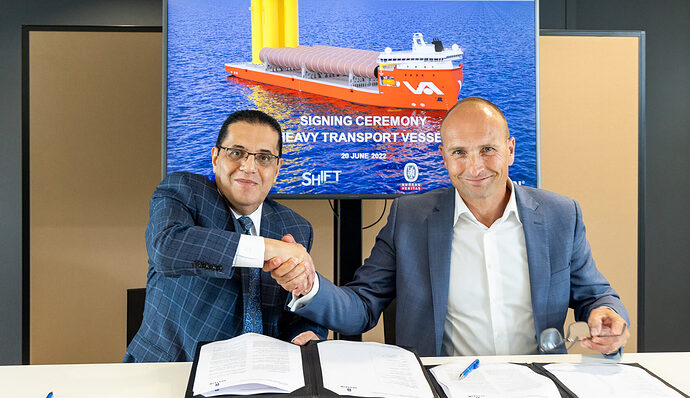 Designed for worldwide operations, the Heavy Transport Vessel (HTV) of the ULSTEIN HX120 design will serve the growing transport demand in the offshore wind industry as well as for LNG modules and offshore structures. Her dimensions are optimised to... 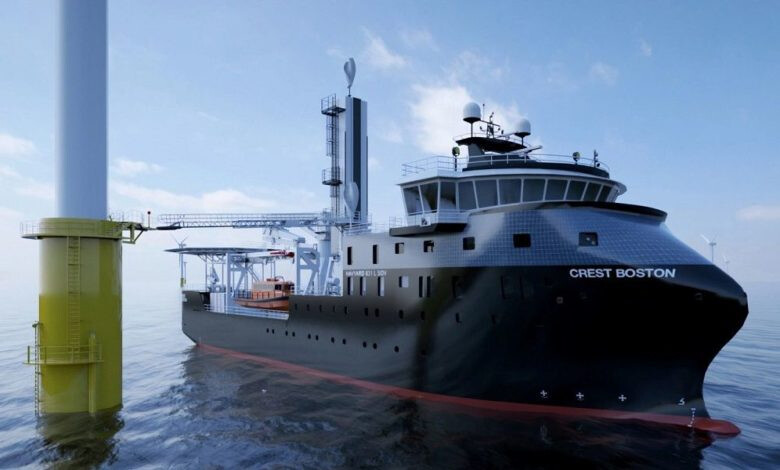 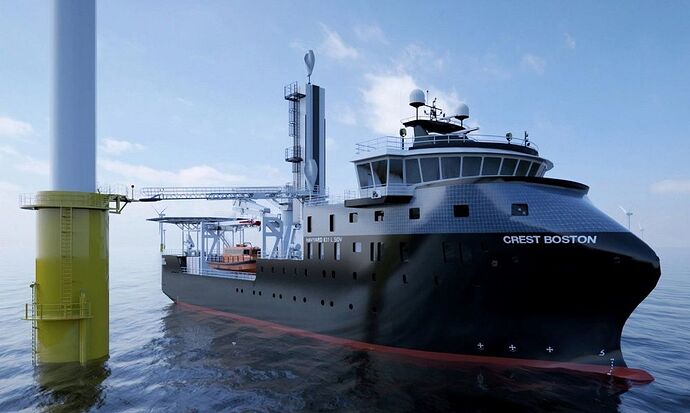 Crowley and Esvagt bolster SOV ties in the US - Splash247

The venture was created in 2021, under which Crowley will own and operate the vessels crewed by US mariners, while Crowley and Esvagt will share in the financials of the venture. 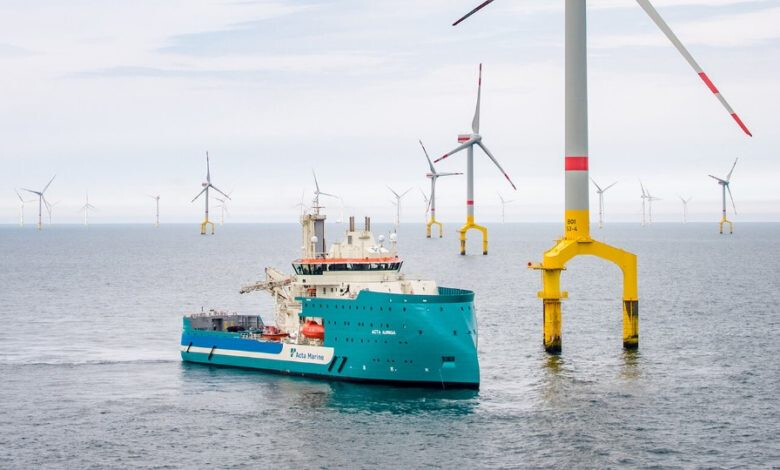 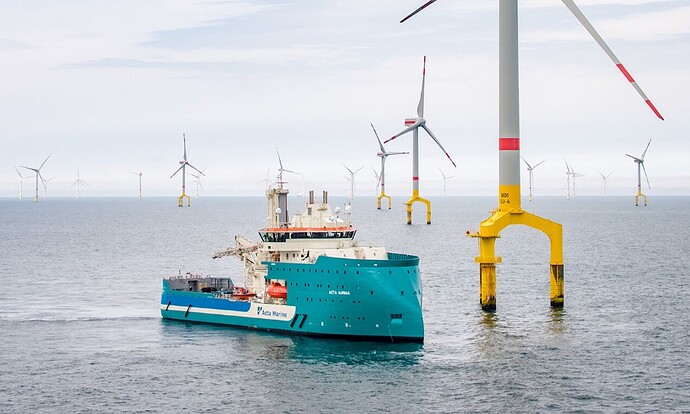 No access to capital is a big one, since upstream oil and gas companies are still unpopular. GoM operators are involved in peripheral ways right now- for example, tidewater is using the Regulus and Polaris to perform seabed sampling and bathymetric surveys. Fugro Enterprise is working up and down the East Coast. Listen to Tidewater’s quarterly earnings call and you will get a better idea.

The other big reason GoM operators are not involved yet is that the need for these SOVs to operate, install cables, etc is still years away. They could build a boat in less than a year, only to sit around for several more.

No need to sit around waiting for the US to get their act together. Plenty of work for purpose built vessels in the offshore wind industry worldwide. 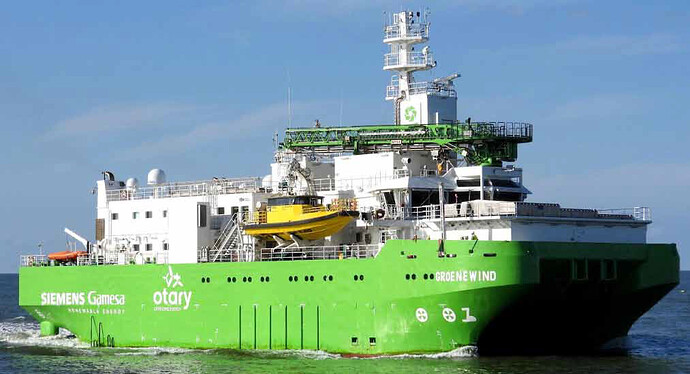 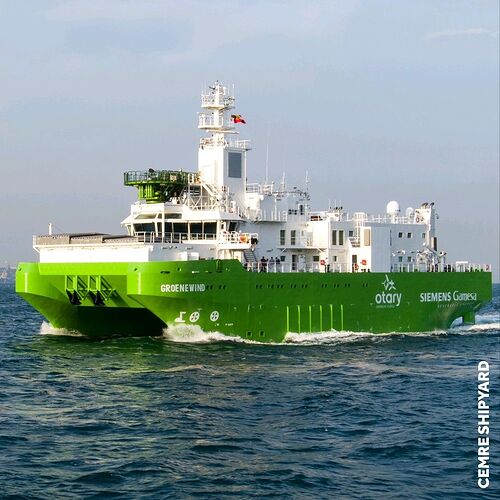 The Energean Star (built for Gulfmark as the HERMES at BAE Mobile and never worked) was sent to Poland where it was converted to work on wind farms. This is a USA built hull, ready to work. 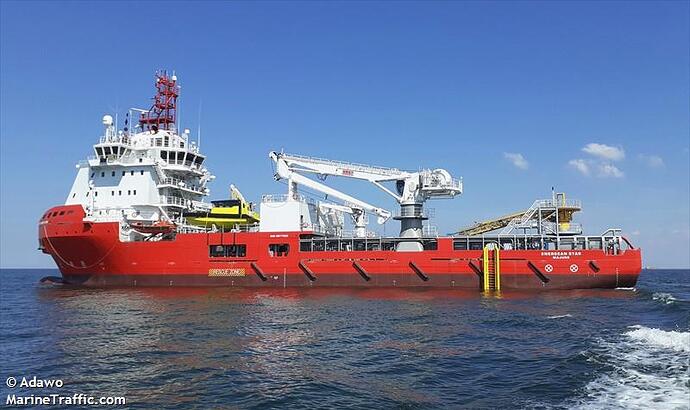 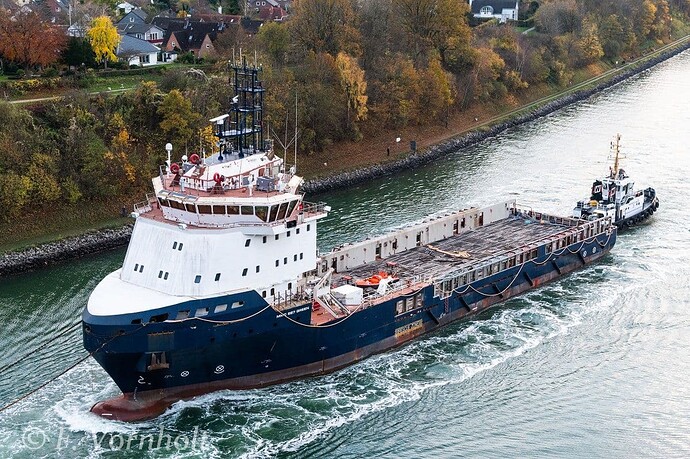 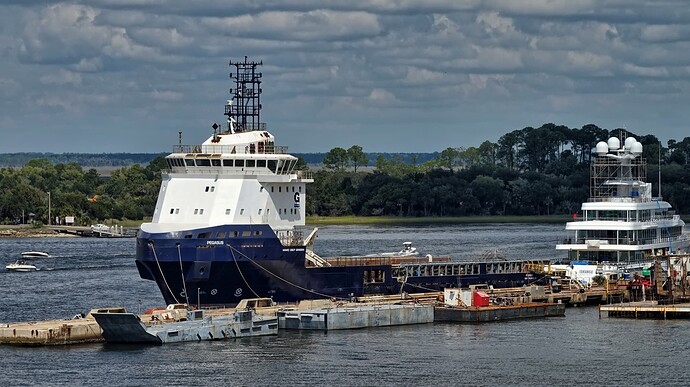 The stern is a bad place to put a walk to work gangway on a ship as there will be a lot of movement there when the vessel pitches.

The best place for a walk to work gangway is at the transvers axis where there will be the least movement when the vessel pitches.

As can be seen on pictures of both purpose built and converted SOVs above.

Olympic are getting in on the SOV game.

They seem to be getting speculatively built without charters lined up, at least I don’t think a charterer has been publicly announced, perhaps they have one but it is not public knowledge.

Some companies are speculatively building SOVs without a charter, then they are winning charters when the vessels are already half built.

Other companies are taking a more conservative approach and only committing to build vessels when they actually have a charter lined up, but the speculative approach of building SOVs without a contract seems to be winning companies business.

Companies need to have a lot of capital available to take the speculative build approach, a lot of companies probably don’t have that kind of money lying around.

Norway-based Olympic has signed firm contracts with Ulstein Verft for two Construction Service Operation Vessels (CSOVs) and options for two additional CSOVs, all of which are based on the SX222 design with TWIN-X Stern from Ulstein Design &...

More details on the Olympic vessels: 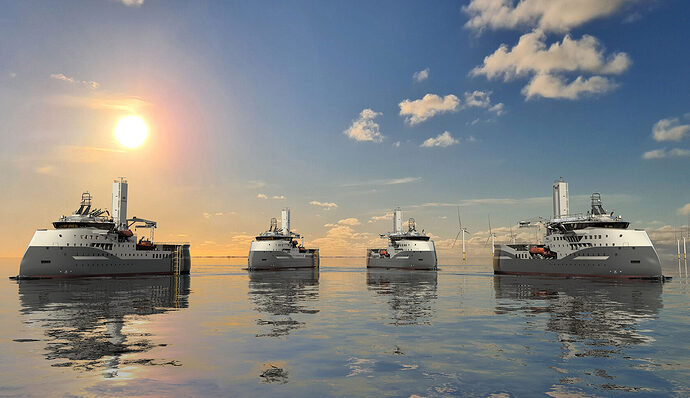 Olympic contracts two firm Construction Service Operation Vessels (CSOVs) and two options at Ulstein Verft. The vessels have hybrid battery propulsion and are prepared for methanol fuel to enable zero emissions. They are based on the ULSTEIN SX222...