More discussion on the future of Arctic shipping and energy extraction

obviously there are two Arctics to contend with. A summer one with no ice cover and a winter one with 8/8 sea ice.

The Polar Code will not include a ban on use of heavy fuel oil, and environmentalists fear a shipping accident causing a heavy fuel oil spill will have dramatic consequences for fragile Arctic eco-systems.

Russia has already started to upgrade Northern Sea Route infrastructure and plans to build ten new search-and-rescue centers. At a recent conference, Anton Vasiliev, Moscow’s ambassador to the Arctic Council, expressed his confidence in Russia’s readiness for the next wave of northern shipping within three or four years.

Research into oil spill response is on-going globally and techniques employed successfully during the Gulf of Mexico Deepwater Horizon response have received increased interest. In 2010, controlled burning of spilled oil with fire booms eliminated between 220,000 and 310,000 barrels of oil that could have otherwise reached shorelines and other sensitive resources in the Gulf of Mexico.

A report released this month by the Arctic Oil Spill Technology-Joint Industry Program discusses the in-situ burning of spilt oil in detail. Research has been conducted on this method since the 70s and has demonstrated on-ice burning of spilled oil could remove almost all of the oil present on an ice surface with only minimal residue.

Each season presents different drawbacks and opportunities for in-situ burning, states the report. Mid-winter, although associated with long periods of darkness and cold temperatures, provides a stable ice cover that not only naturally contains oil within a relatively small area but also provides a safer working platform for surface oil removal. For spills under or on fast ice, there are a range of effective burning options which can result in very high removal effectiveness. Options to deal with spills in moving pack ice are more limited and likely to result in highly variable removal values depending on a variety of natural conditions and logistics constraints. In these conditions it is often only possible to track the oil until it is released from the ice the following spring and ignite and burn it then.

Environmentalists remain concerned about the oil spill management measures that have been proposed to date. Environmental organization Oceans North says spill response could be delayed for weeks at a time due to the often hazardous conditions, especially during the winter. Oil persists in Arctic environments longer than anywhere else. It can become trapped under sea ice. It also evaporates at a slower rate in cold temperatures. The environmental conditions that characterize the Arctic – sea ice, subzero temperatures, high winds and seas and poor visibility – influence the effectiveness of clean up strategies and how much oil is recovered.

Much of what is known about the long-term effects of oil in a marine environment comes from the 1989 Exxon Valdez disaster when 250,000 barrels of crude oil spilled into the pristine and sheltered waters of Prince William Sound. This was the largest oil spill to occur in close proximity to the U.S. Arctic although it happened in much more accessible conditions.

The Exxon Valdez oil spill was directly responsible for the deaths of an estimated 250,000 sea birds, 22 killer whales, 2800 sea otters, 300 harbor seals and thousands of fish. Even today, researchers believe species such as sea otters may be impacted by the remaining oil because they forage on bottom-dwelling species, stirring up the oil that still remains on the sea bed. More than 20 years after the Exxon Valdez spill, scientists estimate that between 16,000 and 21,000 gallons of oil remain in the environment. The oil is decreasing by a rate of between zero and four per cent a year and will likely persist for decades and perhaps even centuries.

The organization calls for more scientific research into the long-term effects of oil in the Arctic environment, as well as adequate spill response.

I have no confidence in Russia’s readiness! Norway is still paying for the cleanup of the nuclear wrecks that was the northern fleet.

Only thing Russia is good at is fuck up and corruption.

Only thing Russia is good at is fuck up and corruption.

Don’t forget they have some hot women!

Don’t forget they have some hot women!

OH YEAH! You know it! 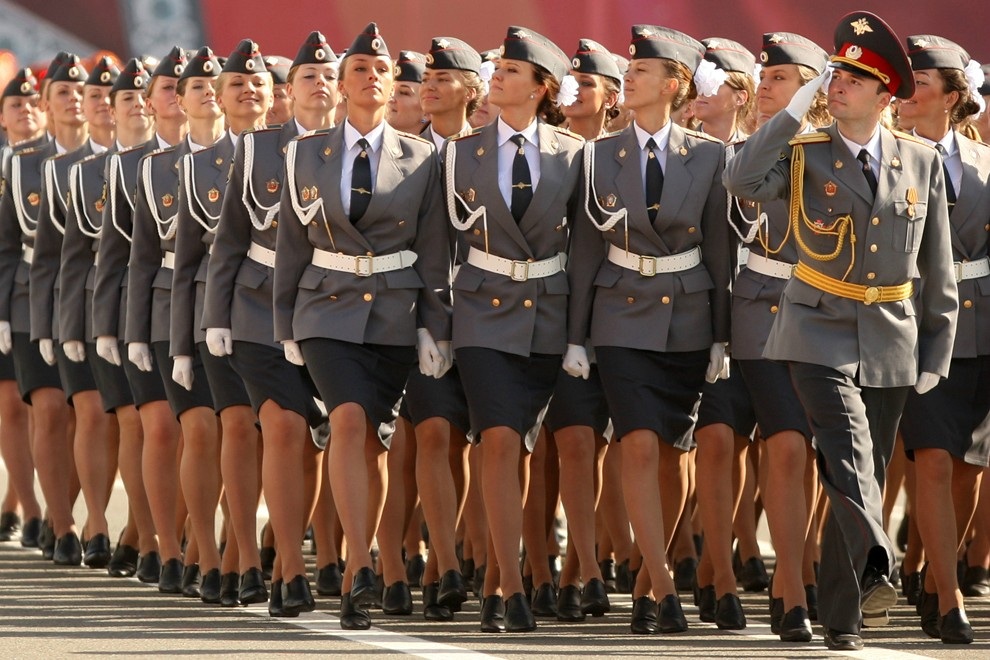 I know…recruit Russian beauties to the US and send them to KP to lean English and become mistresses to the rich and powerful. The Federal government can lease them and make a very tidy profit off that business plan! Change the name to USRMA…the US Russian Model Academy.

If I could be the officer leading them in the photo, I’d vote to keep KP open forever!

I don’t know about that. Been to Norway and I thought the girls were all pretty robust in the stern. Haven’t been to Sweden but Denmark was also not what I led to believe was the case that all Scandinavian girls were model material.

[QUOTE=c.captain;131373]I don’t know about that. Been to Norway and I thought the girls were all pretty robust in the stern. Haven’t been to Sweden but Denmark was also not what I led to believe was the case that all Scandinavian girls were model material.[/QUOTE]

What are you talking about? Where in Norway did you visit?

[QUOTE=Kraken;131374]What are you talking about? Where in Norway did you visit?[/QUOTE]

Oslo, Bergen and Alesund. I could see why Norway has such a healthy dairy industry!

just kidding you know…all the young girls were beautiful there as they are almost everywhere when you become a dirty old man like me!

[QUOTE=c.captain;131375]Oslo, Bergen and Alesund. I could see why Norway has such a healthy dairy industry!

just kidding you know…all the young girls were beautiful there as they are almost everywhere when you become a dirty old man like me![/QUOTE]

Sadly team Russia beat us in the final days of Sochi

But when you are purchasing athletes like Russia everything is possible

Kraken - Don’t listen to that cranky old ccaptain. He’s old and his eyesight must be failing.

Btw - I am most smitten by Norway’s snowboard Olympian. In my book, she’s a 10 in every sense of the word.

I’m more partial to those girls from Ukraine and Bellorussia myself, but I must say when I was in Denmark there were plenty of cute blonde chicks all around.

As far as oil trade across the pole. Economically it sounds awesome but I imagine if there was any disaster it would be near impossible to clean up. I know I wouldn’t want to go out in arctic weather trying to clean oil out of the snow and ice.

When I lived in Norway (or well, Svalbard), the place seemed to attract the prettiest girls from all over the world. Norway, Russia… you name it! :>

Took the train from Bergen to Oslo one time, and enjoyed the scenery both outside and inside the train.