Cryosphere Today shows ice coverage in areas where it is greater than 3/10th concentration.

Small private yachts transiting the Northwest Passage are advised not to enter areas where the ice concentration exceeds 2/10th coverage.

If find it hard to believe that drill rigs would need to be too concerned about 1st year ice of less than 3/10th concentration. From the photo showing the ice pack to be hundreds of miles away from the Chukchi, I find it hard to believe that there is much of any ice near Shell’s drilling site. I do however applaud their abundance of caution and committment to making absolutely sure that there is not any type of incident in the Arctic this year that would reflect negatively on future drilling.

By the looks of it to me, the entire Arctic Ocean will be pretty much ice free by 2022. Ships will soon be traversing it in summer to go between Europe and Asia! The new Panama Canal will have some stiff competition. Hell, even the McClure Strait appears now at least open enough for ships to transit!

Who said global warming’s all bad? Ok, the polarbears…but who else?

Shell’s Arctic drilling temporarily stops
Posted on September 11, 2012 at 9:45 am by Jennifer A. Dlouhy in Alaska, General
inShare

Just one day after launching exploratory oil drilling on its Burger prospect in the Chukchi Sea, Shell has been forced to halt operations because of possibly encroaching sea ice.

Shell spokeswoman Kelly op de Weegh said the company would temporarily move the drillship Noble Discoverer off the day-old well “as a precautionary measure, and in accordance with our approved Chukchi Sea ice management plan.”

Op de Weegh said Shell began monitoring the ice when it was 100 miles away using a combination of satellite images, radar and on-site reconnaissance.

The 30-mile by 12-mile hunk of ice was roughly 10 miles away from the Burger well midday Monday.

“The wind began to shift, and we made the call to disconnect from the well,” Op de Weegh said. “Part of working in ice is having the ability to temporarily relocate.”

As of Monday afternoon, Shell was disconnecting the Discoverer’s anchors in preparation to flee the site. The company plans to reconnect and resume drilling once the ice has passed by. Because the ice accumulation is significant, work could be stopped for a couple days or more.

Shell executives have stressed that even with a limited drilling season in the Arctic, they can use the time to complete initial drilling on wells in the region and prove they can safely operate in the cold, remote waters north of Alaska.

Op de Weegh cast the development as proof that Shell has “the capability to identify and track the movement of sea ice” as well as “make adjustments to maintain safe operations.”

This is just the latest setback in Shell’s problem-fraught bid to drill in the Chukchi and Beaufort seas this summer.

The company’s Arctic Challenger containment barge has run long beyond schedule, delaying the company from drilling into underground zones that could contain oil and gas. Shell also was forced to get the Environmental Protection Agency’s permission to exceed air pollution limits in a permit governing its Chukchi operations. And earlier this summer, the Discoverer dragged its anchor near Dutch Harbor, Alaska.

“What more will it take for Shell to realize that the Arctic doesn’t want them there?” Greenpeace Deputy Campaigns Director Dan Howells said in a statement. ”It’s like a bad horror movie but with a very real tragedy at its core. Shell’s ongoing failure serves as a dire warning for other oil companies and investors looking to exploit the Arctic for profit.”

Shell is for now limited to do-called top-hole drilling at its Burger site. To check for unexpected obstructions and create the foundation for the oil well to come, workers on Sunday began boring an 8.5-inch-wide pilot hole that will extend roughly 1,400 feet beneath the sea floor.

The hole will later be widened and filled with drill pipe and cement, but for now, at least, Shell has to stop there. The company is barred from penetrating areas that could hold oil and gas until an oil spill containment barge arrives nearby and regulators sign off on the additional drilling.
inShare
Tags:arctic, Arctic drilling, Beaufort Sea, Burger, Chucki Sea, Chukchi Sea, Dan Howells, Drilling, greenpeace, Kelly Op De Weegh, shell, Shell Oil Co
« Previous Post
Next Post »
Jennifer A. Dlouhy
Jennifer A. Dlouhy

So I wondering that miserable piece of shit NOBLE DISCOVERER ever went back to its anchors to work or if it’s still hinding in the brambles waiting for the big bad ice boogeyman to go away?

[QUOTE=c.captain;83271]So I wondering that miserable piece of shit NOBLE DISCOVERER ever went back to its anchors to work or if it’s still hinding in the brambles waiting for the big bad ice boogeyman to go away?[/QUOTE]

Is the big bad ice boogeyman related to the abomidible snowman in anyway?

I heard that the DISCO was supposed yo start drilling again this Monday (four days ago), but I don’t know what actually happened.

I’d really like to hear whether they tried out AIVIQ an NANUQ (and the Harvey Gulf boats) on that ice sheet. It would be interesting to know whether those boats are actually any good or just another Shell boondoggle.

Its hard to understand why they did not send the boats out to break that ice sheet up into small pieces before it arrived, so they could just keep drilling. Its not like they have time to spare.

We don’t need to ask about FENNICA and TOR VIKING II; we know that they are well proven designs that have been breaking ice in the Baltic for years. All we need to ask is: does shell know how to use them?

I am convinced that Shell can’t find its own ass with two hands as far as working in Alaska and the Arctic is concerned! 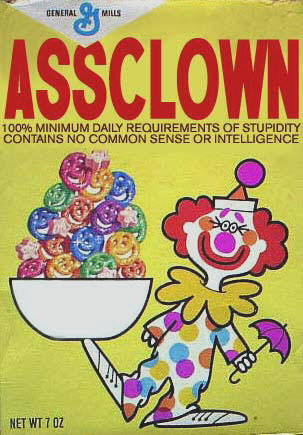 the official breakfast cereal of the 2012 Shell Alaska Drilling Program