If you have the time you are invited onboard the combined Seiner/Pelagic trawler M/V Teigenes.

First for a trip to the fishing grounds in the North Atlantic, off Ireland, catching Blue Witing by Pelagic Trawl: 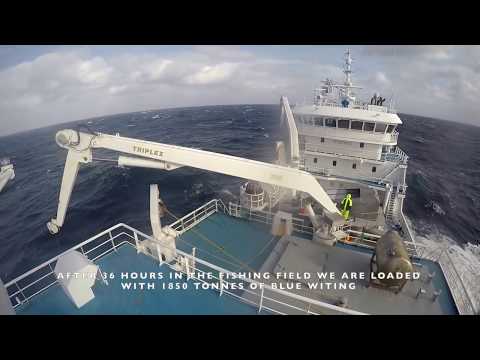 Then for a trip in the North Sea to catch herring by Seine Net:: 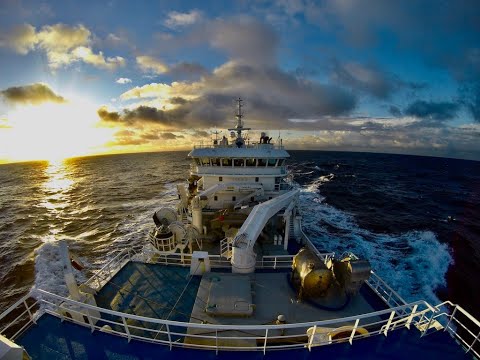 PS> Turn off the sound, the music is just annoying.

Fishing boat no more, but still at work:

Cruises around Scotland on board Nova Spero - Skarvlines

Find out about our Cruises around Scotland on board our converted wooden hulled trawler, Nova Spero. Scottish Adventure Cruises with a difference.

With a wee dram on the poop deck while watching the magical sunset.

A brand new long liner, the Antarctic Aurora has just been delivered from Vard Vung Tau. She spent 5 days in Singapore and is now on her way to her home port of Hobart, Tasmania, before starting her first tip to the Southern Ocean to catch Patagonian Toothfish:

image800×450 67.6 KB
She is Australian registered, designed by Skipsteknisk AS, Norway (ST-156L). Built in Vietnam, but packed with Norwegian equipment and technology…

PS> She may not be universally welcomed in her home port:

Longline horror should be banned from Hobart : EcoVoice – Environment News...

The 42 year old Seiner/Pelagic Trawler Siglar is in town preparing for her trip to her new home in Angola:

Looks like Kaarstensen Shipyard in Skagen, Denmark has captured the market for modern Pelagic Trawler/Seiners:

Press Release – Kongsberg Maritime is pleased to announce that it will be supplying a portfolio of SIMRAD sonar equipment for a new 75m Pelagic trawler, currently in build at...

Kongsberg’s Simrad division has long been the market leader in fish finding sonar equipment and other electronics for the fishing fleet worldwide.

Brand new Factory Trawler has arrived from the building yard in Turkey:

Olympic Prawn is 70 meters and has Rolls-Royce / Kongsberg design, machinery and deck equipment. “Olympic Prawn” is built to operate in Arctic waters and has fishing rights and processing capacity for whitefish and shrimp.

The boat was built at the Cemre shipyard in Turkey, and has a lot of equipment from Norwegian suppliers.

Fishing for Toothfish in the Southern Ocean is no “walk in the park”.
Some sub-standard vessels with “slave crew” are put into service.
Not all are licensed and follow the quota regulation under CCMLAR.
But now there are a new certification system in place:

The guy who catches the last fish in the ocean is the winner.

I recall reading a good book about the bandit Patagonian and Antarctic toothfish fishery a few years ago, but I cannot recall the name.

The guy who catches the last fish in the ocean is the winner.

It’s going to be a close race between a Sunnmørsk and a Chinese fishing vessel. Both need heavy oversight to not empty the ocean.

I can recommend a visit to the fishing museum in Ålesund, it’s a surreal place where they brag about how they have emptied the world’s oceans for different species of fish.

They are the ultimate proof of tragedy of the commons.

Nice looking boat. From the 1960’s? That is a “beam trawler”. So-called because the net is held open by an integral beam, rather than by trawl doors. They tow two small nets at once.

I have never seen a beam trawler in the US because this fishing method fell out of favor after WWII when more powerful engines and larger nets spread by trawl doors proved to be more efficient.

There are certain US fisheries, in certain places, at certain times, where trawling with trawl doors is prohibited, but theoretically, beam trawling is still allowed.

I’m not sure why beam trawling continues in Europe today. Obviously, there must be good reasons.

There are other European fishing methods, such as “Scottish seining” that have been tried in the US, but have never become established.

Arriving in a Continental fishing port as Den Helder or a English/Scottish fishing port like Great Yarmouth or Peterhead is like time travlig. Shit is old school and tragic.

Everything is oooooooooold and rundown, you can feel your spirit just sucked out of your soul stepping ashore.

My point is that Europe doesn’t give two flying fucks about fishing. And that is why Norway is not a part of the Union.

Shrimpers that I’ve seen in the GOM are very often set up as beam trawlers.

All the Gulf Coast shrimpers that I’ve seen are set up with two standard trawls with trawl doors. They tow two trawls with a total of four trawl doors from booms on each side to keep the trawl doors on one net from fouling the doors on the other. The nets are not held open by beams, so they are not beam trawlers.

Gulf Coast shrimpers sometimes use “butterfly nets” in the rivers which are like huge dip nets held open with a metal frame that are deployed over both sides.

A newer trawler for the southern North Sea:

They have two net reels aft and probably another net reel or two further forward that we cannot see. This vessel probably only tows one net at a time. You can see the chaffing bars and “pockets” at the stern quarters where the doors are normally pulled up and stored.

The odd thing about this boat is that the trawl blocks for the trawl wires are mounted so high up on the stern gantry.

The only ways to trawl without doors are a “beam trawl” or “pair trawling where two boats tow one net.

Pair trawling is another European fishing method. It has been done in North American, but not at any great scale. In fact, I haven’t heard much about it in recent years.

I don’t understand the terms “twinrigger” or “fly shooter.” The photo in the link shows the starboard side trawl door hanging over the side. That is a very high aspect trawl door which suggests midwater trawling, or that they “fly” the trawl doors above the bottom while bottom trawling.

The PDF describes a more powerful center trawl winch, so I’m beginning to believe that they do tow two nets at once. Probably why it’s called a twinrigger. Apparently, one set of trawl doors spreads both nets, and the inside wings of the nets are both attached to the center winch. I do not see why anyone would midwater trawl with two smaller nets, instead of one large net. I can see how it might make sense to bottom trawl with twin nets.