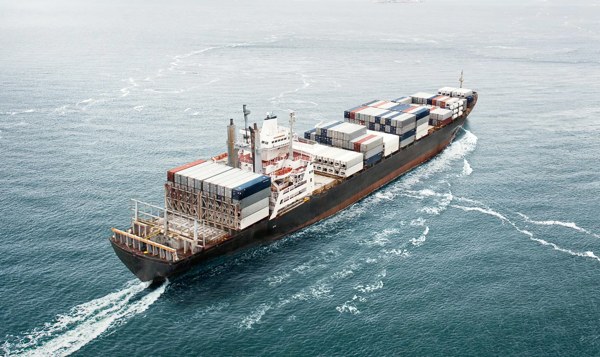 Focus should be on loss prevention to tackle risk of battery fires in...

With lithium-ion (Li-ion) batteries having an increasing impact on shipping safety, prevention measures are crucial to tackle the risk of battery fires in

Some interesting articles there, sir! I haven’t read them all yet, but the ones I did were all VERY consistent on one point: they made no distinction whatsoever about the chemistry of the Lithium battery involved - which is a major problem, as some chemistries are orders of magnitude more susceptible to fires, explosions, etc. (I was also amused by the Sierra Club article which assured me that 250 kg was “…more than half a ton…” )
It strikes me that providing incentives to shippers & users of Lithium batteries to utilize less dangerous chemistries would be a good thing, as would incentives for better packaging, management systems and safety systems. This would be in lieu of draconian regulations that would apply across the board to all chemistries. 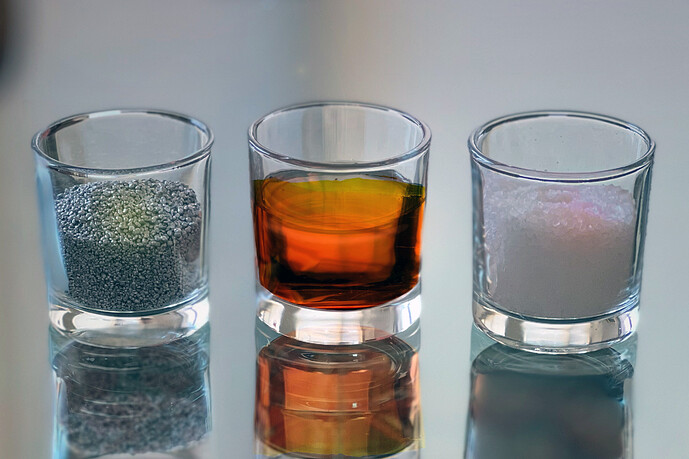 A new concept for low-cost batteries

Maybe that will solve the hazard problem before IMO manage to come up with rules that is acceptable to a majority of member states.

BTW; it is not only a transport problem. More and more ships have large battery banks on board for power supply and even propulsion. 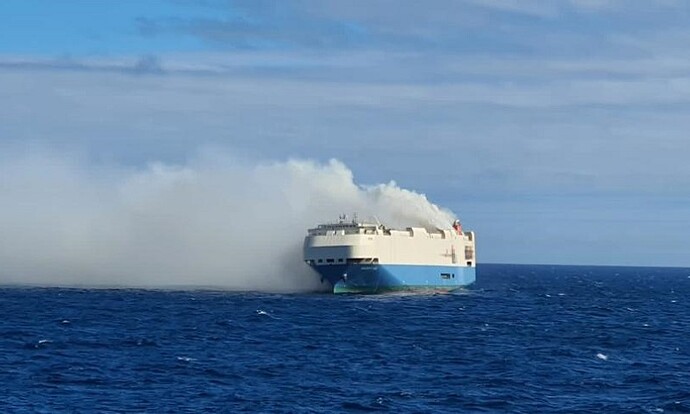 Safety checklist published for the transportation of lithium-ion batteries -...

Insurers UK P&I Club and TT Club have teamed up with scientific consultants, Brookes Bell, and issued a 21-page white paper highlighting the continuing safety threat created by the transportation of lithium-ion batteries. Recently, serious and...

Here’s a link from which you can download the P&I/TT white paper: 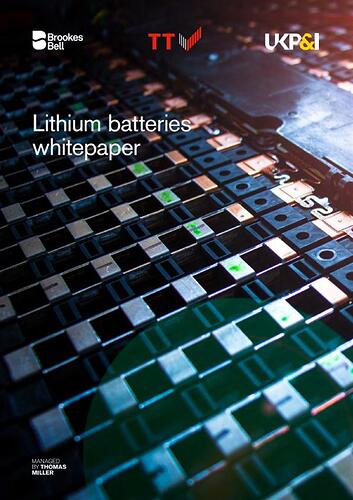 This whitepaper outlines many if the numerous challenges facing the transport industry caused by battery failure. 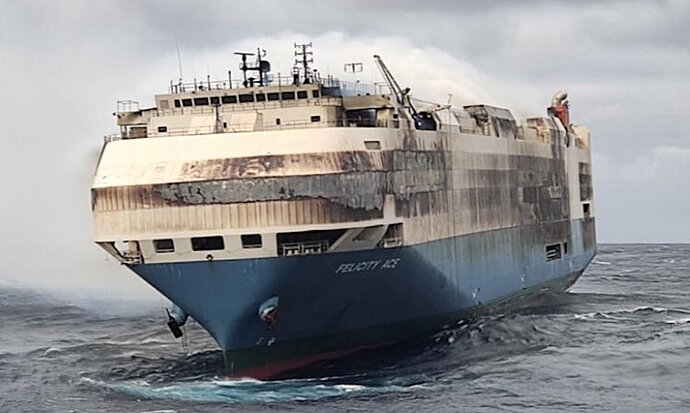 Simon Hodgkinson, head of loss prevention at West P&I, believes dedicated courses are a must to safeguard mariners’ lives. Transporting potentially explosive lithium-ion batteries on vessels is a dangerous business, as incidents in recent years...

It isn’t just the vessel’s own batteries or batteries in cargo that are dangerous. I know of a vessel lost because a big 1/2" drill battery caught on fire.
How many of you have rechargeable tools aboard?

There doesn’t seem to be a managable way of dealing with this type of fire in a confined space, which leaves the question of how can you get it overboard in a hurry ?

Havila Kystruten, which operates coastal passenger service in Norway aboard its fleet of newly built RoPax ships, is changing the rules for the transp...

Havila Kystruten is sailing in the Coastal Express Service on the Norwegian coast from Bergen to Kirkenes v.v. They will soon have 4 ships on the service, with Hurtigruten ASA operating the other 8 ships for a total of 12 ships to ensure regular daily service in both direction at every of the 34 ports of call on the 11 days round trips.

PS> Hurtigruten has not yet announced similar rules:

As usual there is confusion about what these ships are. Are they Cruise ships, Ferries, RoPax, CargoPax or…ships??

They are neither, or all of the above. The ship type sailing on the service today has evolved into a specific “Coastal Express” type of ships on this 130 year old service.

Probably wise until a solution to the fire problem is found.
Wonder if there will be a domino effect ?

The Coastal Express ships are carrying vehicles as “Accompanied” by Pax, seldom as freight (too expensive) and already very restricted by lates EU/IMO rules even for petrol/diesel cars.

Wonder if there will be a domino effect ?

Possibly, on larger RoPax ferries on international routes but hard to see the regular car/pax ferries on short crossings being able to ban EVs.
PS> Especially in Norway were >80% of new cars sold last year were EV.
(Will be mandatory 100% from 2025)

Special lanes and no under deck “stowage” of EVs, no charging while onboard, are already enforced. Additional FiFi requirement and training of crews maybe coming soon. (??)

The crew direct the drivers on where to park on boarding: 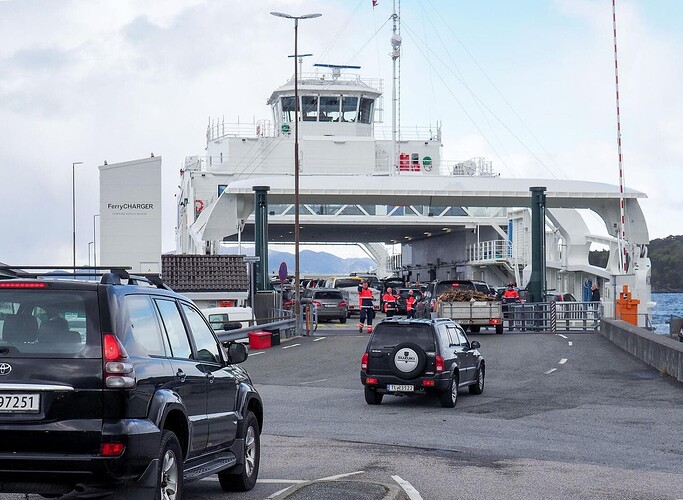 image1500×1097 186 KB
In Norway it is easy to see which vehicle is electric, since all EV has number plates starting with “E”. I don’t know how the crews see that for foreign vehicles.(unless they are EV enthusiasts)

The crew on electric car/pax ferry Kommandøren are small in number: 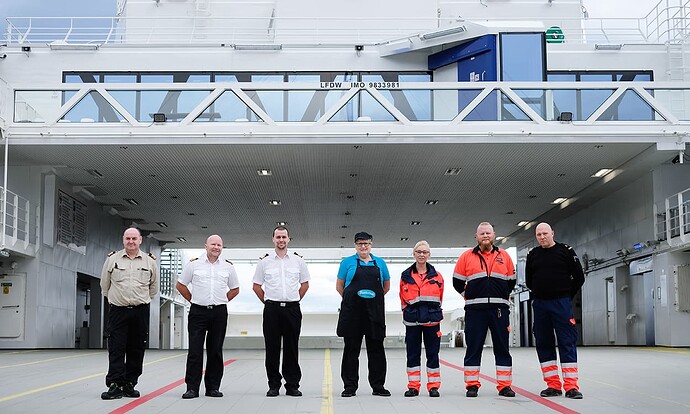 image1250×750 116 KB
They handle a lot of 35 min trips across the Bjørnarfjord on their shift, with up to 120 vehicles each way.
PS> At least they do not have to handle payment any more, that is now automated for vehicles. (pax travel free)
Ferry “Kommandøren”:

I imagine on those small vehicle ferries it would be easier to fight or dump overboard a burning EV particularly when they are not in an enclosed space and the trip is only 35 min.
But on a larger RO-RO mixed pax the problem still exists.
Wonder if it could be relevent to our Bass Strait ferries or the Channel ferries ?

Wonder what the procedures are for the Chunnel ?

There are pure-electric cars, various hybrid cars, and pure gasoline cars that in many cases are not obviously different from each other.
I get not wanting them below decks on a ferry, but having a loading worker be able to tell them apart on sight would be quite the challenge, not to mention the car owners lying about what they have.

not to mention the car owners lying about what they have.

Not a problem. In Norway people are generally honest!!

PS> Some of the smaller ferries have self-service kiosks selling “Svele” and coffee.
On the desk used to be a sign with the price and a tray for people to put their payment. (and take their change, if they didn’t have the right amount)

PPS> Since hardly anybody carry cash anymore, the tray has been replaced by a card payment terminal.

How to make “Svele” as served on the Fjord 1 ferries:

Uuuups. Have just noticed this info was posted in previous comments by other user. Pls ignore. Sorry

I would venture to say it is a temporary solution to buy time in hopes of a better solution down the line.

I would venture to say You are right.