I would say right to your venture

Travel ban: does this shipping disaster mean the end of hybrids and electric cars on ferries?

Ironically, shipping company Havila Kystruten from the electric pioneer country of Norway - in 2020 almost 80 percent of newly registered cars there had an electric drive - now bans electric cars, hybrids and hydrogen vehicles on their ferries. The ferries operate along the coast from Kirkenes to Bergen on the so-called ‘mail boat route’, which is popular with tourists.

Remarkably enough, shipping company TT-Line, which operates between Sweden, Lithuania, Poland and Germany, follows exactly the opposite route. The company installs charging stations for electric vehicles on board their ships. These so-called ‘Green Ships’ are equipped with 32 charging stations that charge the car batteries with 40 kW direct current or 11 kW alternating current while sailing.

Does TT-Line carry passengers on the same vessels while they are carrying EVs or are they pure cargo ?

Training of crews to fight fires in Lithium-Ion batteries are very much needed.
This is a good start: 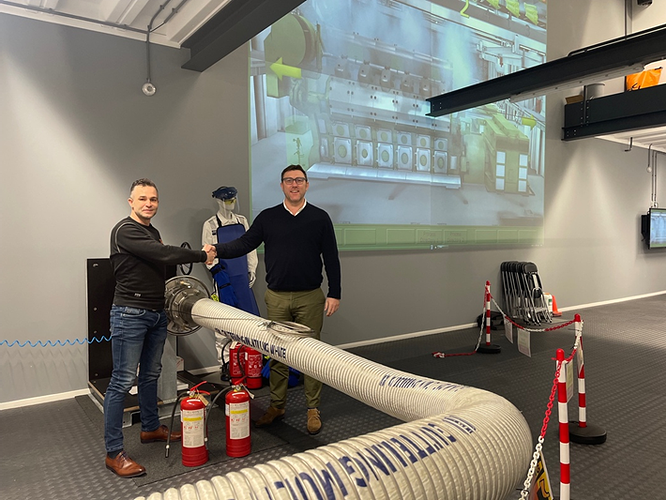 Simwave and React Academy announces to jointly invest in new standards of training on board ships with a focus on new and existing hazards, which includes explosive lithium-ion batteries on vessels amongst other new world safety challenges....

I agree a good start
But how do they suggest fighting an EV Li ion fire on a Ro-ro ?
Love to know.

Yes they do. Here is their ferry fleet:

Seven ships belong to our TT-Line fleet. Come on board and start your vacation in a relaxing atmosphere on board our Sweden ferries.

Your safety on board is our highest priority. Which route and which type of ship you choose: All TT-Line ships comply with the very latest safety regulations and have sufficient life-saving equipment. All safety-relevant procedures and processes are defined in TT-Line’s safety management system. This ensures that the requirements of the IMO’s “International Safety Management Code” are met and regularly reviewed. Our competent employees with good training ensure the ship operations.

PS> They also serve Swedish delicacies in the restaurant. Not sure if that includes “surstrømning”:

But how do they suggest fighting an EV Li ion fire on a Ro-ro ?

Here are some ideas:
https://www.seatrade-maritime.com/regulation/mca-issues-safety-guidance-electric-vehicles-ro-ro-ferries

That is rank on on epic level

It deserves it’s own thread !

Some of those should be donated to Ukraine to fire at the Russians
Probably contravene several treaties though.

Cars powered by ice???
Have you invented a new and revolutionary fuel for the future??

no, been around for a while, before that was External Combustion Engines, steam.

I have been getting a few updates from the offshore battery boats, good in cold water in Europe and not so good in warmer waters, lots of arguments between builders, class and owners.
Not to mention increased fuel consumption so charterers complaining.

Ohh so he ment ICE?? Who could have guest?

Yes they are as safe on ferries as they are on on a parking lot, as long as they don’t suddenly burst into flames, which happen from time to time.
In more danger on the road, however. Lots of idiots there!!
Besides, gasoline is highly flammable.

good in cold water in Europe and not so good in warmer waters,

What about warm waters around Europe, or cold water anywhere else?
I presume the effectiveness of cooling system is the issue, to the geographical location.
The same problem existed when older ships built for North Sea trade where transferred to tropical waters.

Not to mention increased fuel consumption so charterers complaining.

That is opposite of the intended purpose. Any verifiable reference??

Hybrid OSV is what I was talking about.
One operator was telling me has moved a few from cool water and found out the battery performance drop off dramatically as the cooling systems are not up to it hence cant operate like they claim.

Its one of those technologies where manufactures are dead keen to push it and punters dead keen to buy it and its all invented as its installed, class left in the dust trying to keep up…nothing new.

Hybrid OSV is what I was talking about.
One operator was telling me has moved a few from cool water and found out the battery performance drop off dramatically as the cooling systems are not up to it hence cant operate like they claim.

It is well known that car batteries are less effective in very cold temperatures and in very hot temperatures. They could be dangerous if overheated.

Since battery hybrid OSVs are regularly moving from Arctic to Tropical conditions one would assume that the cooling system was dimensioned and designed to be operationally safe and capable of maintaining the batteries at optimal temperature in a wide range of climates.
I have not be able to find anything saying otherwise.

Here is quotes from an article from 2020:
https://www.seatrade-maritime.com/technology/energy-storage-solutions-are-future-suppliers-must-do-more

Safe design, as well as proper maintenance, means better performance – and a longer service life before replacement.
Using a fully optimised cooling system can aid efficiency to such a degree that an ESS can operate at an average continuous rate of 300%. This means that a 1MWh system can be met with a 333kWh battery; meaning a smaller, lighter, lower cost and easier to install system. It also means that systems degrade slower, and less redundancy must be built in.

A truly effective cooling system must cool the whole of the cells uniformly. When designed as part of the system from inception, water cooling can deliver uniform temperature control and remove “hot spots” on the cells. These hot spots will degrade the cells, and over time will cause premature failure.

Liquid cooling systems designed in this way are also able to stop thermal runaway before it starts. By ensuring that a cell is operating in optimal conditions at all times, it also improves performance and lifespan, but even in the case of a damaged cell failing, the cooling system will be able to remove more energy than is produced, keeping adjacent cells cool. The battery avoids the chain reaction of thermal runaway and stays within operational parameters.

Some systems today are designed as add-ons that only cool the exterior of the cell or use air cooling technology – which requires 3,500 times more air flow volume to achieve the same heat removal, and require expensive add-on HVAC systems.

Its in nobody’s interest to read about OSV PSV AHTS that are engineering F***ups so you never see it on the internet.
There have been colossal design cock-ups in the past and plenty with new electronics.
If its public then you cant get on hire.

Some examples of boats I have been on;
Somebody designed several large DE PSV with 4 main gen sets…and…
no standby so when at the dock one huge gen set running all the time
The DP bridge so badly designed the crew used binoculars to read the position screens mounted on the aft cabin top above the windows.
one DP console on each desk. Boat should have never been allowed to leave the dock.
Mast so poorly designed it had major shadowed sectors of both DGPS antennas

Smart thruster controls must be one of the, most dangerous systems on modern vessels.
Class have no clue what they are classifying
If it was my decision it would be just install the thrusters and all control from the DP company.

teslars when they catch fire the FD shows up put the fire out, the fire restarts on its own usually in the wrecking yard after they have been towed in. Teslar is aware of this. there have been cases where teslar shows up on scene apparently, they have a tracking system built into their cars.

wal mart put them up on the roof some of their buildings along with solar panels as emergency back up systems, they have caught fire also. cant figure out with there track record why they still push the technology when there ARE better electric storage systems developed and in progress
must be politics and business as usual. sacrificing a few people for this Technolgy is SOP in the USA

Nothing specific about a Tesla, its just battery technology and the dangerous chemicals in them that create oxygen during combustion

good to know. how do you dispose of them once they have reached their life expectancy?

Its in nobody’s interest to read about OSV PSV AHTS that are engineering F***ups so you never see it on the internet.

I have been been around and doing inspection on all kinds of offshore vessels for over 40 years Thus I have seen my share of design faults, wrong installation and wrong use of equipment, both mechanical and electronic.

That doesn’t mean that you should stop inventing and testing out new things. Some may prove to be “less than perfect” to put it politely, but (with some improvement) may become “industry standard” over time.

I remember an AHTS were the Owner had invested in the latest and best of bridge equipment, incl. “Captain’s Chairs” with operating controls built into the armrests.
The problem was that the chair with the winch control had been placed Fwrd.: 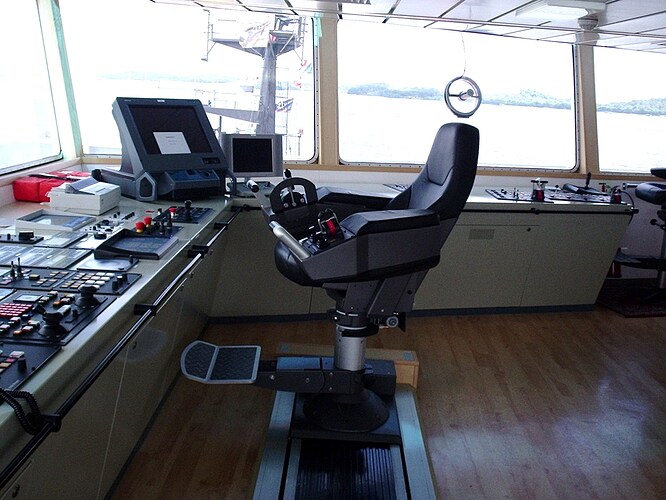 The docking consoles on either side of the bridge had no clear view as the bridge wings did not extend to the shipside: 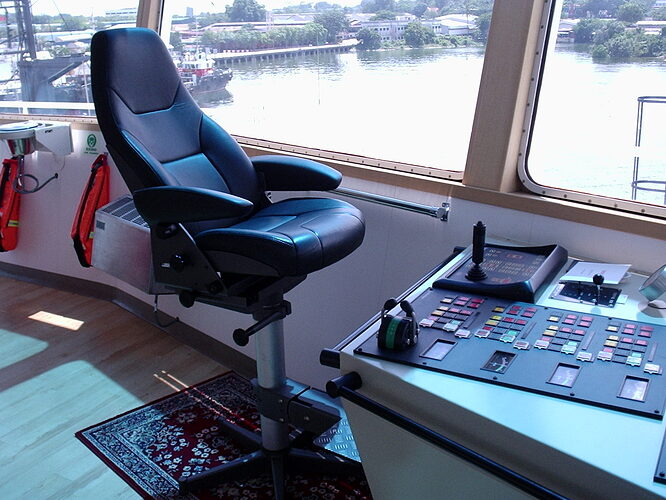 On the aft consoles the winch controls were place aftermost and the maneuver controls Fwrd. thus the winch operator (usually the Ch.Eng.) blocked the view astern for the Captain when doing Anchor Handling: 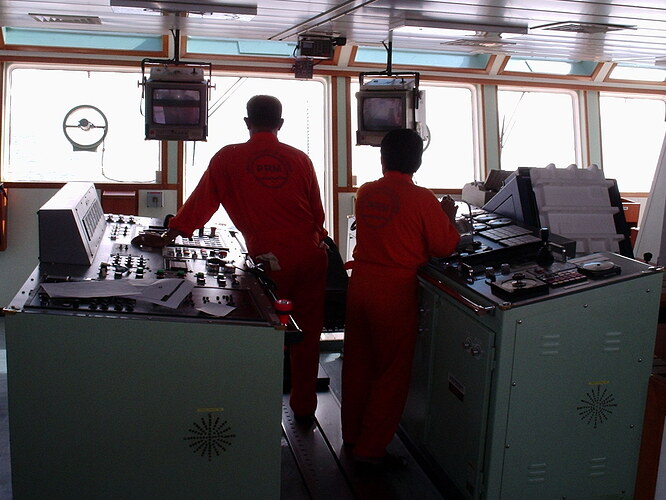 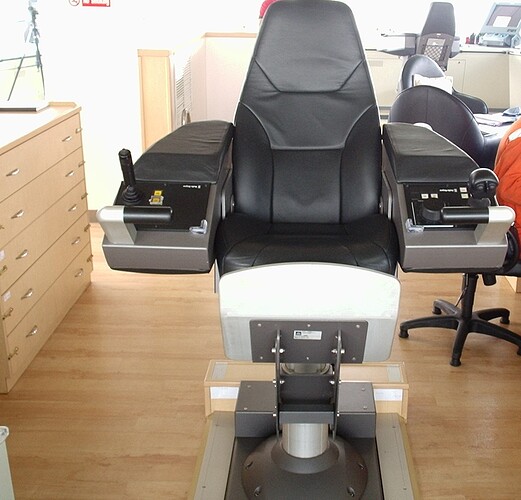 PS> To make it worse, the Ch.Eng. was among the biggest of Pinoys, while the Captain was rather small in stature. He would sometimes placed the portable Joystick on the window frame so he could get a better view of the deck and surroundings.