image752×545 78.9 KB
Saturday 10th April 2021 the BOKA VANGUARD, loaded with the ARGOS floating production unit, sailed through the La Quinta channel at Ingleside, TX, USA. She was supported by four SIGNET tugs and safely moored at the KOS bulkhead.

More on the Argos transport and arrival at Ingleside: 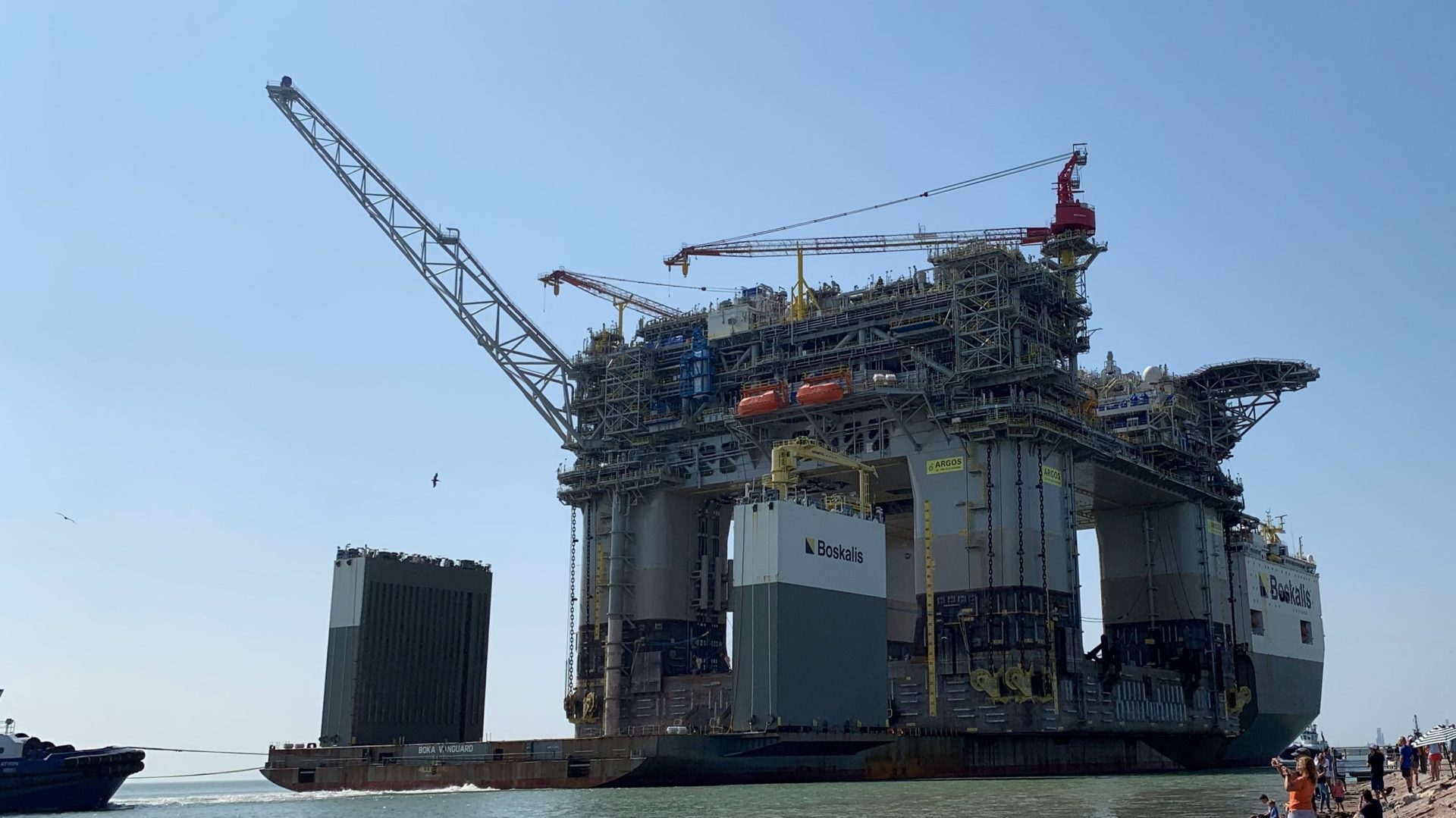 Argos, the centrepiece of BP’s Mad Dog 2 project, has arrived in the U.S.  after  completing its 16,000-mile journey from South Korea to Texas.

Photo top : Sjoerd Blomsma – Solis Marine Consultants ©
The BBC PLATA arrived in Jurong Port in Singapore loaded with straddle carriers to load additional 2 Damen Shipyard-Singapore built FCS 3307 Patrol for transportation to South Africa
The FCS 3307 Patrol is constructed from Aluminum and is having a length of 34.2 mtr and having a max speed of 30 knots:

Vessel ENOUGH TALK is a Heavy Load Carrier, Registered in Finland. Discover the vessel's particulars, including capacity, machinery, photos and ownership. Get the details of the current Voyage of ENOUGH TALK including Position, Port Calls,...

She is carrying wind turbine parts from Vestas in Esbjerg that will be installed on “Haramsfjellet”:

She will not be required to get up there as a wharf has been constructed just for the purpose of bringing in the equipment to build the wind park.

PS> But there MAY be some protestors waiting for her on arrival:

Enough Talk seen on her way along the west coast of Norway:

The “welcoming committee” will be waiting for her at Haramsøya.

Record-breaking module on its way to Norway

On 7 April, two years after the first cut for the construction, the giant MSF module for the Johan Sverdrup P2 platform left Aibel’s yard in Thailand, and is now heading for Norway.

Continuation. Discharge and transport up to Haramsfjellet:

Travelling over night to avoid road traffic congestion the new Suurhofbrug left the fabrication yard quayside of Hollandia Infra in Krimpen aan den IJssel bound for the A15 crossing of the Hartelkanaal near Oostvoorne where it will provide relief for...

The 2018 built SGP Flag fast ferries MAJESTIC FAITH and MAJESTIC WISDOM being discharged from the MPP ANGUS at Magazine Wharf, Grand Harbour, Malta for the Gozo Fast Ferries, Malta on Friday 14th May, 2021. They are renamed to YOUR FAITH and YOUR WISDOM homeported at Valletta, Malta (MLT Flag).
Photo: Capt. Lawrence Dalli - www.maltashipphotos.com (c)

image751×293 21.5 KB
The lead tow boat MAERSK LANCER assisted by Forth Ports harbour tugs delivered MAERSK GALLANT to GPO SAPPHIRE where she was safely loaded onboard at Burntisland, Firth of Forth on 28th May 2021.

image751×433 59.7 KB
The 170 ton, $55 million Konecranes #38, known to local residents as “The Big Blue Crane” departed Manitowoc, Wisconsin on Sunday morning, May 31st. It is being towed by the tugs SARAH DANN on the bow and MANITOU on the stern. The journey to the U.S. Navy Shipyard in Portsmouth, Maine is expected to take three and a half weeks. It will be towed through three Great Lakes, the Welland Canal and the St. Lawrence Seaway before reaching to its’ Atlantic coast shipyard destination. It is seen here in the St Clair River. Photo : Bert Varady Michigan, USA ©
dbeierl June 3, 2021, 4:16pm #53

to the U.S. Navy Shipyard in Portsmouth, Maine is

It’s the Portsmouth New Hampshire Ship Yard but it’s actually located in Kittery Maine (on Seavey Island on the Maine side of the river). Every so many years New Hampshire gets mad and tries to annex it – so far without success.

Last weekend the brandnew Guangzhou Shipyard International Co Ltd - Guangzhou GD under Yard/hull No.: 19121011 built 48.000 DWT XIANG AN KOU arrived off Ulsan (Korea) from the builders in Nansha to load the King’s Quay Floating Production System this FPS hull has been underway at Hyundai Heavy Industries’ Ulsan facility in South Korea since July 2019. Scheduled for commissioning in the first half of 2022, the King’s Quay FPS will be capable of processing up to 80,000 barrels of oil and up to 100 million cubic feet (Mcf) of gas a day. It will be tied-back with three deep-water fields in the Green Canyon area, namely Khaleesi, Mormont and Samurai. The oil and gas processed at the King’s Quay FPS will be transported onshore through a subsea pipeline network operated by Genesis Energy, a midstream oil and gas company based in Houston, Texas.
Murphy Oil and its partners entered into an agreement with Genesis Energy to provide downstream transportation services for the entire crude and natural gas output of the King’s Quay FPS in December 2019.The crude oil will be sent either to the Cameron Highway Oil Pipeline System (CHOPS) or the Poseidon Oil Pipeline System, though Genesis Energy’s
Shenzi lateral pipeline.CHOPS has reception stations at Texas City and Port Arthur in Texas, while the Poseidon pipeline drains oil at Houma in Louisiana.The natural gas from the King’s Quay FPS will be sent through the Anaconda Gathering System to the Nautilus gas pipeline system which is connected to the Neptune natural gas processing plant in south Louisiana. Hyundai Heavy Industries was awarded the King’s Quay FPS construction contract in October 2018. Exmar Offshore, a subsidiary of Exmar Group, is providing engineering and construction supervision services for the King’s Quay FPS project. Audubon Companies received a contract to provide detailed design, engineering, and construction as well as procurement services for the top sides of the King’s Quay FPS in October 2019. COSCO SHIPPING’s XIANG AN KOU is transporting the hull of the King’s Quay FPS from South Korea to the Gulf of Mexico under a contract signed with Hyundai Heavy Industries in July 2019. GATE Energy was contracted by Murphy Oil to provide commissioning services for the King’s Quay FPS project in August 2019.

image747×415 44.4 KB
At transit draft. Ready to proceed to Gulf of Mexico for installation at the King’s Quay Field.

image751×324 24.7 KB
This giant hydraulic cylinder, one of the largest worldwide, has been recently loaded onboard an inland water vessel in Lohr am Main/Germany, only few hundred meters up the road from where it has been built by Hunger Hydraulik, for the transport via the Main- and Rhine River to the sea port of Antwerp from where the journey will continue by seagoing vessel to Shanghai/China. The cylinder is designated for an Offshore project

The dredger “HUSSEIN TANTAWI” arrived in the Suez Canal, loaded on the semi submersible vessel “TAI AN KOU”, in preparation for joining the authority’s fleet in preparation for the celebration of the flag-raising ceremony on it.The dredger " HUSSEIN TANTAWI " has advanced specifications, with a total length of 147.4 meters, a width of 23 meters, a draft of 5.5 meters, and a productivity of 3,600 cubic meters of sand / hour along a floating ejection line of 4 km, and a total capacity of 9,190 kilowatts:

image722×429 35.4 KB
OHT’s HAWK loaded the L/B JILL in Rotterdam Calandcanal Photo : Willem Holtkamp ©
L/B Jill is heading home to Houma, Tx.
Is her career in the Offshore Wind industry over and her charter with Fred Olsen Windcarrier over??
1 Like
← previous page next page →