There are sheltered waterways to the south of Batam, which are designated as layup areas. 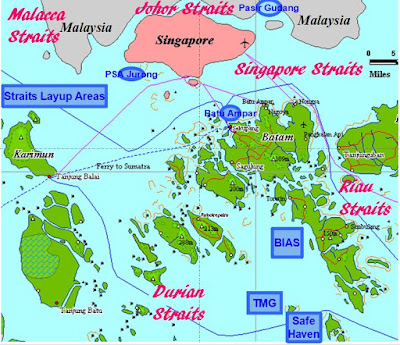 The area labelled BIAS has mostly north-south currents , while the two areas labelled TMG and SafeHaven have a wild mix of unpredictable north-south and east-west currents.

The whole area is quite sheltered, except for occasional tropical squalls which can momentarily reach 35 knots.

In the current mooring practice, a single anchor (sometimes piggy-backed) is used, meaning that each ship weathervanes freely around it’s anchor.

I would like to propose that we use a fore-aft north-south two anchor pattern, primarily to:
1] prevent the anchor cables of different ships getting tangled up (it has happened twice).
2] provide a backup, in case one anchor system completely fails.

There are dozens of vessels in this area, which can be laid up for months or years.

The BIAS zone experiences it’s strongest winds at this time of the year, from the south, reaching up to 20m/s (40knots). The two southern zones are also exposed to winds (though not especially big waves) from the NE Monsoon between November and March.

Is long term fore-aft mooring a good idea? What are the drawbacks? I prepared the initial Layup Procedure for this area.
If you want to know more, send me a PM.