Here we go again!! Another knee-jerk reaction by my company (tug/barge company that moves oil). We now have in place a policy where when I’m steering through a restricted waterway/pilotage waters such as NY Harbor, The East River, or up the North River with a 450 ft barge drawing 30 ft, I have to record a plot a fix every 10 minutes.

Here’s my dilemma. The upper house has a chart table the size of my 3rd grade class desk which is facing aft, I’m running thru the East River for the Gate with a bunch of traffic, and its 2130 at night. How in the sam hell I am gonna take my hands off the NFU lever and plot a stooooopid fix on the chart without either hitting another vessel or being piled up on the rocks??? Oh, I can wake the Mate up and utilize Bridge Resource Management.

The individual that mandated this policy use to steer our boats (not very well by the way) and now he is above the VGM level and somehow he thinks this is gonna promote safety. This is why we have have recency/pilotage for these routes we transit, we know our position, have VRM’s set up a critical points/areas to keep the vessel in the safe water, and there is a chart plotter recording the position every minute that is utilized as an aid to navigation.

If I tried to follow this ridiculous policy with the rest of the fleet, we would cease to exist as a company, bcuz all the equipment would be tore up from the floor up. This dumb shit just pisses me off!!! I’m sure some of you Unlimited ship guys will chime in and put your 72 cents in - I welcome a solution from anyone that can offer a solution with only 2 guys in the wheelhouse.

Will they accept time abeam or between aids to navigation? Keeps us legal in the bell book on the deep sea side.

Is the knee-jerk reaction the 10 minute interval or that you have to plot at all? Ten minutes seems a little tight. Where I work, company policy is to never exceed 15 minutes between plotted fixes in confined waters (pilotage areas). Plenty of bridges and other prominent landmarks in the East River and the rest of that area - just mark the time on them as you pass by underneath/abeam. I’m sure you can turn around for 5 seconds to do that.

I agree with you that I’ve always felt that paper plots (in conjunction with ECDIS/ECS and radar) in pilotage waters, especially when buoy hopping on multiple ranges, are mostly worthless. It’s not enhancing safe navigation - it’s taking someone’s attention away from what’s actually going on, especially on a tug/one man wheelhouse. Maintaining a paper plot offshore is much more critical. If you lose all electronics, you’ll be glad to have something to DR off of.

Create a GPS waypoint with the touch of a finger every 10 minutes and transcribe position to paper chart later.

As far as on the chart deep-sea ships the shortest fix interval requirement I’ve seen is 15 minutes. On the river it’s just going to be a mark abeam and a time on the chart, it’s not practical to use bearings and ranges.

A bell book is also kept where the times passing abeam prominent landmarks is kept, a few of which would be transferred to the deck log at a convenient time.

Good point!! We’ll have to ask the office for guidance on that. I have routinely done this in the past to simplify recording and plotting a position when transiting in pilot waters.

I know during the external audits, a lot of the auditors are ship guys and they like to see the actual position logged and plotted on the chart. They HAVE asked to see a chart from a recent voyage and see if a fix was put on the chart or eraser marks from the chart being scrubbed. And, if there is no evidence of a fix having been plotted, that’s annotated as a observation and now you have to do even more paperwork.

eraser marks from the chart being scrubbed.

They HAVE asked to see a chart from a recent voyage and see if a fix was put on the chart or eraser marks from the chart being scrubbed.

Subjective at best whether a chart has been recently erased, but yes, expecting an audit you should make sure all the ducks are in a row. In general practice, a record of the passage showing times passing aids to navigation is enough to do the job in most cases

Do you have ECDIS or a chart plotter, in conjunction with radar? Would a photo with a timestamp, taken of one of your screens work, when passing abeam of a landmark or aid to navigation, versus a paper chart plot? May sound crazy but it would allow you or the other person in your wheelhouse more time to be looking out the forward windows instead of turned around and making a fix on a chart.

Get another person in the wheelhouse and charge OT. . the policy will change. . .

Maybe I am out of touch as I am coming from the passenger ship world where we have a lot of technology, but if you have an approved ECDIS why would you ever need to plot a position on a paper chart? If you don’t have an approved ECDIS, tell the company to get one so paper plotting becomes a thing of the past and you are free to pilot the vessel.

Yes, we have a chart plotter in the lower and upper wheelhouse and both are set up to record a position every minute. GOOD idea though, every ten minutes I can take a picture of the lat/long and record it the log book later. But here’s the caveat, company policy says “no personal cell phones on watch.” Of course, we all know how that works.

The vessel is a tug which is not a SOLAS tug so no ECDIS is required.

Absolutely! Definitely have done that before in preparation of an audit.

By chart plotter you mean a ENC on a computer I assume?

The Lat/long might not be what they are looking for. Deep-sea with a pilot the pilot is using local knowledge of landmarks and so forth to navigate. To reduce the risk of a Cota / Cosco Busan type situation where the pilot steers the ship into a bridge the mate on watch is also required to maintain awareness of the ship’s position. That’s where on the river the requirement to mark on the chart when abeam (or passing under a bridge) come from.

In your case you are the pilot so presumably what they are looking for is a method to cross-check ( To cross-check is defined as to verify or confirm something using alternative sources of information). Because the ENC is using sat data from the GPS a lat/long from the same GPS is not a good cross-check.

Using radar or visual for a quick distance off is a better cross-check. Marking the chart requires that the correct chart be out on the chart table and that the navigator isn’t hypnotized by the display. It also leave a record that can be checked by auditors or the on-coming watch.

Here’s how how I’ve seen it done on ships:
The "abeam: symbol drawn on the chart with the time that the buoy was passed. 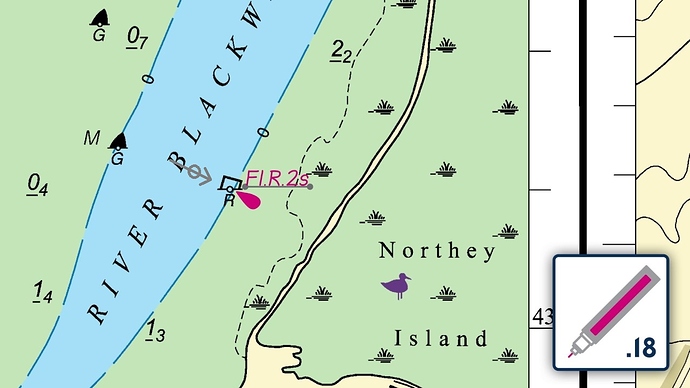 Something so simple and these people holding down the furniture in the office dream up the most idiotic things.

Yes sir, Ive done that as well on the chart and in the log book - I like it, but some auditor about 10-15 years ago gave us an observation on that. I tried to employ the best blend and tact to express my disagreement with him, but he was dead-set against it.

I think your assessment of the situation is correct. I don’t see anyway you can do better then just mark abeam, I can’t think of anything at least given your situation.

Situations like this are why it’s good to have a written procedure. I don’t know what the best move would be in your case but what I’ve done in similar situations (impossible ship security requirements) is just keep taking hits on the audits till the company figured out they had to change the requirements.

In my case it wan’t just me, all the company ships were getting hit on the same requirement so the company figured it out after a while.

You can always write a corrective action request and put the ball back in their court. Time consuming but once you’re on the record the office must take some action if it’s an SMS worth any salt.