During a longshoremen strike in the 1970s an Indonesian flag ship was held back in New York for several weeks.
The Master was a 60-something years old Norwegian who had been member of a Socialist (not Communist) organization as a teenager. He was not allowed ashore and was guarded 24/7.

He was not allowed to visit his brother (who lived in Long Island) even though he offered to pay for the guards to go with him.

The crew change debacle is still a major problem for shipping and seafarers worldwide. It is even deepening according to this article in Lloyd’s List:
https://lloydslist.maritimeintelligence.informa.com/LL1133667/Crew-change-crisis-deepens-amid-bureaucracy-logistics-and-cost

But Singapore is doing something to improve their image as a shipping hub:

From tomorrow Singapore will finally address its crew change commitments, deploying three floatels as dedicated crew facilitation centres at its port. One floatel will house signing on crew and two others will be used for seafarers signing off. In a...

The maritime non-profit Hong Kong Registered Crew Assist Ltd is introducing a Health Pass for Seafarers to try to alleviate the crew change problem caused by Covid-19 restrictions around the world:

SICPA, in partnership with CREW ASSIST, announced a solution to facilitate sustainable and resilient maritime crew exchange in the midst of a pandemic.

Will this be accepted by skeptical Port and Health Authorities?

We are the Plague Rats of the world.

By “We” I presume you mean the seafarers of the world?
There are still hundreds of thousands of seafarers treated like “Plague Rats” that is stuck on their ships for months without shore leave, or any possibility of getting home to their families at the end of their contract.

Abt. 5000 of those are American CIVMARs:

The frustration comes from the disparate treatment, mariners say. As federal workers, they’re confined to ships while military personnel are not under the same order.

No, Ombugge. In my reply to tengineer, I was referring to Americans (as he was). Our “coveted” passport is now generally worthless, because we as a nation decided to treat the virus like the sniffles.

That story ran a few days ago. It is almost identical responses to the subject discussed on this site a while back. Virginian Pilot was way late on their reporting an important subject that impacts the large amount of civmars in the area. That outfit has gone way down since the downsizing after Chicago Tribune owners group took over.

This pandemic could cause the worst shipping crisis in this century and cause grave problem for the world’s supply chain:

Covid lockdowns could bring world shipping to a halt: expert

Seafarers are feeling the pain, not only in shipping but in the fishing fleet as well: 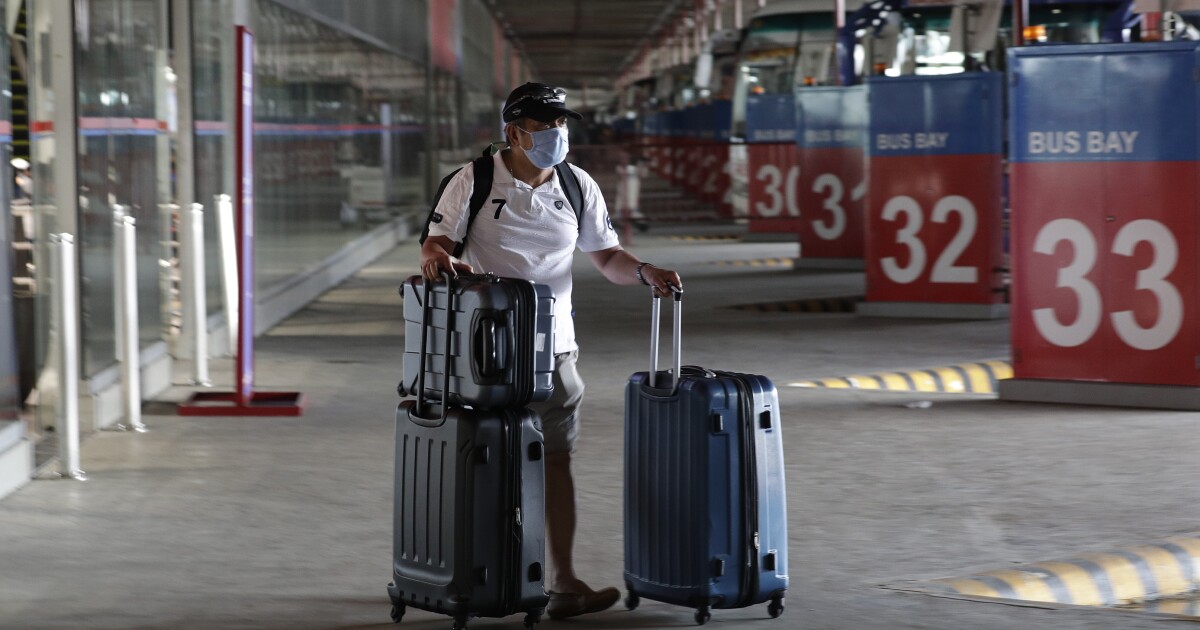 Philippine fishermen stranded at sea by pandemic: 'We think about jumping...

Up to 300,000 Philippine fishermen are unable to return to land due to COVID-19 restrictions and could soon be abandoned by bankrupt boat owners.

Shipping’s leaders say shadowy status is fuelling crew crisis
By : Richard Clayton, Lloyd’s List
MARITIME leaders have expressed their frustration with national governments, accusing politicians of creating a humanitarian crisis due to a failure to meet their obligations on seafarer repatriation.

Speaking on an International Chamber of Shipping webinar, Knut Ørbeck-Nilssen, head of Maritime at DNV GL, conveyed his disappointment at politicians and their “lack of accountability”.ICS secretary-general Guy Platten compared the experience of trying to move politicians on the issue to “banging your head against a wall”. Guy Ryder, director-general of the International Labour Organization, said he recognised how closely shipping representatives had been working together but lamented their lack of progress. He believed the complexity of the situation within governments had got in the way of a resolution to the crewing crisis. “Maritime ministries understand but other [ministries] do not.” The problem, said Gerardo Borromeo, chief executive of Philippine Transmarine Carriers, was that the crewing crisis was global but had come up against local considerations. “Seafarers are normally considered heroes [in the Philippines]; now seen as pandemic carriers.” However, Hugo de Stoop, head of the tanker operator Euronav, saw a different cause. “At the heart of the problem is the way we have built this industry in the past. We have tried to live in the shadows, tried to be discreet, tried to be forgotten. Nobody wanted to pay tax, nobody wanted to be heavily regulated. We have chosen tiny jurisdictions like Panama, Bahamas, Marshall Islands. “What influence do they have on a worldwide problem? None,” he said. In Mr de Stoop’s view, the unprecedented level of co-operation among shipping organisations since the outbreak of Covid-19 had been a reaction to the crisis. In reality, shipping remains as fragmented as ever. “Only the big players have come forward to solve the crisis. That does not represent a lot of people. We need to bring small players in the same direction.” Many family companies have stayed in the background, he said. The result is that people only hear bad things about shipping – such as an oil spill in Mauritius or a cruise ship sinking in Italy. To correct this perception, we need to be willing to talk about the industry much more than we have done in the past. Not just because there is a crisis.” The panel agreed on the urgency to underline the designation of seafarers as key workers, and to allow them to move around the world safely and securely. “People see seafarers disembarking from a ship as a threat,” said Mr de Stoop, “but they have been in quarantine for more than 15 days, so they are clean of any virus. The problem is only those seafarers embarking not disembarking.” The lesson to be taken away is that the industry must prepare for the next black swan event. “We can’t wait for the next 99-year event,” said Mr Borromeo. “We must use the technology, review the processes, and think now about other potential disasters.” Mr Ryder concluded that it was clear both the shipowners and seafarers wanted to tackle the crew change issue and have worked alongside one another. But governments have not responded. “They [governments] will divest themselves of international obligations for reasons of popular opinion. We should apply a little bit of heat to non-responsive governments,” he said. “We should form coalitions of the willing: get together those governments that are willing to meet international obligations.” Source : Lloydslist

Interesting read, thx for sharing . Seafarers are key and essential workers. We know that, too bad the general public doesn’t recognize them as such.


Small step towards solving a big problem that affect not only seafarers but their families as well. (Millions of people)
ombugge September 18, 2020, 10:47am #156

A Singapore shipping company take an initiative to improve living quarter standard on their ship to improve wellness and mental health of their crews:

With many crews now at sea for more than a year thanks to coronavirus travel restrictions and the sterile environment of most accommodation blocks adding to declining mental wellbeing one shipowner has decided to buck the trend and actually invest to...

PS> Eastern Pacific is a major player in shipping, with a fleet of 14 Mill. DWT under management and 5000 employees:

The shipping industry's choice for safe and efficient transportation.

15 years ago the largest circulation Newspaper stopped publishing shipping news after more than 100 years. 55 years ago we had a shipping company with almost 70 ships trading Pacific wide and today it doesn’t exist and it’s passing didn’t gain a mention in the previously mentioned newspaper. The days of public interest in shipping stopped when they could no longer wander along the wharves at weekends and look at the ships. Now they want the ports moved out of sight and out of mind and they don’t care who owns the ships or how they are manned until there is oil on the beach.
Perhaps the complete paralysis of worldwide logistics would be a good thing, I’m right for beer, food and wine and there isn’t a great deal else that I can’t do without.

Not ALL shipping companies are just hard nosed capitalist apparently:

Philippine crewmember hospitalized in US Virgin Islands returns home to Manila via charter jet to continue his recovery.

UPDATE:
Maersk were even first to reduce the planned GRI:
https://theloadstar.com/maersk-first-to-cancel-gri-and-cut-transpacific-rates-as-china-wades-in/#:~:text=News%20%2F%20Maersk%20first%20to%20cancel,rates%20as%20China%20wades%20in&text=Maersk%20has%20reportedly%20reduced%20its,freight%20rates%20on%20the%20trade.
Good news for US X-mas shoppers.

Internet access has become an important part of life for everybody, incl. seafarers:

Thousand of seafarers stuck on ships with no internet

THOUSANDS of seafarers visiting New Zealand are stranded on their ships due to the 28-day quarantine restrictions in the Covid-19, reports the New Zealand branch of the London-based Mission to Seafarers

Congratulation!!! Today it is “World Maritime Day”.
Uppermost in most seafarer’s minds on this day is, not surprisingly, the Crew Change debacle that is still ongoing 6 months into the Covid-19 pandemic:

On World Maritime Day, calls grow to detain ships in order to stop the...

An influential group of unions has called for ships to be detained in ports if seafarers have been onboard longer than international treaties allow. Marking World Maritime Day today, the Nautilus Federation of 22 maritime unions said seafarers are...

Meanwhile China is gradually opening up for more crew changes to take place there:

China to gradually open up ports for crew changes - Splash247

China is going to open up a number of ports soon for ship crew changes as the country eases entry restrictions for foreign nationals. China’s Ministry of Foreign Affairs and the National Immigration Administration announced yesterday that...

And MPA Singapore gets their Accommodation vessel operating as a “halfway house” for crews that is crew changing in Singapore:
https://www.rivieramm.com/news-content-hub/news-content-hub/mpa-resumes-safe-crew-changes-on-accommodation-vessel-60975#:~:text=In%20June%2C%20the%20accommodation%20vessel,change%20vessel%20by%20the%20MPA.&text=Through%20the%20establishment%20of%20a,while%20minimising%20public%20health%20risk.


They are appealing for seafarers to be recognized as key workers.to facilitate crew changes to take place.
← previous page next page →