Why doesn't our Navy have ships with weapons like this!

I mean, this is a WARSHIP! 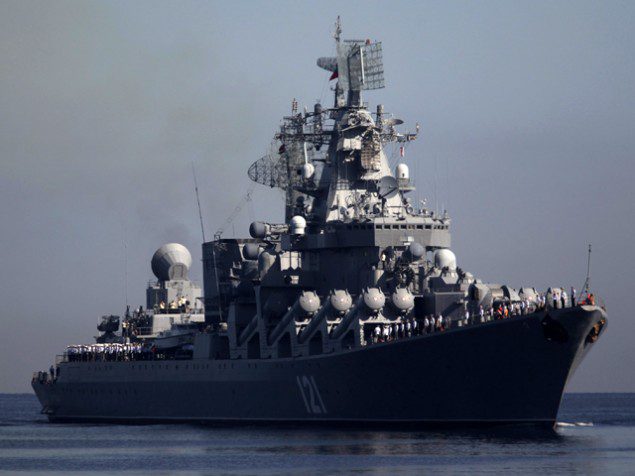 A fleet of Russian warships entered the Port of Havana today, including the guided missile cruiser Moskva, pictured above, the destroyer Vice-Admiral Kulakov and support tankers.

The Moskva is the flagship of Russia’s Black Sea Fleet.

According to the Cuban News Agency, the ships will stop in Havana for provisions before departing for Nicaragua on 7 August.

The 11,490 ton Moskva was built in 1979 at the Kommunara Shipbuilding Plant in Nikolayev, a Ukrainian port on the northern Black Sea. She is powered by 4 gas turbine engines which generate a total of 121,000 horsepower across two shafts.

Moskva carries 16 SS-N-12 Sandbox anti-ship missiles which can deliver a 1000 kg conventional warhead up to 380 nautical miles at Mach 2.5.

Naaaa… nothing a MK-48 ADCAP couldn’t handle. … all these fancy names for these various ships. …we called them all one thing. … TARGETS

Because they spent all our money on these things … http://patriotacts.com/littoral-boondoggle

[QUOTE=Steamer;116573]Because they spent all our money on these things … http://patriotacts.com/littoral-boondoggle[/QUOTE]

Teddy Roosevelt built the great white fleet and famously said “Walk softly and carry a big stick”… but it seems like our current military policy is to yell loudly and carry pea shooters.

[QUOTE=Hawespiper;116539]Naaaa… nothing a MK-48 ADCAP couldn’t handle. … all these fancy names for these various ships. …we called them all one thing. … TARGETS[/QUOTE]

You mean one of these:

whether the Russkie ships are worth a shit of not, they certainly look much more deadly than any of today’s US Navee tinpots.

Ah, for the day of an all gun heavy cruiser like the USS SALEM! Those were real honest warships bristling with real naval ordinance! Fucking missiles took all the romance out of being a surface warfare sailor.

To quote a famous maritime minstrel…

“The cannons don’t thunder…there’s nothing to plunder”

Thirty year old technology and no way to reload is not impressive if u know what u r looking at. A polished turd is a polished turd.

And they are building more: 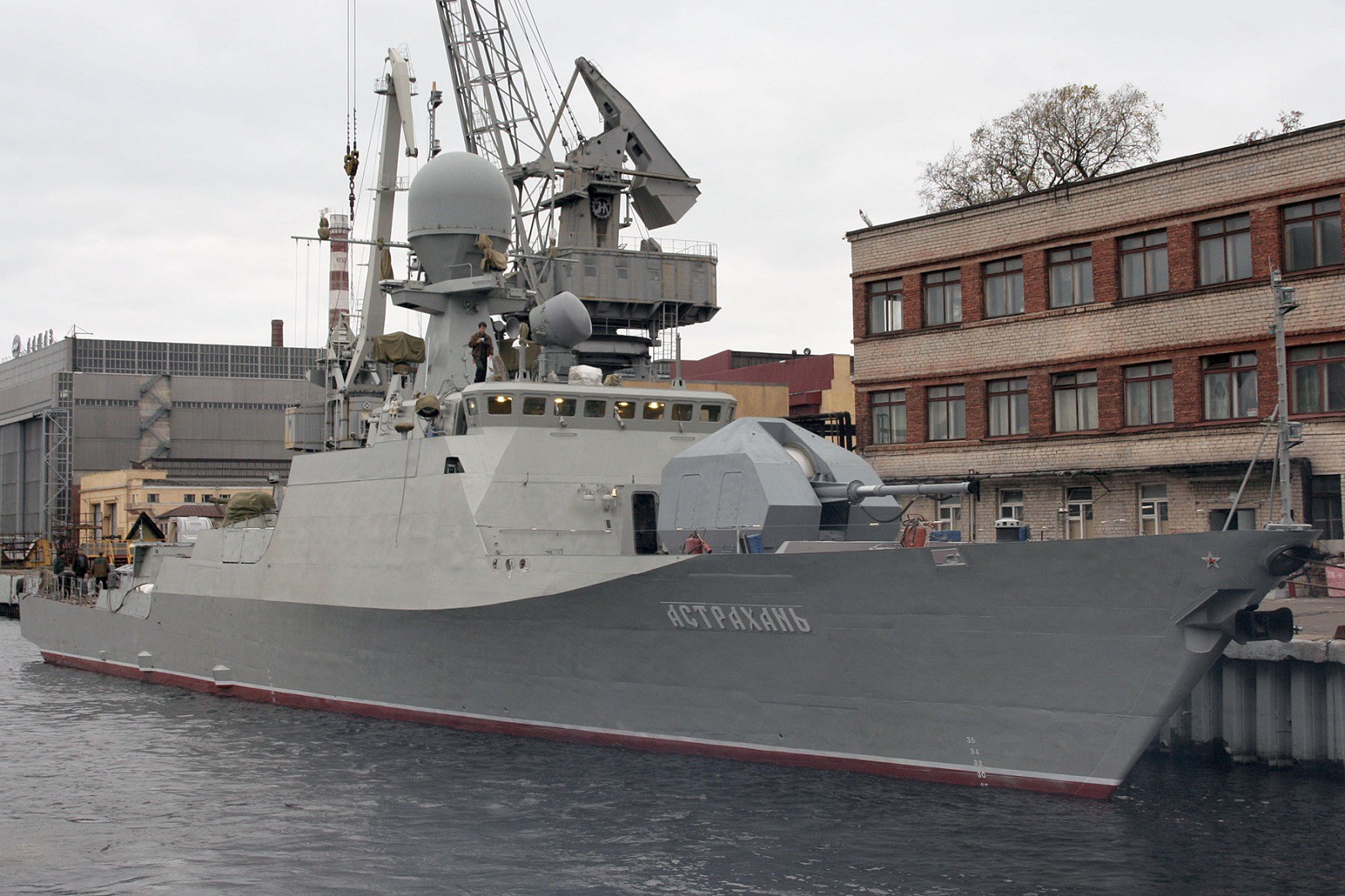 buyan_class_21631.jpg1600×1066
A new missile boat will start sea trials with Russia’s Caspian Flotilla in late August, the Southern Military District said Friday. The Uglich is the second Project 21631 missile corvette. The first, the Grad Sviyazhsk, is already in final state tests. Both ships are due to join the flotilla after completing all trials and state tests before the end of the year, the district’s press service said. The new corvette’s crew is to be made up of contract servicemen, the service added.
The corvette has a displacement of 949 tons and a maximum speed of 25 knots. It is armed with Kalibr (SS-N-27) anti- ship missiles, 100-mm and 30-mm guns, as well as Igla-1M air defense missiles. In addition to the Grad Sviyazhsk and the Uglich, the Caspian Flotilla will also take delivery of a Grachonok-class patrol boat, several Serna-class landing craft, and three tugboats in the near future, the strategic command’s press service said in March. Source : RIA novosti

[QUOTE=c.captain;116587]whether the Russkie ships are worth a shit of not, they certainly look much more deadly than any of today’s US Navee tinpots.[/QUOTE]

While I am LOATHE to agree with ANY of yer potshots at my NAVY; in this you are correct. The Soviets/Russians knew EXACTLY what they were doing they designed these things KNOWING they’d be standing offshore to be seen by locals. The battle is HALF over at least if you’ve dominated opinion without firing a shot. My first ship was USS MAHAN (DDG42) and SHE had lines. SHE was something to behold at anchor. Not quite sure why we lost sight that concept.

The first time I saw the USS Chicago CG-11, I was driving a navy pick-up truck (3 on the tree) on a mail run. She was so impressive that I parked to scope her out for a few minutes.

Rendered honors on my '50s era minesweeper to USS New Jersey in Persian Gulf. Port to Port and just a few hundred yards off. The best visual definition of sea power above the surface.

Thirty year old technology and no way to reload is not impressive if u know what u r looking at. A polished turd is a polished turd.

And can we reload a VLS at sea yet? Sounds like 30 year old technology that can’t be reloaded too.

When you have 96 to 120 cells of various missiles, I’d call it a pretty good setup. Better than the box launchers. Before Reagans 600 ship Navy, the Russian plan of attack was to launch large number of missiles at each target to overwhelm a ships defense capabilities. With more ships (targets) and the advent of CIWS and AEGIS, that strategy was made obsolete. But, as all the bubbleheads know, all skimmers are just targets.

IMHO, fiercest looking, most beautiful ship ever built for US Navy

IMHO, fiercest looking, most beautiful ship ever built for US Navy

^^^^
Pretty sharp warship. Good example of how the camo breaks up the outline.

IMHO, fiercest looking, most beautiful ship ever built for US Navy[/QUOTE]

Not knocking any of the ships from the old time all gun Navy, but the USS ALASKA and the GUAM were really a very bizzare class of warship. What was their true purpose? To small to take on a BB but uber overkill as a cruiser! You are certainly correct about the lines tho…

The truly amazing thing for me is how this Nation built so many warships and merchant vessels in a mere four years! Can you imagine all the yards around the country working flat out like that and not building crappy through away vessels either but ships which easily lasted for 50 years!

Quite a few of those WWII era ships still around too, if you know where to look! Amazing how they still keep going after 60+ years!

About the Alaska’s, I’m sure you’ve read in the history books how the Navy had intel of a new class of Japanese “battlecruiser” type vessel in development, and how the Alaska was meant to counter it. That always seemed to be not the whole story to me. Seemed like someone’s pet project. As it was, they got in the fight way too late to make much difference. Might have been a good thing. US cruisers didn’t fare well against their contemporaries torpedo attacks.

If you want to re visit the Salem. She is tied up in Quincy Ma. But I don’t think she will last there much longer. I don’t think she brings in the tourists and they don’t appear to want to spend the money to keep her up.

I once visited the office’s of a small non-profit org. On the dry erase board in the back office was a listing of all the non-profit historic vessels that were in bankruptcy, or very close to it. Think they had it there as motivation to their staff not to join the list.

If you want to re visit the Salem. She is tied up in Quincy Ma. But I don’t think she will last there much longer. I don’t think she brings in the tourists and they don’t appear to want to spend the money to keep her up.

I see the same fate with the carrier and sub in charleston. I read the sub is slated to be a reef because its in such bad shape. There are some ships that are in excellent condition, BB North Carolina, BB Massachussets, Jeremiah O’Brien are a few that seem to have good support. Remember the WWII carrier Cabot that New Orleans tried to turn into museum? That was a disaster.