From Wikipedia, re: Minsk Agreements:

“The agreement failed to stop fighting,[5] and was thus followed with a revised and updated agreement, Minsk II , which was signed on 12 February 2015.[6] This agreement consisted of a package of measures, including a ceasefire, withdrawal of heavy weapons from the front line, release of prisoners of war, constitutional reform in Ukraine granting self-government to certain areas of Donbas and restoring control of the state border to the Ukrainian government. While fighting subsided following the agreement’s signing, it never ended completely, and the agreement’s provisions were never fully implemented.”

The Minsk agreement, which is quite short to read, was nothing but a ceasefire agreement. No mention of rebuilding. No cash payments. Not that I expect Russia to pay anything.

It never ended the fighting because the Ukrainian government kept shelling in the Donbas.

Be careful what You wish for.

An interesting comment from another " Russian" spy and/or “troll” who defies notorious warmongers.

Here are full original texts of Minsk I,II agreements for all to read and draw their own conclusions not disturbed by warmongering wokemons.

Since the last POTUS speech in the UN i have started drilling " duck and cover" techniques.
Think about it

The Russian peole I know in Russia (Moscow) do not feel an existential threat from the West, but do feel a real threat from Putin.
and they are officers.

An interesting comment from another " Russian" spy and/or “troll” who defies notorious warmongers.

Carlson is not a spy or a troll. He’s a clown, and no reasonable person would take what he says seriously.

Who says so? Tucker Carlson. His lawyers stood up in front of a federal judge in 2020 and said no “reasonable viewer” takes the primetime host seriously. So why are you?

Carlson is a dealer pimping outrage meth to junkies so addicted they don’t care when he tells them they’re crazy. 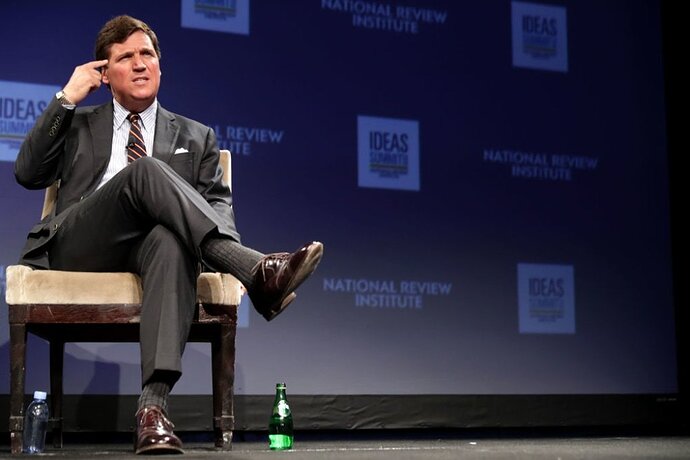 Tucker Carlson has a point.

So far in 24-hours you’ve cited as your experts a clown, a fictional movie hero, and a cyborg. Hopefully, you’re just getting started. Can’t wait for the next one!

Those poor Russians, they didn’t WANT to run around torturing and killing, the Ukrainians made them do it.
This is quintessential wife-beater logic, “Look what you made me do” .

A post was merged into an existing topic: Breakneck LNG Build-Out Shows Germany Can Move Fast