The Dutch were prudent, four tugs, a patrol boat, a police boat and a small passenger boat (with photographers?) awaited the vessel and guided her to the dock. 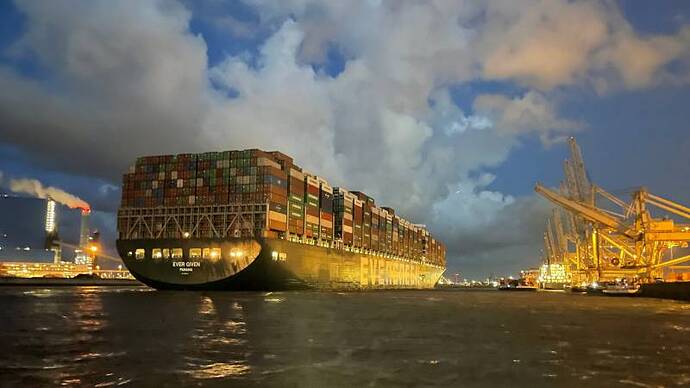 'Dwarsligger' Ever Given komt aan in Rotterdam

First of all I would like to express my sympathy for the situation You have got yourself in. I am not going to give You advise, what to do as this is a lawyer’s job and I am not such.

For starters here is a link to WMU webinar, which landed in my news feed on my FB account and upon watching it i have figured, it may be of some interest to You -especially part III .

Myself and may be other participants of this forum may not agree with all what the panellists have said but generally i think it is the best so far from the legal point of view, what has been aired on the legal issues involving Ever Given -your case included .

Now when you are done let me quote one of the commentators here:
quote:
However, some knowledge of our legal systems suggests, that the reasons for this unilateral decision, to declare a “General Average”, may be challenged by the big and wealthy “losers”.

Some participants may declare me a roving lunatic propagating such an idea but i will tell them " hold your horses" fellas and consider the following :

I find it difficult to understand, why all legal gurus including those in above webinar and those participating in different forums and panels( Splash247 for example) , do not mention that clearly , that G.A. (general average) is not a sacred cow and can be challenged and butchered easily if claimants /challengers can prove unseaworthiness of the vessel .
Of course the burden of proof rests with them to do it but the cases history can show it can be done. Example : CMA CGM Libra case , which is now flying to the Supreme Court as Owners contest Honorable Judge Tiare decision to declare the said vessel was unseaworthy - hence the G.A. test failed miserably .

The reason of Libra unseaworthiness may be shocking to Old Salts here but it was badly prepared , inadequate PASSAGE PLAN , which was in addition badly executed by the ship master. I will skip further details.

Surely Ever Given had to have a Passage PLAN , which surely contained " points of no return" such as Suez anchorage , surely it had to contain master deliberations on the risks his vessel takes given it’s physical dimensions versus dimensions of Suez Canal with or without strong winds , surely it had to contain Under Keel Clearances calculations/deliberations with particular focus on the SQUAT EFFECT , BANK EFFECT and other risks . Surely the vessel had Safety Management System where such procedures were written and should be complied with.

Surely it had to contain info from all available sources on the bridge like B.A NP Pilot books , Guides to port entries, , ships routeing and ocean passages of the world - the WHOLE SHEBANG. And i am damn sure the master should be familiar with SCA Rules of navigation or at least have some rudimentary knowledge of it’s contents regarding not only the transit speed and limits but rules regarding tug assistance when required and how it is arranged.

And if he did not have this knowledge prior transiting this peculiar area where pilots pray during navigation and consume huge amounts of ice cream and read newspapers , then surely there had to be management SMS procedure how to make sure their masters get this knowledge ASAP and document it as per ISM mantra.

I can rattle on and on but i hope others here will join rattling as well and chip in and/or contribute.

One can find the Libra verdict on the web and read the Judge reasoning . Honestly i do not agree with all the arguments and would rather believe the master was incompetent as suggested by an Australian lawyer and Master Mariner in his analyses of the case.

The issue of seaworthiness has been expanded hugely in the last 50-60 years and includes not only technical prowess/condition of the vessel but also competence/skills of master and/or crew, certification, adherence to ISM Code( Solas) , vessel management system , industry advise and many other things as the case history proves.

I have and have read many books on the issue including Gard P & I Guide to Shipmaster - there is a nice chapter on seaworthiness there and in many publications issued by top 10 P& I Clubs this issue was digested quite frequently and made public during the last 20 years.

From all this literature I regret to observe that nowadays, with all this ISM and SMS and all this bureaucratic bullshit , proving unseaworthiness looks like a walk in the park. One needs only skilled lawyers and guys/consultants who know the current systems inside out. Follow the CMA CGM Libra trail.

Need to shut up and split now but honestly if I was in Your shoes I would go for the jugular. I find it interesting that nobody clearly says who is the OWNER as per ISM definition . My gut feeling it is BSM and I know those blokes .They made me master in 1995 on their container ships.
Remember : that class certificates offer to all parties concerned in the adventure including master , the presumption of seaworthiness not a guarantee and the devil is in the details, which are best uncovered by judges and their brethren of maritime advisers/consultants.

If You have any questions You know where to find me. Cheers .

Surely Ever Given had to have a Passage PLAN , which surely contained " points of no return" such as Suez anchorage , surely it had to contain master deliberations on the risks his vessel takes given it’s physical dimensions versus dimensions of Suez Canal with or without strong winds , surely it had to contain Under Keel Clearances calculations/deliberations with particular focus on the SQUAT EFFECT , BANK EFFECT and other risks . Surely the vessel had Safety Management System where such procedures were written and should be complied with.

Sadly, many of the SCA shortcomings during this incident will also be on the Master’s “account” although it is the only recourse that consignees have. A truly unjust state of affairs.

I have just viewed the Webinar and a couple of interesting points;

The two participants briefly referred to the SCA Rules of Navigation regarding “Responsibilities”. I fail to understand why the various legal teams are not dissecting this document to reconcile the SCA’s responsibilities. That may limit shipowner liability and GA liability.

I wonder if there were some stowaways in the TECs on the Ever Given?

Some cargo owners are now talking about using the 30 day rail link between China and Europe having concerns about containerised sea freight.

Not only the Ever Given has been good advertising for the China - NW Europe Rail Link: 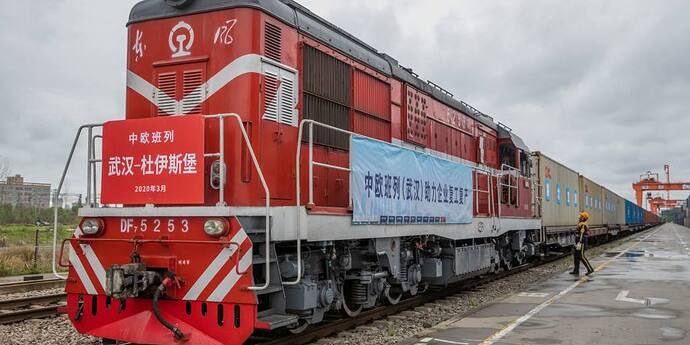 ROTTERDAM - Thursday morning, July 29 at 05.15 am, the Ever Given arrived amid great interest at the quayside of the ECT Delta terminal in the Amazonehaven.
The arrival went according to plan.

All continental containers are unloaded here. Containers for Hamburg will be loaded back onto the Ever Utile this weekend to continue their journey to Hamburg.
The Ever Given is expected to leave for Felixstowe early next week to deliver the remaining containers in the UK.

Aankomst Ever Given verloopt volgens plan

I am happy to see “EVER GIVEN” at Rotterdam after a 3 months delay at Suez due to … a sand storm?

A shit storm sir. With many kinds of turds.

Tuesday, August 3 at 14:30 UTC, ‘Ever Given’ docked at the Felixstowe container port to offload the last containers, bound for England.

Now what’s next? Docking and repairing?

Ever Given captain returns home. 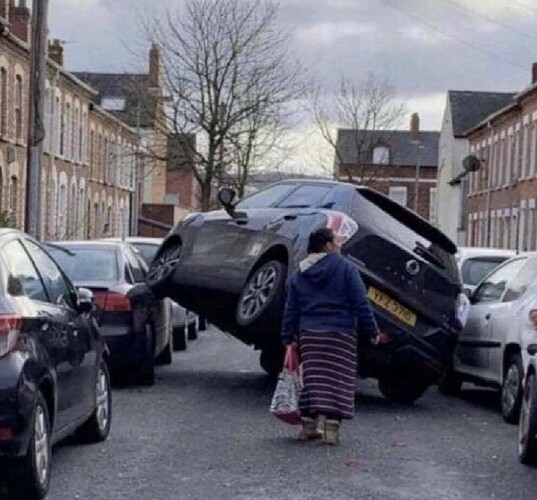 After 36 hours docked at Felixstowe’s container port, ‘Ever Given’ is now anchored off Felixstowe.
On AIS they announced a draught of 10.3 m (max draught = 16 m), this may say that she is on ballast-only.
AIS-destination is the Suez Canal.

Just speculation:
They are going to a free slot at a dry dock, East of Suez.
Dubai’s docks have at least the dimensions needed.

Actually M/S Ever Given is slow steaming outside Portugal for Malta and further orders.

It is wise to send the ship in the direction of Cape Town. Better safe then sorry. 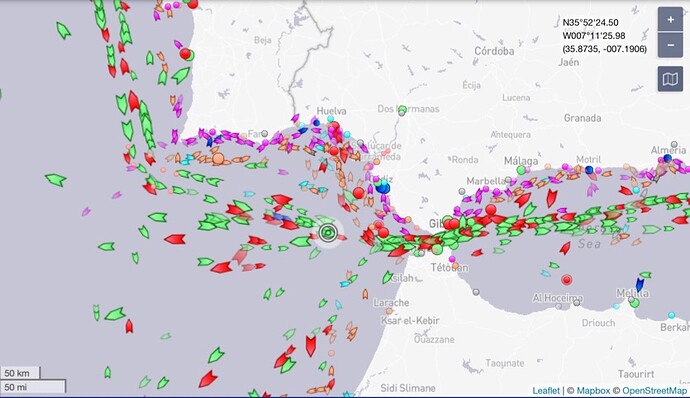 Brave lads. They are going to have another try. This time they are probably getting another kind of reception. It is no go when the weather isn’t perfect, enough tugboats available, sticking to the middle of the road no more banking fun, there best pilots etc. Be prepared and keep the Marlboros in readiness…

There is no dry dock in the Med to handle VLCS Ever Given, so after Valletta/Malta, where will she be ordered? To the PG? Or Singapore? Or a scrapyard ???

Don’t have the specs off-hand but this is a big one. 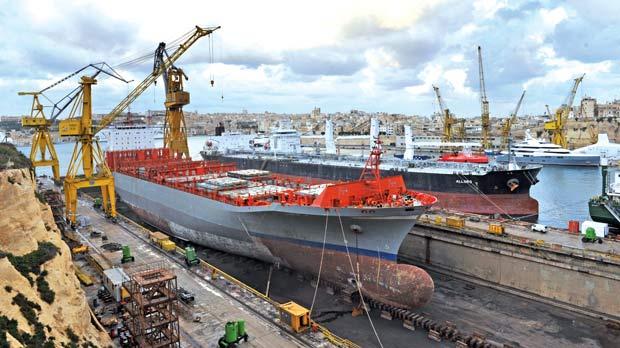 A drydock where sheer size matters

It looks big from across Grand Harbour but the sheer immensity of the shipyard’s Dock Six, below Corradino Hill, only becomes evident when standing at its bottom looking up towards a towering ship. The ship-repair facility, known as Red China dock...

Malta is home to the largest drydock in the Mediterranean. The Red China dock which was built in 1975 by the Chinese government has a capacity of 300,000 tonnes and is more than three times the length of a football pitch.