I’m the owner/dircetor of a small UK-bsaed manufacturere who has about 12 months’ worth of components on the Ever Given and I’m worried sick about this. We’ve managed to keep going through the pandemic by bringing in extra smaller batches of components by air, but if we don’t get this stuff soon we’ll just have to close up. Without the components we simply have no business.

It’s obviously maddening to be the victim of the SCA’s piracy and extortion, but the complete lack of any information and updates on the situation from Evergreen and the other organisations whose business it is to make the shipment is truly galling. I’ve been able to get my information from NewsNow, updating my ‘Ever Given’ search several times a day, but I’m furious that there’s been next to nothing of any help passed on from the shippers.

After getting the news of the release last week and waiting several days before seeing the ship actually moving again, I was horrified to see the Ever Given drop anchor off Port Said (I’d expected it to see it berth as it had been added as a scheduled stop). I can understand the need to check out the vessel following its grounding, but can’t imagine what work there was still to do given that this was supposed to have been done whilst at anchor in the Great Bitter Lake. It can’t possibly be that the three months it was there wasn’t enough time to carry out these checks, so did the SCA prevent this work from being carried out?

Now it’s stopped again, not actually at anchor according to Vessel Finder, but just apparently drifting around of Syracuse with a few slow corrective busts, looking at the recent tracking. …and even the experienced contributors here can’t come up with any plausible reason for why this might be so.

Evergreen will no doubt justify their lack of communication during the seizure as being necessary due to the ongoing negotiations, but now that the ship is free, why the radio silence?

My guess is there may be two problems. One is the weather limits imposed by the temporary seaworthy certificate.

The more thorny problem might be related to this:

According to the spokesperson, this choice is motivated by the fear that affected parties will seize in other ports. When choosing the port of discharge, the shipping company and the insurers are guided by the question of where the least legal complications can be expected. The fact that there are major differences between Dutch and British maritime legislation plays an important role in this.

Perhaps there are negotiations with parties that have the power to seize the ship or further delay delivery of cargo.

That won’t surprise me at all. There are many lawyers chasing this vessel.

Maybe the container transshipment port ‘Tanger Med 2’, on the Moroccan side of the Strait of Gibraltar, could help.
It is outside of the European’s legal system, and the Moroccans (without visible special efforts) could certainly delay any legal action until ‘Ever Given’ is completely discharged.

EG appears to be keeping well clear of territorial waters whilst the legal jousting continues. This summation from Bloomberg……. 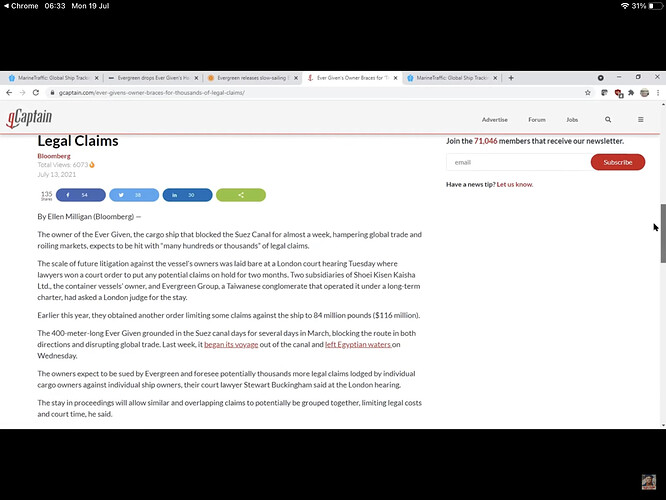 The Hamburg call has been cancelled owing to conditions placed on the vessel and another smaller Evergreen vessel will be used for that transshipment.

A two month stay on further claims has been granted via the London court although nothing is mentioned regarding Rotterdam. Perhaps this might explain why the EG is being held outside all territorial waters until such time as a deal has been stitched up regarding the Rotterdam discharge.

I understand your frustration entirely. These massive issues were further compounded following the 6 day grounding by the EG’s long detention.

12 hours ago, ‘Ever Given’ left the drifting area.
Now underway at 11 knots in the Sicily Strait, direction Western Mediterranean.

Since they left the anchorage off Port Said, they did not change their AIS-destination; it is still Rotterdam on July 25.

Good to see the ‘Ever Grounded’ is under way again.

Thanks for the educated guesswork as to why it was loitering around off Syracuse for several days. Maybe this was the reason for its stay in Port Said, rather than the ‘safety checks’ explanation officially offered?

Now, like all the cargo owners, I’m being asked by the ship owners’ average adjusters, Richards Hogg Lindley, to make a ‘deposit’ payment to the value of 25% of the total value of our goods. This payment is to be made directly to their bank account and they, of course, give no indication of how much of this will be returned, if ever, but do add: “May we therefore urge you to take the necessary actions as quickly as possible in order to avoid further delays.”

Having been held to ransom by the institutional piracy of the SCA, the shipowner now seems to think it’s okay to perpetrate a similarly extortionate action upon the cargo owners without issuing any reassurance that their goods will ever reach their destination.

Do I actually have any options other than to just pay up? Can I, at least, defer this or pass it on to my insurers (don’t think I’m actually covered, but this hasn’t been confirmed by my insurers yet)? 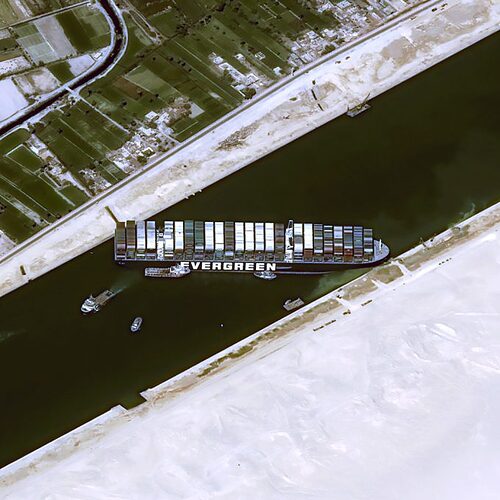 Owner of ‘Ever Given’ declares General Average – Marine insurance matters! – ...

My son is in that business and he says that everyone who has cargo on board of the Ever Given has to pay a deposit because they are afraid they will not receive anything after extradition.

This is standard procedure in these cases.

I’m not a lawyer and I don’t know the details about this ‘averaging’.

However, some knowledge of our legal systems suggests that the reasons for this unilateral decision, to declare a “General Average”, may be challenged by the big and wealthy “losers”.
This would delay any further litigations to the years to come… 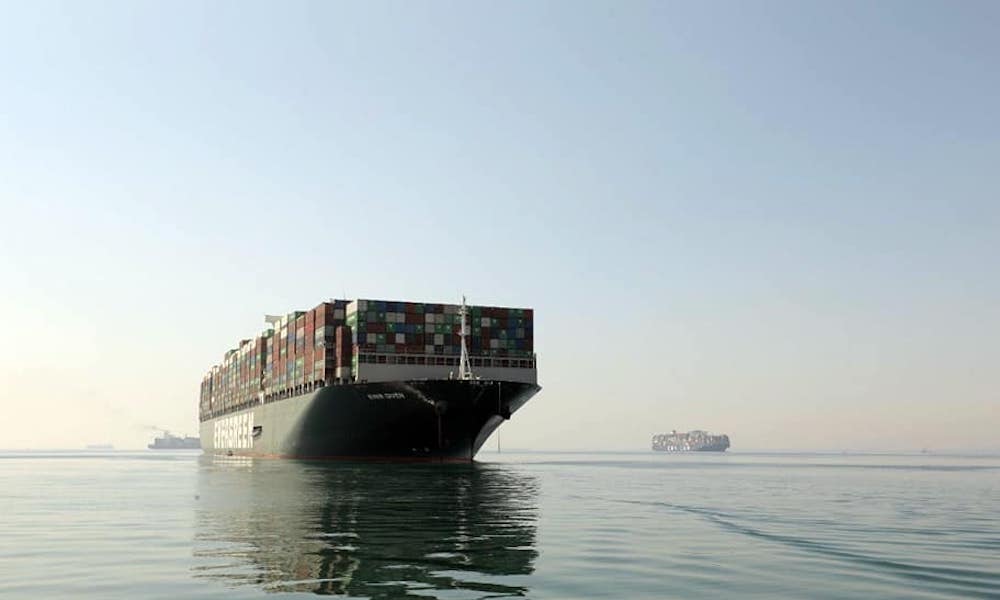 Ever Given will need repairs - Splash247

The , this year’s most famous ship, will need repairs. The Evergreen-operated vessel came to worldwide attention in March when it grounded and blocked the Suez Canal for six days. After a protracted legal fight over compensation between the ship’s... 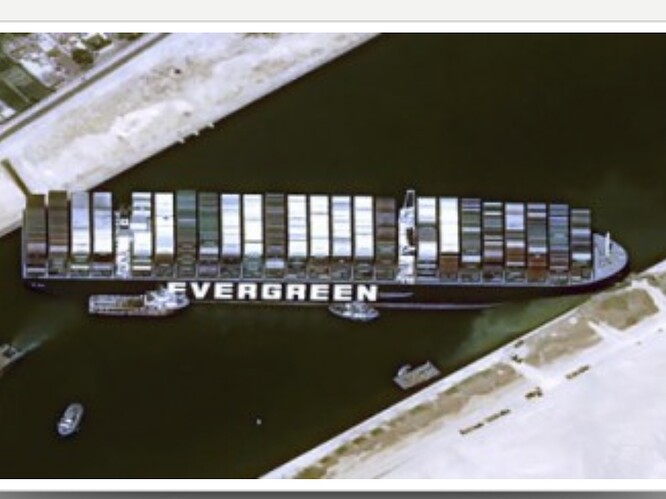 It is hard to look at these two photos and not consider, at a draft of 15.7m, that the rudder and propeller were not very close to/or on the bricks. Perhaps this may explain the cancellation of the Hamburg stopover with the commensurate speed restrictions.

From Maasmond Newsclipping today:
It does not say when and where this picture was taken: 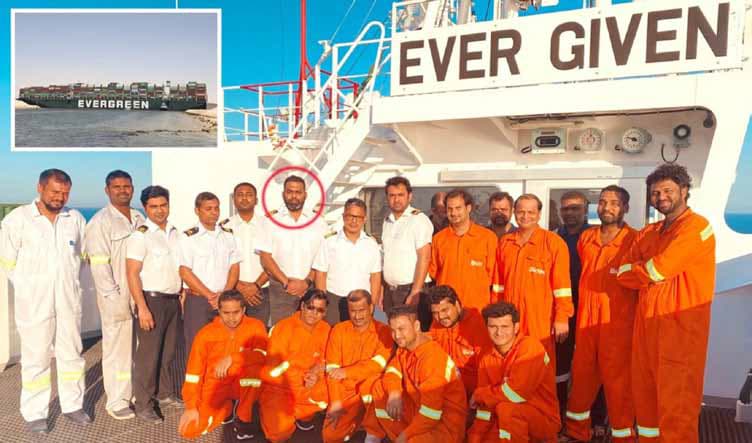 It was on course at normal speed until 09:28 UTC when it slowed right down and has been loitering off the coast of Cherbourg all day. Looks just the same as what happened off the coast of Sicily soon after it left Port Said. It was there for several days before it resumed its journey.

Any ideas what’s going on?

There simply is no place at the terminal, the ship is therefore on hold. Other container ships that have not been delayed have priority over the Ever Given at the ECT Terminal where the container giant will dock. Cargo owners will have to be even more patient when the container ship arrives in Rotterdam on Thursday afternoon. It can take a few days before the Japanese ship is unloaded.

The bulk of the containers will have to be disembarked in Rotterdam, after that the Ever Given only calls at a British port. All containers for the European continent, especially Germany, will therefore also disembark in Rotterdam.

I don’t know if that’s the reason for loitering off Cherbourg or not but that area is a better protected from northerlies.

On her voyage from Gibraltar the weather was fine, she was faster than planned…

Please put this vessel out of her continuing misery.

Good to to see the ‘Ever Grounded’ is on the move again.

Here’s an extract from the official update from Evergreen provided by my forwarder yesterday:

EVER GIVEN’s Estimated Time of Berthing (ETB) at Ports of Discharge 16 July 2021
While EVER GIVEN is en route to her destination ports in Europe, the vessel needs to follow the guidance outlined in its seaworthiness certificate to sail at lower speeds and to call only Rotterdam and Felixstowe. The usual Hamburg port call will be dropped because of concerns surrounding navigation safety. To comply with the safety requirement, the cargoes planned to be discharged in Hamburg will be unloaded in Rotterdam and transshipped to the destination port. Evergreen Line is coordinating with the terminal operators regarding berth arrangements and will maintain close contact with them to ensure the containers can be discharged as soon as possible when the vessel arrives. The ship’s operational schedule is planned as follows: