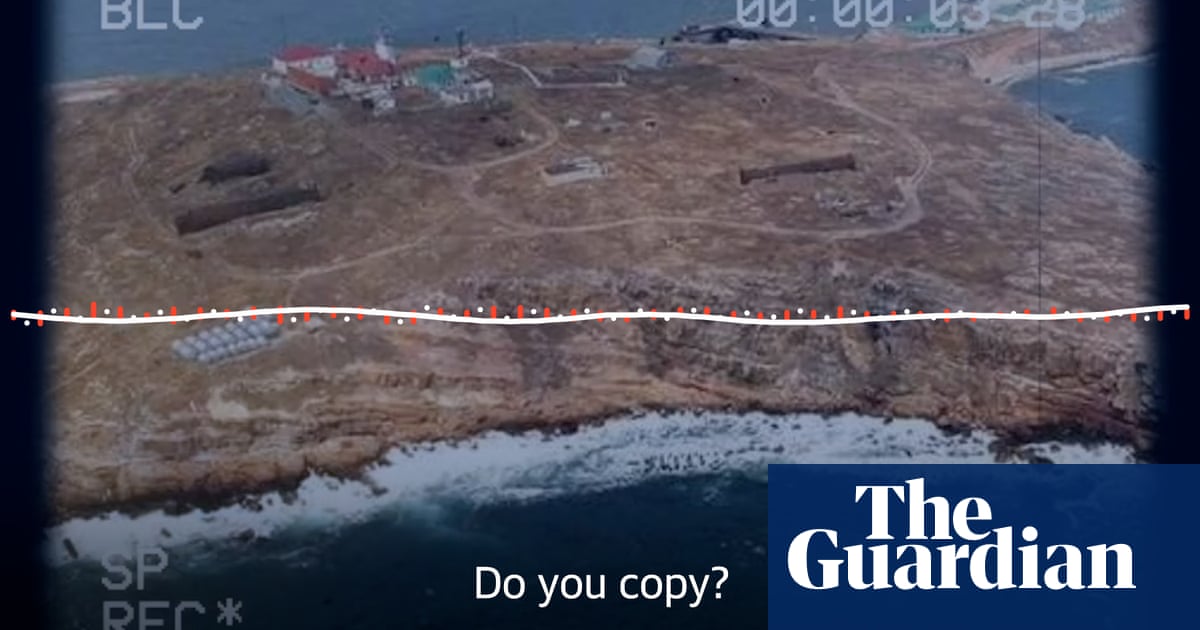 I would not expect anything different. What else do you expect people to do when you are threatening their homes?

I dunno, I think these guys deserve extra credit. They were defending a rock, no family home just a rock that belonged to their country. They could have given the rock up and possibly gone home. This is what Putin is up against.

Michael Bernstam a Fellow at the Hoover Institute suggested this back at the time of the Crimea invasion and has since updated it last week.

To prevent an invasion of Ukraine, threaten to sanction Russia's central bank

Only credible deterrence can prevent Russia’s invasion of Ukraine and a new war in Europe.

If only the White House had the fortitude to listen and act.

If only the White House had the fortitude to listen and act.

All White Houses along with congress for the last 50 years have been owned by the banks so that will not happen.

Making up sanctions is a tough job. For instance there is resistance from Italy over including luxury goods, Belgium over diamonds. Business and profit first. Rightly so. Oligarchs have to be able to purchases these goods without any crazy restrictions at all times come rain or snow.

George F Kennan Op-Ed article contends that expanding NATO would be 'most fateful error of American policy in the entire post-cold-war era;' maintains that such decision would inflame nationalistic, anti-Western and militaristic tendencies in Russian...

I’d be willing to be that China will soon invade Taiwan while all this is going on.

I agree
However Taiwan has ties to the US that Ukraine didn’t have.
I think that Taiwan would get more than sanctions.

I doubt that. The Chinese are the most patient culture on the planet. They’re watching closely and I guarantee they don’t want the fallout that is coming to Putin. Putin has already lost the publicity war regardless of what happens on the ground. I don’t see China sacrificing the well-being of its population by going against the world order.

I’d be willing to be(t) that China will soon invade Taiwan while all this is going on.

How much???
Based on which inside information?

A moment of clarity

The Russian invasion of Ukraine should wake us up.

Few events create as much moral clarity as the unprovoked, brutal invasion of a peaceful nation by a militaristic empire. It’s the backdrop or the driving conflict of so many of our stories — Star Wars , Casablanca , Lord of the Rings , The Sound of Music — precisely because it creates heroes and villains so easily and automatically. On one side, the haughty, iron-fisted dictator with his legions of destruction — on the other side, children hiding underground while their parents make a desperate stand to protect their homeland.

The story of Russia’s invasion of Ukraine fits that archetype perfectly. Ukraine wasn’t threatening Russia in any way; Ukraine never fired a shot into their neighbor, even though that neighbor had already carved off pieces of their country in 2014 and subjected them to a grinding eight-year war. Putin simply declared that Ukraine is historically part of Russia and sent in his troops. Soon, Russian missiles were blasting practically every city in Ukraine, Russian tanks were rolling into Ukrainian cities, and Ukrainian children were huddling in bomb shelters:

Better don’t f*ck with the Ukrainians. Handing out Molotov cocktails works better than handing out rifles. Untrained kids with rifles are no match for the Russian army, they will be slaughtered.

Shit, that’s up close and personal.

Slightly more removed than that:

Message from Zelenski President of Ukraine:

I thank my friend Mr. President of

@RTErdogan and the people of

for their strong support. The ban on the passage of

are extremely important today. The people of

will never forget that!

Message from Zelenski President of Ukraine:

If my memory of history serves me correct, restricting Russian passage of Bosporus and Dardanelles violates the Montreux Convention.

They can restrict them from going out, but not going in. The idea back in the day was they would LEAVE and cause problems elsewhere, now we have the reverse and the treaty didn’t take that into account.

The Montreux Convention Regarding the Regime of the Straits is a 1936 agreement that gives Turkey control over the Bosporus Straits and regulates the transit of naval warships. The Convention guarantees the free passage of civilian vessels in peacetime, and restricts the passage of naval ships not belonging to Black Sea states. The terms of the Convention have been a source of controversy over the years, most notably about the Soviet Union’s access to the Mediterranean Sea.

Russia can certainly defeat Ukraine but control it? Not likely long term. Putin in his wish to restore the states of the former Soviet Union to Russian control may have shot himself in the foot on this one.