Another stealth warship run down

In a VTS area

A lot of people are going to have a lot to answer for. 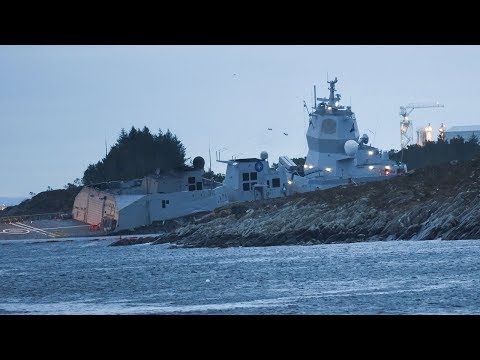 Lots of knock-on effects from this collision. Because Sture Terminal is closed other terminals in the area and pipelines from North Sea fields have to close as well: 
As usual, not very much maritime knowledge behind this report in Norway’s biggest tabloid newspaper.
ombugge November 8, 2018, 11:39am #5

Please not that the position of cameras distort the facts here. She is actually a bit away from shore, but deliberately put onto a shallow spot in a bay.
The area is heavily trafficked by large tankers from Sture and Mongstad oil terminals as well as lots of coastal traffic of smaller vessels and offshore vessels to/from Mongstad and Aagotnes supply bases.

It makes a positive change from the USN getting all the flack.

Initially it looks very similar to the USS John McCain collision in Singapore Strait last year.
(But hopefully not the same reason)

It shows once again that naval navigators are a special breed.

They have a Officer on watch, 4 lookouts, 1 helmsman and a navigator at the bridge of the frigat. And a dude at the VTS whose sole reason for existing is to prevent this.
How the fuck does this happen?

Here is the known facts about the tanker Sola TS:
She was on Equinor charter and a regular at Sture and Mongstad terminal. At time of collisin she had pilot on board and an escort tug attached at the stern:

The costs of this incident is not limited to the damages of the two ships involved and salvage expenses, but the cost of shutting down oil and gas field in the North Sea, at abt. USD 60 mill./day:

The Sture and Kollsnes terminals have started up again, but it will take some time before production and export of gas to UK and Europe is back to normal capacity:

The frigate was running with its AIS off, if Marine Traffic is to be trusted. You can see from the tanker’s track when the collision happens, but the only position report from the Helge Ingstad happens shortly thereafter. They may have operational reasons for running with AIS off, but that should prompt someone to pay extra close attention to collision avoidance when entering the vicinity of vessels restricted by draft. They were coming back from an exercise, so it wouldn’t surprise me if fatigue was somehow involved. We probably won’t see many enlightening details in the media for the time being, but the accident report will be an interesting read when it comes out in a year or two. NRK rather embarrassingly kept referring to Marine Traffic as a radar service, but to his credit the journalist amended his article after I shot him a mail. Here’s some footage:

There’s an AIS animation at the link below.

The bit where the tug tried to push her towards land and she rolled over was a tad upsetting.

Jesus Christ, the reporting in Norwegian newspapers are horrible. How the mighty has fallen. Norway is no longer a maritime nation.

I agree and when you apply Google translate it sometimes become hilarious.

I’m looking forward to the full report on this. It seems unbeleivable that no one on the frigate took any action to avoid the collision (I mean, it’s a tanker most likely lit up like a frikkin chritstmas tree)… I guess if the frigate was running dark, with no AIS and the stealthing was doing its job it might be understandable that the tanker is unable to see her, especially with deck lighting after letting go.

Some hard questions need to be answered regarding this event.