As a young man in the 1960s, I worked in the engine room of a Swedish Freighter, MS Lake Eyre, homeport Goteborg and trading between the U.S., Canada, and Australia. I am trying to reconstruct my recollections of the engine room of that ship or a comparable ship of that era. I believe the Lake Eyre was 8200 tons. My recollection is that she had a six-cylinder heavy oil main engine, and that each of the pistons was approximately 1 meter in diameter. Can anyone help with information about such engines? Here’s a link to a photo of MS Lake Eyre. https://www.alamy.com/english-ms-lake-eyre-at-sea-lake-eyre-was-a-swedish-reefer-ship-built-in-1961-circa-1968-date-qsp1968-00-00t000000z9p1480q5727902-svenska-dagbladet-via-ims-vintage-photos-unknown-photographer-image352435354.html 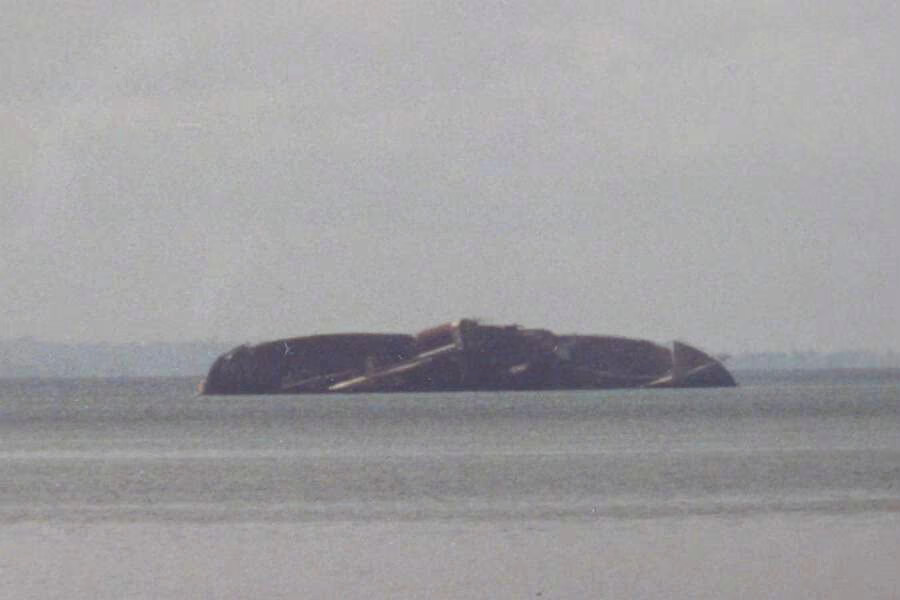 I’ll bet jimn didn’t like seeing that one!, i’d never been aboard that ship and it is hard to see as with any ship but especially one you lived in.

Yvon and JimRR – Thank you for bringing this to my attention; somehow I had missed this. You are right, it is very sad and I feel it deeply. During the year that I worked aboard Swedish freighters and one tanker, I became increasingly aware that ships starting out as sparkling gems in the merchant marine world inevitably reach the end of their useful life, and it is really sad to see them being sold off to companies that don’t always see a need to maintain them as they squeeze every last bit of profit out of their tired old hulls. It leaves me almost breathless. Wow! But thanks, again.
JimN

So, Lake Eyre lasted as such for 14 years from 1961 to 1975, when she was reflagged and renamed Samos Sun and managed to eke out another eight years until her demise in 1983. I worked aboard her from the autumn of 1962 to late January of 1963, when she was a proud and beautifully trim young lady. As an engine room apprentice, I did not make a lot of money (about $100 a month) but at the age of 20, that was way beside the point. The crew was exceptionally well treated, we each had our own private cabin, with every two cabins sharing a semi private head and shower. The food was top rate, there were recreational facilities including movie nights (recent Swedish films like Ingemar Bergman’s ‘Som I En Spegel’ which was the brooding art film ‘Through a Glass Darkly’); a shipboard game room, a library, and even a fully equipped photographic darkroom, which I had more or less to myself! There were real friendships among the multinational crew, and morale was as high as any I have ever experienced on any job. I got the job by hanging out at the Scandinavian Seamen’s Union Center on South Elliot Place in Brooklyn, N.Y., and waiting for an apprentice job ticket to be posted on the bulletin board. After trading up and down the eastern coast of the United States and along the St. Lawrence Seaway in Canada, we passed by Cuba (where we were boarded for inspection by the U.S. Navy during the Cuban missile crisis blockade), proceeded through the Panama Canal and across the Pacific to Australia. We called at Brisbane, Sydney, Melbourne and Adelaide, then back up the coast to Brisbane again, our port of departure, where I “paid off” for a stay in Australia. While we were in Sydney around Christmastime, the Swedish consulate invited seamen of several Swedish ships to a sumptuous holiday dinner party and dance (with local Swedish women!), and arranged for us to participate in an afternoon of haphazard football. I was forgiven for accidentally scoring a goal against my own team, and we had a great time. Real friendships were made among the multinational crew, and the morale was as high as (or higher than) at any work place as I ever had in the decades following. It was an amazing experience that set the course for the rest of my life. Lake Eyre deserved a better fate than was her destiny. Of course, I wonder if any of her crew were lost.

yes, that would describe life lived right!!, My first ship had movie nights, popcorn, shared head and some shared rooms. It built a lot of camaraderie and fostered more of a team atmosphere.
after ships got the internet i think that put a end to it all.