Sjark was hit by a tractor

Sjark was hit by a tractor that drove off the quay: 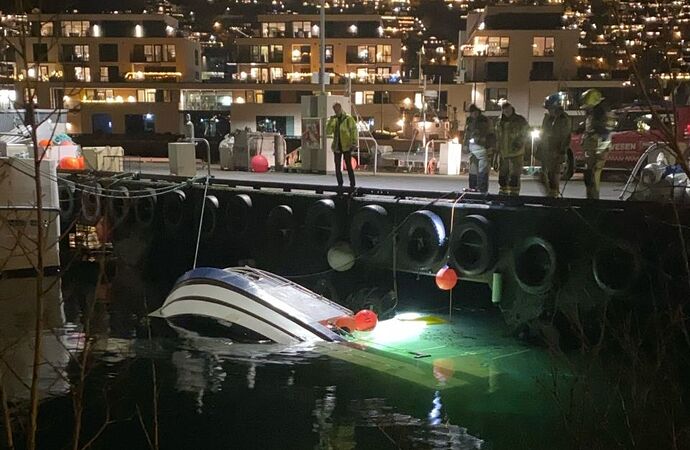 From Ulsteinvik on Tuesday evening.
The police report on Tuesday at 20:35 that a 28-foot boat has sunk at the quay in Ulsteinvik.
“No people in the boat. The emergency services are on the scene,” the police write on Twitter.

PS> “Sjark” is the Norwegian name for small professional fishing boats, usually manned by one or two persons.

Glad he saved his life

Joakim Hofseth Hatløy from Ulsteinvik experienced a nightmare on Tuesday evening. Then he was at the fishing quay in the center to arrange some fishing nets. 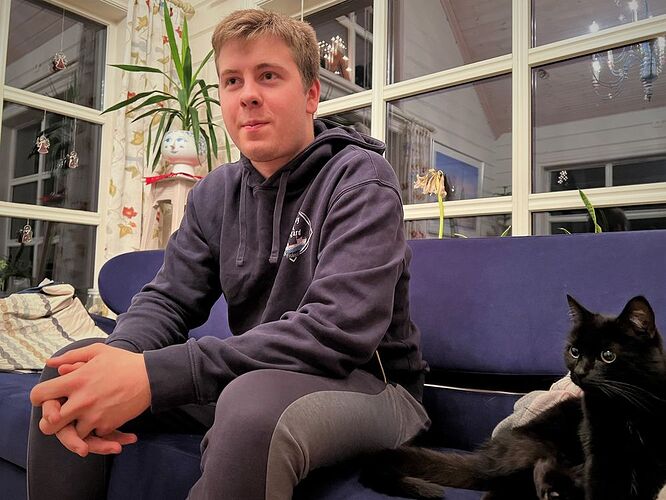 But it is fishing that is the passion. And despite his young age, Joakim is an experienced fisherman. Together with his friend Andreas Utgård, he runs the company Hatløy & Utgård Fiskeri AS, which they founded in July 2021. In August of the same year, they bought the almost eight-metre-long sjarke “Elias”.
Andreas is currently out fishing with the boat “Veidar”, so Joakim was alone with the nets on Tuesday evening. 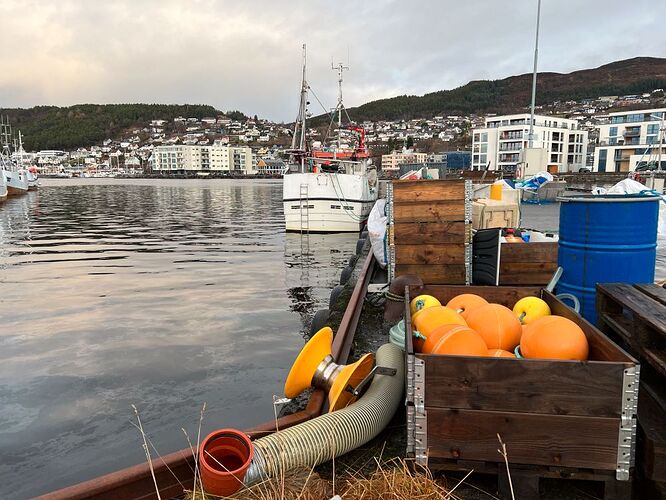 The sjark “Elias” lay off this quay in the center of Ulsteinvik. PHOTO: LINDA EIKREM

It is pure routine: hoisting sacks of net from the shack up onto the quay using the tractor with front loaders. But tonight things go wrong. Joakim already has the lift on land one sack. Again he drives the tractor, his father’s Ford from 1974, onto the quayside.
- I was going to get out of the tractor. Then I felt that it tipped forward. It was unreal, and I thought “This is not very good!”, says Joakim.
For a split second, he thinks that the tractor is going to end up hanging on the edge of the quay with the front supporting the screed. But then the boat gives way.

The nineteen-year-old was wearing boots and a thermal suit, and in pitch darkness he managed to get to the surface. From there, leaden with seawater, he climbs up some car tires that hang down from the quay. 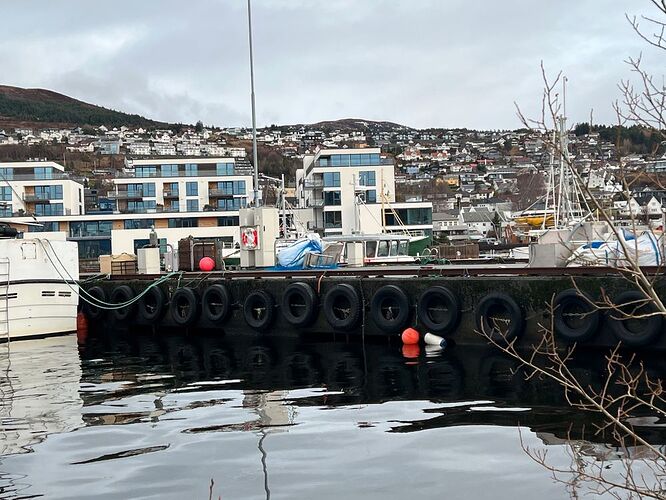 - Everything happened very quickly. I would like to think that it took half a minute from the time the tractor tipped over until I was out of the lake. I had my phone in my pocket, so I called the police on 112 and reported what had happened. Then I called my parents, who were very relieved when they understood that I was still healthy.
The operations center in the Møre og Romsdal police district sent out this message at 20:36 on Tuesday: 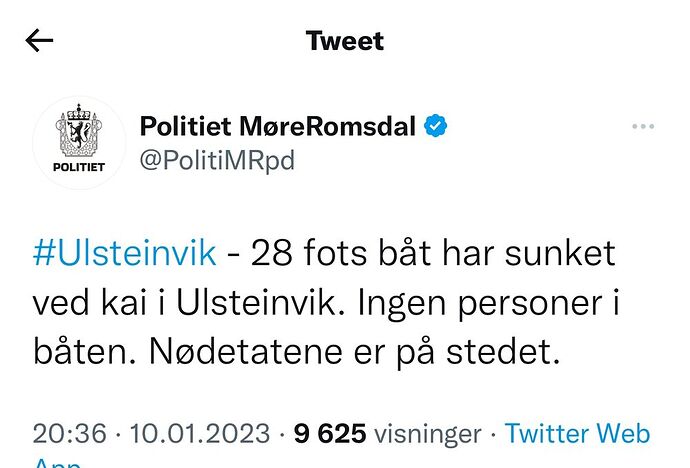 Joakim warmed up inside the ambulance, and he returned home to change into dry clothes during the evening. He is happy that he saved his life, but was also worried about the extent of the damage to the boat and the tractor.
It is five or six meters deep in the place, and the tractor ended up on the bottom right under the boat. The boat was lying on its side, on top of the tractor roof. 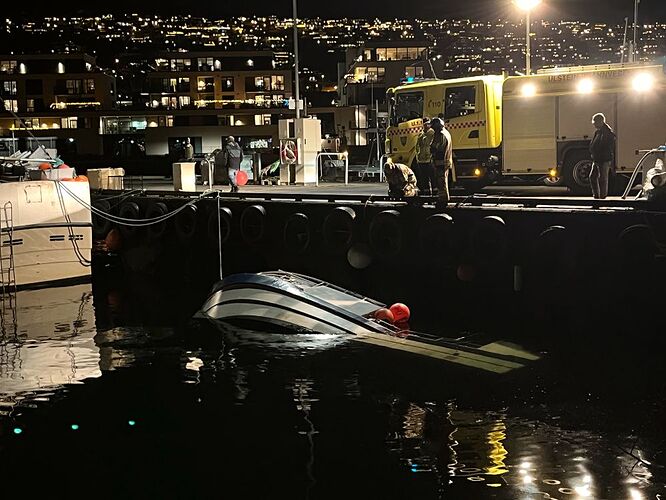 A crane truck from Moldskred Renovation and the rescue boat with divers were called. At 03:00 on the night of Wednesday, the boat was raised to the water surface and later emptied of water, three quarters of an hour later the tractor was raised onto land. Joakim was there the whole time.
All of Wednesday also helped to sort things out. The boat has been sent for condemnation, as it would be too expensive to restore it. Now the incident is an insurance matter.

It is part of the story that Joakim and Andreas intended to sell the boat “Elias” in the near future. On 1 February, they will take over a new and larger boat, the eleven meter long “Safir” from Ålesund. The young owners put a lot of saved equity on the table, in addition to loans, to finance the purchase.
With “Elias” they fished almost forty tonnes of pollock last year, most of it in Voldsfjorden. They deliver the fish to Marine Sales in Stokksund. The catch last year put Joakim and Andreas in fourth place in the catch statistics for all net boats under eight meters in this country, says Joakim.

And Joakim’s plan is to go fishing full-time when he has finished his education, even if the incident at the fishing quay in Ulsteinvik on Tuesday evening upset both him and his parents.
- I didn’t find it very dramatic, but now afterwards I think that it could have been much worse. There were yarns that ended up in the sea, and if I had gotten entangled in them, things could have gone really wrong. And if the tractor had had doors, I probably wouldn’t have been able to get out, says Joakim Hofseth Hatløy.
He wishes to thank the emergency services and emergency personnel so much for their help during the rescue. 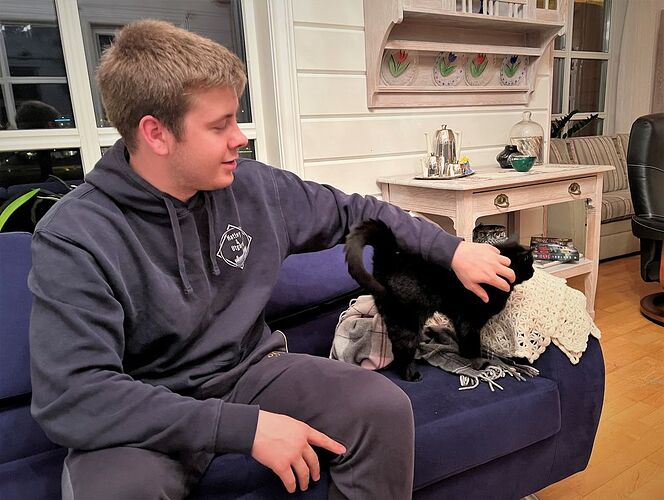 In April last year, Vikebladet Vesposten wrote about Andreas Utgård, who is an apprentice on the fishing boat “Veidar” from Godøya. Utgård was on board the boat when it caught fire outside Lofoten. 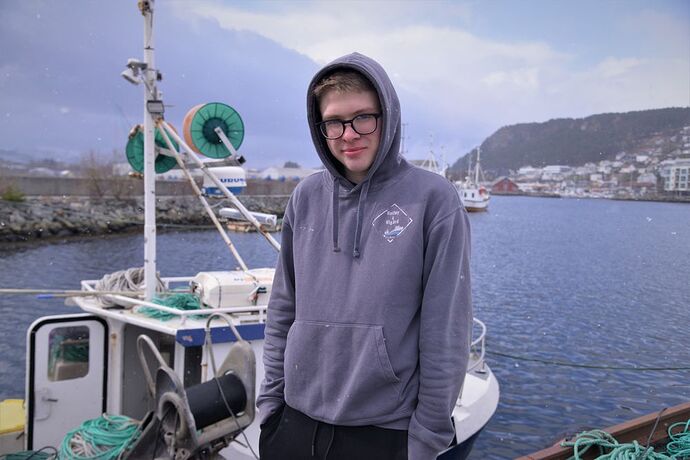 Andreas Utgård is Joakim’s partner. Here he is at the sjark “Elias” in April last year - after he had experienced a fire on board the fishing boat “Veidar”. PHOTO: LINDA EIKREM 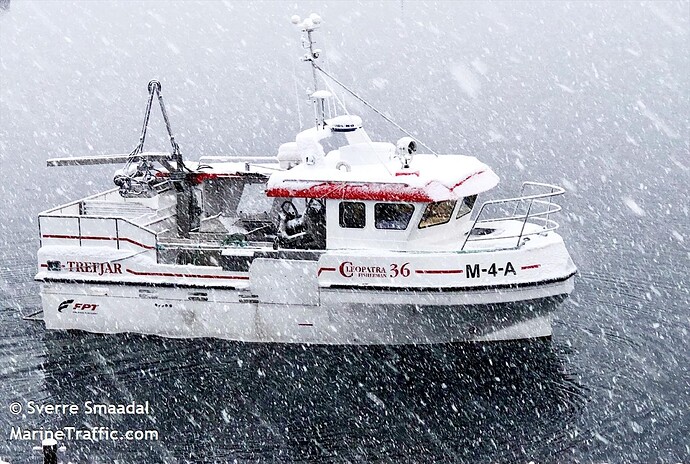 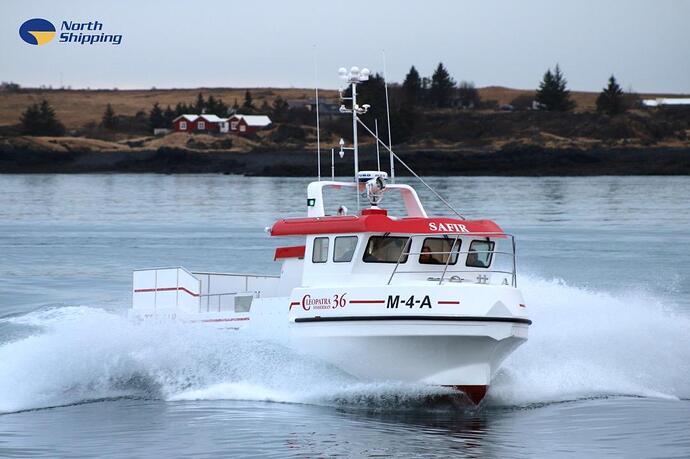