I have been following Fraqrat’s thread on the new builds and it has brought back some good and and not so good memories of all of the Yard Periods that I suffered through during my career.

It always seemed as 90% of the work was completed in the last 10% of the Shipyard Period.

One of my Port Engineers told me that the Company was going to start sending the CE, AE’s and Deck Crew home as soon as the vessel was on the Drydock. They were only going to keep the Captain around. He said that everyone would be brought back for the last 10-20% of the yard period. To say that I was pissed off would be putting out it mildly. I told him that if they did that We would work Our 12 hours that we are getting paid for then leave the boat. He looked at me and said that was not fair. Now this Port Engineer was a good guy and that this was coming coming from big shots in the Ivory Tower.

I told him that the way that we all looked at it was, We all break out butts getting the vessel ready for going on dock, Pumping all the fuel and bilges out. Going through all of the tanks and inspecting them for and repairs required. Helping the Yardbird rigging everything that was coming out of the ER. Basically break our asses off by working 18-20 hours to get everything done so we would be ready to hit the dock on time. There is always a period of time in every yard period that everything slows down and you can relax a little, maybe come in at 0700 instead of 0600 and leave at 1600 instead of 2000. I always figured that this time period was kind of a pay back for all of the hours that we would have to work to get her ready to sail at the end of Yard Period.

My Main problem with being sent home was who was going to be making sure that all of the work was done properly. I laughed when he told me that the Captain would keep a eye on everything. Now I am not knocking all of the Captains here but this guy never even came down to the boat unless Some Big Shot was going to be there.

Not sure if my little talk helped but they sent never us home.

So, let’s here some stories about your Yard Periods, The Good, Bad and the Ugly.

While we were in a Yard in Virginia one time when I noticed a lot of scrap showing up in the bilges. My Company required someone to be at the gangway to keep a head count of how many yardbirds were coming on and off. There was one guy that always made a point to hand his tool box to whoever as counting heads when he came or left over the gangway. The next day I made sure that I was there when he came onboard. Once he handed me this “Heavy” tool box I walked towards the stern with him following me. I opened it up and saw that it was loaded with scrap. Well, the look on his face was priceless and he started babbling. This guy was a good worker so I told him to bring back Every tool that he took and I would keep it between him and me.

Now I have seen a lot of scams while in the yard but I had to give this guy credit for coming up with this as it would have worked if I hadn’t happened to look under the one deck plate that he was using to stash the scrap.

The last drydocking that I was involved with on the ol’ SEA SKIMMER was at an unnamed yard in Jacksonville. It took place when I was off, and the office laid off everyone and left the superintendent in charge. Lovely. When I got back to get it out of the yard, I had to chase down tools, finish the jobs that weren’t done. I didn’t need a list of projects. I found out any time that I tried to operate or starte a piece of machinery or system. It either didn’t work or needed serious tweeking to get things working correctly. Oh, to make up for the tools that were stolen, we went through the night before and snagged some bikes. They came in handy at some of the refineries and tank farms where we were loading to get through quicker than walking. . . . .

That’s not necessarily bad, and is the basis for the concept of “critical path management” that was big when I got my management master’s degree in the late 80s. It was first developed in shipyards. I have no idea if it’s still used or recognized, management concepts and buzz words seem to change with regularity and I have no idea if what I learned is still used.

I hate shipyards. 1st I need the tools. 1st I need you to tag out the motor. 1st can you lock out the pump. 1st, 1st, 1st, wheres the 1st? That being said I cant imagine going home during the period and not having the engine officers on board. Especially when I am watching the shipyard guys washing the economizer down without a blank and seeing water run down into the turbo. WTF??? Man my throat was sore after that period.

Yeah, well I was brought back about 5 days before completion. What a freaking nightmare. Once I came ashore and started with Class, I took a different view of shipyards, but knew how the engineers hated the time. Now I am only in them to look at damage and repairs. I kinda like that. . . 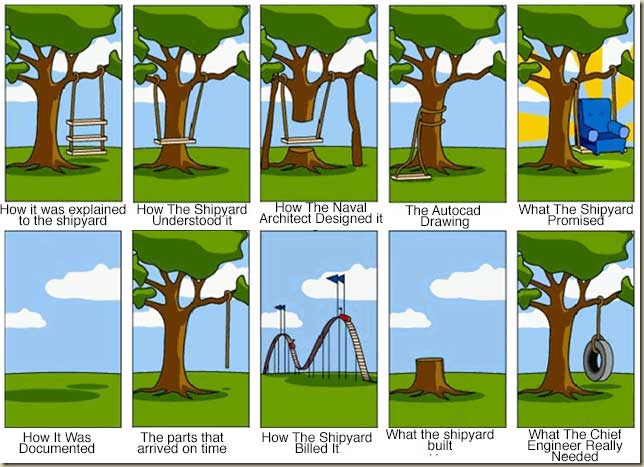