Now this is the type of diplomacy that I remember from several years ago. While it isn’t good for keeping American soldiers safe at home & US bombs & bullets safe in silos & magazines it’s awesome for keeping American mariners employed in the oil fields & moving military cargo. I don’t think the trade off is worth it though…

Russia's ambassador to Washington has been recalled to Moscow for "consultations" to determine how to move forward with relations with the U.S., the Russian Foreign Ministry said in a statement Wednesday.Why it matters: The news came hours after an...

Do you honestly think calling Putin out is going to lead to a war with Russia? C’mon man…

Do you honestly think calling Putin out is going to lead to a war with Russia?

That’s not how it works, at least I hope not. It’s a tit for tat thing that escalates. Take for instance the US support in Ukraine which boarders Russia. The Kremlin was furious about it & released audio of US diplomats discussing our end game there. Soon after Russias close ally uses chemical weapons on their own citizens crossing a “line” that our President says was un-crossable. Russia puts “advisor” soldiers near/in bases that the US would bomb for crossing that line. The US becomes the largest producer of oil in the world & starts exporting after several decades crippling Russia economy that gets 40% of tax revenue from their oil sells.

World superpowers pulling ambassadors from other superpowers capital is a big tit for tat. It’s not like that innocent silliness of nuking hurricanes or buying Greenland.

That’s not how it works, at least I hope not. It’s a tit for tat thing that escalates.

I’ve read this movie script several times since I slid into the world seven decades ago. Bay of Pigs, etc. Calling out Putin for interfering in our elections is peanuts compared to previous provocations. Spoiler alert: I’m not worried about a shooting war.

The question is, what do you do when foreign powers interfere in American elections? Allow it? Say it never happened? What would you do?

(I’m chuckling because some people on this very site (not you) said P46 has Alzheimer’s. He’s weak, they said. Feeble. Now some of these same people are afraid he’s paying too much attention and is too tough…

Fun fact: The last time the USA was in an active shooting war against Russians (as opposed to a veiled fight like the Korean war) was in 1919. At the end of WW1, the USA and other Great War Allies joined in on the White Russian (non-communist) side of the Russian civil war. 13,000 U.S. troops in the Vladivostok region. We pulled out in 1925, I think, when the Reds got the upper hand.

The question is, what do you do when foreign powers interfere in American elections? Allow it? Say it never happened? What would you do?

Whatever they (us, them, whomever) do when we get caught meddling in each others elections that doesn’t involve the proxy wars that the US has become infamous for. I really hope the US government did things to try to slow down Putin’s expansion plans. I know we did in the Ukraine. We haven’t started any proxy or oil driven wars in half a decade & I’m not happy to see superpowers pulling ambassadors. Down play the Korean War, Vietnam War, Iraq Wars & Middle East US Government bombings all you want but that shit ain’t any good.

But like I said, war is good for business as long as it isn’t on our soil. I know they’ll be plenty of Americans cheering for heighten tensions & conflict.

RE: Syria/ISIS and Yemen: Are those proxy wars, and if so did we start them, and regardless, are they worth U.S. fighting over, or spending money on?

regardless, are they worth U.S. fighting over, or spending money on?

In my opinion, Nope. I’ve known people who went to Syria & read articles & watched news about that place. Syria, under Assad before the civil war we helped fund & orchestrate was 10x better than Saudi Arabia. In Syria they had mosques, synagogues & churches walking distance from each other. In Saudi Arabia you go to jail & get tortured if you own a Bible. In Syria women could vote, drive cars & go out by themselves, things that were forbidden in Saudi Arabia. Why we bow down, bend over backwards & forward for the Saudi Royal family & try to overthrow the dentist dictator of Syria who spent most of his young adult years in the UK is beyond me. None of our business IMO.

No one has clean hands.

This is the eternal conundrum of that part of the word. Do you support a brutal dictator that keeps a lid on all the various factions that want to kill each other or do you support “democracy” which frequently translates into we all vote to have a huge civil war?

I don’t support either one. It’s none of our business & not our country. We had no dog in the fight until we intentionally decided to start flooding that country with money & arms to cause all that death, destruction, suffering & refugee crisis. I do believe Assadd & his Russian allies could have put an end to their civil war & killed off ISIS faster if we weren’t funding his enemies. Yes, I believe the US giving money & arms to the rebels & Russia giving money & support to Assad was another example of one our many criminal, immoral proxy wars. What’s worse, the CIA reported to Congress that some of the money & arms we sent to Syria ended up in the hands of ISIS. I was against it from the get go. Syria had a lot more breathing people & the EU had a lot less refugees before we started spreading our distorted form of freedom there.

Behind the Sudden Death of a $1 Billion Secret C.I.A. War in Syria (Published...

The shuttering of the C.I.A. program, one of the most expensive efforts to arm and train Syrian rebels since the 1980s, has forced a reckoning over its successes and failures.

The U.S. bought this anti-tank weapon. Within 59 days, ISIS had it.

Weapons bought by the U.S. military ended up in the hands of ISIS fighters within two months, according to a report published by Conflict Armament Research.

Does the truth matter? Putin is a killer. There is no doubt about it.

He has used nuclear and chemical weapons to kill Russian dissidents in the UK. He also killed and sickened some British citizens in the process. He tried to kill his main political opponent in Russia with a banned chemical weapon.

And that does not even scratch the surface of Putin’s malicious misdeeds.

From the NY Times article I linked above. Like I said, I was against this proxy war business from day one but I wonder how much blood is on my hands as a US taxpayer? I have near zero faith in DC & our military industrial complex & fully expect they already have another proxy war planned some where. We’ll help kill a couple hundred thousands or million people & displace additional millions to the EU & US.

From the NY Times:

“But by late 2015 the Russian military offensive in Syria was focusing squarely on the C.I.A.-backed fighters battling Syrian government troops. Many of the fighters were killed, and the fortunes of the rebel army reversed.”

"“In many ways, I would put the blame on the Obama administration,” Mr. Lister said of the C.I.A. program. “They never gave it the necessary resources or space to determine the dynamics of the battlefield. They were drip-feeding opposition groups just enough to survive but never enough to become dominant actors.”

I guess another proxy war with Russia would be better than a repeat of this? 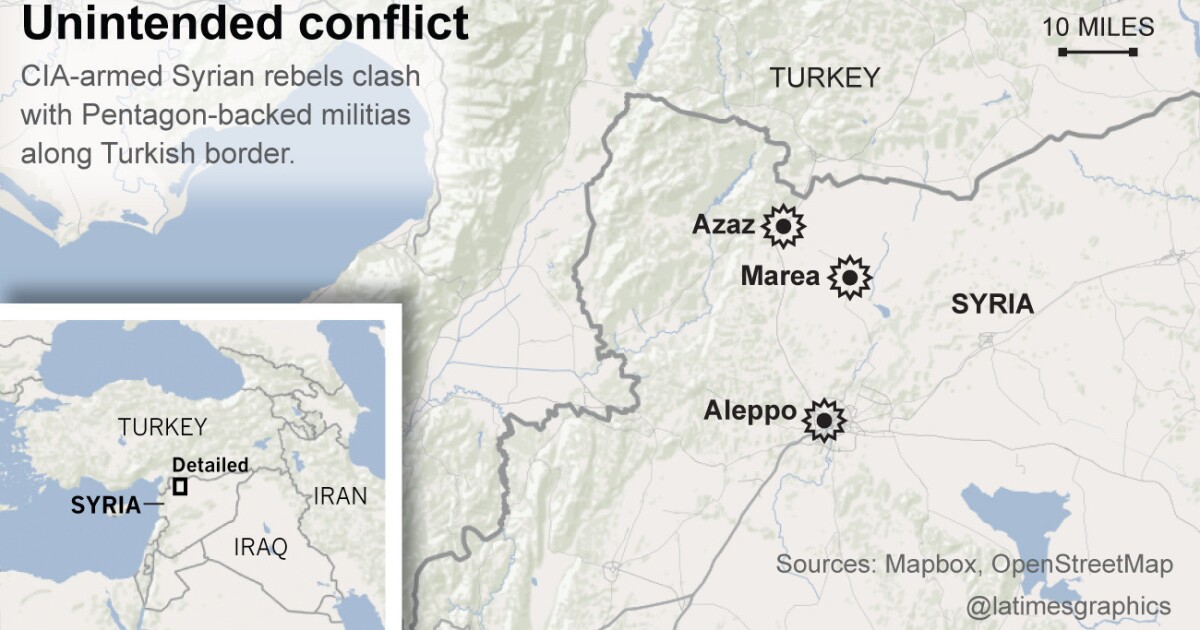 Syrian militias armed by different parts of the U.S. war machine have begun to fight each other on the plains between the besieged city of Aleppo and the Turkish border, highlighting how little control U.S. intelligence officers and military planners...

You have to give them all points for creativity at least. Maybe the Department of Agriculture can fight HUD or something LOL.

I agree. Biden is the new guy on the cell block. Unless he wants to spend 4 years as a prison bitch he needed to find the old boss of the cells and kick him in the nuts.

He has used nuclear and chemical weapons to kill Russian dissidents in the UK. He also killed and sickened some British citizens in the process. He tried to kill his main political opponent in Russia with a banned chemical weapon.

One thing he didn’t do yet was have a US resident reporter who worked for the Washington Post killed, chopped up & put in suitcases like the Saudi Crowned Prince did? That family has done things just as worse than what you mentioned about Putin & they don’t even have fake elections like Russia. They just say, “I’m King until I die, deal with it bitches.” Do you think the POTUS will call them out for being the killers they are? Me neither because we don’t giving a shit about people in Saudi Arabia or Russia. It’s all about money & feeding our war machine. Don’t support it or make excuses for it.

It’s all about money & feeding our war machine. Don’t support it or make excuses for it.

Your comments about P46 and Saudi Arabia make sense, except about the part of feeding the war machine. P46’s administration has stopped supporting the Saudi’s Yemeni war.

[I corrected my earlier post. The support started in P44’s watch and continued in P45’s.]

The Saudi-Yemen war started in 2015

The Saudi-Yemen war started in 2015