Pinoy seafarer MAY be banned from EU ships

You missed the point, you can check a pinoy cert today and the gov say yes we issued it.
What they cant tell you is how that seafarer earnt it.
A huge number came from fake ones that were converted to stcw 95
Philippines doesnt have any records prior to the conversion.
They cannot check what college the seaman went to or any seatime.
The Philippines used to have a department that issued all certificates for everything.
That has now changed and it belongs to the marine department, hence the lack of records.

I learnt al this when we had a couple of ‘permanent 2nd mates’ as the Indian crew called the old pinoys guys with very little skills.
I noticed one day when one was updating a chart with a black biro where its magenta.
So he was not only totally colour blind but he never knew what colours are on a chart.
So the office checked
Another one couldnt transpose a position from one chart to another with a different scale

One of the MARINA's mandates is to integrate the development, promotion and regulation of the maritime industry in the Philippines.

Agreed. There is also a strict limitation on the number of days Filipino seafarers can work aboard US vessels as riding gang - 60 days total in a calendar year (1 for 60 days; 2 for 30 days; 3 for 20 days; etc).

However, the manning agencies write 3-month contracts for each Pinoy working aboard US vessels.

Some US operations try to get around the limitation by labeling riding crews as shipyard workers. The companies fly the Pinoys to the Canary Islands or South Korea and claim the Pinoy workers don’t perform any work on the vessel until it reaches a port in another country.

Personally, I find that claim to be dubious at best.

… as proven by the fact that they don’t have a worse safety record than anybody else.

Maybe that says more about the quality of training in general.

Rather, each flag is required to make its own determination of the compliance of a flag’s certificates they will recognize. Apparently the EU had done that with the Philippines and found them deficient.

But do they say how it was deficient?

I have worked with quite a few Fillipino officers and all of them could do their job. Officers from the Philippines are probably the biggest national group in the world, if their training was so bad then there would be a lot more high profile incidents involving mariners from there, but there haven’t been many recently. Many of the recent high profile incidents seem to involve Masters from India.

The original article linked by the OP doesn’t state the particulars of the non-conformities. It could be training documentation or issues with particular programs.

As it a potential blanket ban I would lean towards documentation and not necessarily the training those seafarers received.

I have worked with hundreds of Philippino officers and ratings aboard U.S. flag vessels working in West Africa and the Persian Gulf. As master, I was the only American aboard. I have worked with excellent and sub-standard Pinoy mariners. I remember years ago there were many bogus DP schools in the Philippines offering both basic and advanced courses with fancy certificates issued.

Lots of Pinoy officers and ratings are employed aboard U.S. flag vessels working overseas. USCG requires an American master, but ALL other crew were foreigners. Mostly Philippino with a number of officers from Poland, Russia, Ukraine and Croatia.

I remember years ago there were many bogus DP schools in the Philippines offering both basic and advanced courses with fancy certificates issued.

What constitutes a “fancy certificate”? Are they not international approved DP certifications? IMCA, NI etc.

Back in 2006 there were numerous DP certs presented to me while completing DPO joining checklists that most certainly were not from NI, IMCA or any other recognized training organization. One 2nd mate presented one that he had printed himself at his own DP “school” on one of the outer islands. He told me his school’s only equipment consisted of one old PC laptop with a PowerPoint program. He said he shut down his schooling endeavor, and applied at my company when he found out how much Pinoy DPOs were being paid in Qatar. BTW…he was absolutely and completely unqualified as either a DPO or a 2nd mate. To be sure, I Also worked with some excellent DPO/mates from the Philipines.

Maybe that says more about the quality of training in general.

Yes it may do.
It also confirm that there are good and bad seafarers of all race, religions and of all nationalities.
That there have been a problem with some that try to cheat and/ort bribe their way in stead of studying and work hard is not limited to one nationality.
What exactly has been found by the EU auditors are not stated, nor whether it applies to individual Academies, test papers or license issuing authorities.

Yes I have personal experience of fake and “purchased” licences.
In 1974 I made “pierhead jump” to take a scrap ship from Singapore to Taiwan.

The Master that was supposed to do the job had suddenly quit for some (to me) unknown reason. I came on board just before departure from Singapore, but before long I realized that the three Mates were somewhat lacking in capabilities.
The trip was short, in open waters and in expected good weather (after NE Monsoon) so I decided to proceed, with strong instructions to call me if they saw any ships anywhere near.

This was long time before STCW’95 and any electronic checking was possible. On questioning after the trip it showed up that the Pinoy Ch.Mate had “upgraded” his ticket by getting a Master’s License printed in Saigon.
The two Indonesian Mates had bought theirs without completing the Academy, or failed exams.

This was at a time when such things were not unusual and quire a few “Panama licenses” were floating around among seafarers of many different nationalities.
For this reason Singapore made a rule that only licenses issued by the same national authority as the passport was accepted on Singapore ships.

Foreign seafarers cannot be part of the crew of the US-flag vessel, particularly vessels under contract with the US government.

US-flag OSVs operating overseas have mostly non-US crews. Only Masters have to be US citizen.

It’s my understanding, which understanding may be flawed, that nonresident aliens can not be a member of the crew on a US-Flag vessel under contract to the US government.

This is of course correct. Exceptions to US crew requirements for working in the oil industry in foreign EEZs have been in place for a long time and are well known.

There are exceptions for US vessels that need to replace crewmen on short notice in foreign ports too.

Are there some foreign crewmen working illegally on US vessels outside the US? This answer is obvious too.

Are there some foreign crewmen working illegally on US vessels outside the US? This answer is obvious too.

Do you believe US-flag vessels use only foreign crewmen who live in the US?

All this may be obvious to you, but do you have any facts and figures?

That crewing exception for OSVs working oversea exists is well know. I don’t know how long it has been the case.
In 1970 I worked for a Bayou boat company in Singapore with 5 boats operating in S.E.Asia.
All flying US flag and with mostly non-US crews.(Some Mates and Engineers were US)
The US Embassy was watching like hawks that the Masters were American citizens, but couldn’t care less about their maritime credentials.

There are exceptions for US vessels that need to replace crewmen on short notice in foreign ports too.

What is so exceptional with US vessels? Before the pandemic crew change was simple in most port, although some did not allow more than 24 hrs. transit time without visa.
(In Saudi they even kept rig crews w/o visa waiting onboard the crew boats until 4 hrs. before flight time, but that applied to all nationalities)

Of the years I have observed a few things, and heard about a few other things from reliable sources.

The US Government does not seem to do much about the many millions of illegal aliens living and working in the US. It’s allowing at least another 1 million a year to walk cross the southern border. This is not news to anyone.

It’s illegal for any employer to hire illegal aliens in the US, yet millions of employers do. Enforcement is spotty. This is well known.

Some states, California especially, provide drivers licenses and documents to illegal aliens, and do everything they can to obstruct Federal immigration enforcement. This is not news to anyone.

Does this sound to you like a US Government that is motivated and able to make sure that there are no illegal aliens working on US vessels?

You are welcome to your own opinion, just as I am welcome to mine. It doesn’t make any difference to any of us what others choose to believe. 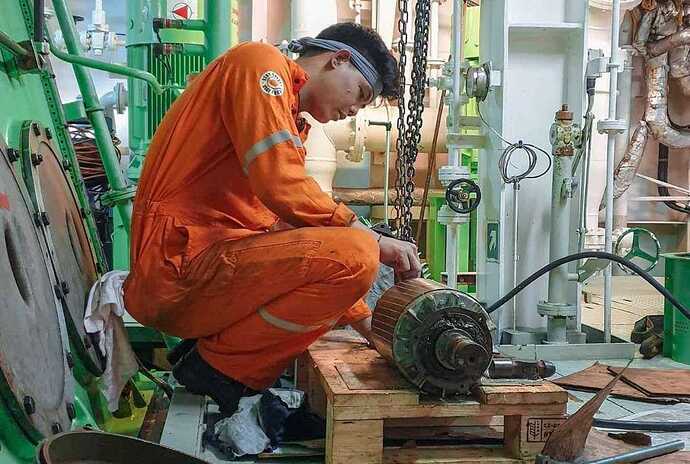 About 50,000 Filipino seafarers could lose jobs if banned from EU-flagged ships over compliance

Will this resurface next year?

Will this resurface next year?