Pinoy seafarer MAY be banned from EU ships 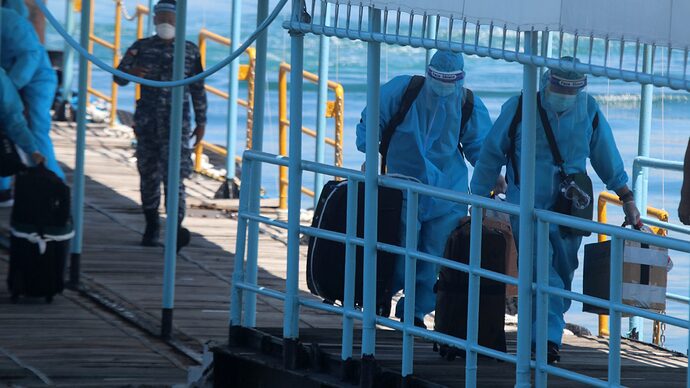 The EU gives the Philippines until March 10 to submit proof that it complies with international standards of maritime education, training, and certification

Not explained in the article is why the EU was investigating. A frequent comment here is about recognition of other flag’s certificates. STCW does not require flags to recognize each other’s certificates if they are on the IMO’s “so-called white list.” Rather, each flag is required to make its own determination of the compliance of a flag’s certificates they will recognize. Apparently the EU had done that with the Philippines and found them deficient.

They need to look at Indonesia first, they have woeful skills.
The problem the Philippines has is they converted fake certificates to real ones in the conversion to stcw 95 and have no records of how those people got their certificate prior.

Before STCW’95 false credentials was a problem, not only with Pinoys.
With electronic records today it is possible and required to check credentials before hiring seafarers.

But credentials does nor always equates skills, abilities, or work ethics,.
Nor does the nationality of the holders of such credentials.

Any idea if any US-flag vessels use Pinoy seafarers? If so, any idea which ones?

There’s a fair number of Filipino workers who hold US citizenship or a green card in the US fleet. As for riding gangs, I haven’t encountered any, although in the past for boiler work their frequently small stature would have been of benefit.

Any idea if any US-flag vessels use Pinoy seafarers?

The article refers to seafarers holding certificates issued by the Philippines and whether those certificates will be recognized by EU countries for service on their vessels. Any Filipino mariners on U.S. vessels hold original documents issued by the U.S.

I’m sure this will be sorted out. Without Filipino mariners commerce would cease for a time.

I don’t quite understand your comment. What original documents issued by the US are you referring to? If a Pinoy is not a citizen or resident of the US, how do they receive US documents?

If a Pinoy is not a citizen or resident of the US, how do they receive US documents?

They are citizens or residents of the US.

Which Pinoys are citizens or residents of the US? Not the Pinoys I know who work aboard US-flag ships. They are hired out by the likes of Magsaysay or LOTS International to work aboard US vessels with federal government contracts. And, they certainly do not receive any US documents while working aboard those vessels.

Well every Filipino I’ve ever sailed with has held a US MMC.

Then they must be Filipinos who moved to the US or applied for US citizenship.

Yes. That what we’re trying to tell you.

Is the article above discussing Filipinos who live in Europe or the Philippines?

I’m just saying that US companies hire nonresident, non-US Citizen Pinoy seafarers to work aboard those US-flag vessels contracted to the US government.

There are a shitload of Filipinos who are native to the Philippines, but are now US citizen/residents and sail aboard US ships under US documents. I imagine anything having to do with the EU and their recognition of STCW training from a foreign country has nothing to do with these individuals.

I would agree with that statement.

Agree, this will be sorted out, if not because the shipping world as we know it would come to a complete stop without them, than because this doesn’t apply to all Maritime Schools in the Philippines, nor to all licensed officer from there. The majority are well qualified and experienced, as proven by the fact that they don’t have a worse safety record than anybody else.

Besides, the fleet owned by EU shipping companies are mostly registered outside EU, so would not be affected by any ban on their service on EU flag ships. .

A mostly short sea/ European company that I worked for decided to replace all their Portuguese crew with Filipinos one weekend.
Paid off all the Portuguese and flew out a whole new box of Filipinos.
2 weeks later they had to do a complete reversal because they were in breach of European contract laws.
Cost an absolute fortune in money and a huge amount of ill will just because some shiny arsed desk warrior came up with ‘a good idea’.
Shore side bastards.

I’ve never understood how foreign riding gangs can work on US vessels.

Of course they are not members of the crew, but the aren’t they “working in the US” when they are working onboard a US vessel, regardless of where the vessel may be located?