Goodbye today for Ernst Borgnine…I knew this day had to come but I am still sad that is finally has.

Ernest Borgnine, who created a variety of memorable characters in both movies and television and won the best-actor Oscar for his role as a lovesick butcher in “Marty” in 1955, died Sunday. He was 95.

Borgnine’s longtime spokesman, Harry Flynn, told The Associated Press that Borgnine died at Cedars-Sinai Medical Center in Los Angeles with his family by his side.

A prolific and talented character actor, Borgnine was known for gruff, villainous roles such as the heavy who beats up Frank Sinatra in “From Here to Eternity” and one of the bad guys who harasses Spencer Tracy in “Bad Day at Black Rock.”

Borgnine, who earned a salary of $5,000 for playing his Academy-Award winning role Marty, once said “I would have done it for nothing.”

Borgnine, who was born Ermes Effron Borgnino on Jan. 24, 1917 in Hamden, Conn., began acting after serving in the Navy during World War II. He made his film debut in 1951’s “Whistle at Eaton Falls” before winning an Academy Award four years later. He appeared in other notable films including “Jubal,” “Flight of the Phoenix,” “The Dirty Dozen,”“The Wild Bunch,” “The Poseidon Adventure,” “Johnny Guitar,” and “Escape from New York.”

“No Stanislavsky. I don’t chart out the life histories of the people I play,” Borgnine told The New York Times in 1973 when asked about his acting methods. “If I did, I’d be in trouble. I work with my heart and my head, and naturally emotions follow.”

Sometimes he prayed, he said, or just reflected on character-appropriate thoughts. “If none of that works,” he added, “I think to myself of the money I’m making.”

He was also known as the Navy officer in the television series “McHale’s Navy,” which aired from 1962-66. Younger audiences would know him as the voice of Mermaid Man in “Spongebob Squarepants.”

Borgnine earned an Emmy Award nomination at age 92 for his work on the series “ER,” and was honored with the Screen Actors Guild Life Achievement Award in 2011.

“The Oscar made me a star, and I’m grateful,” AP reports that Borgnine told an interviewer in 1966. “But I feel had I not won the Oscar I wouldn’t have gotten into the messes I did in my personal life.”

The actor was married five times, including to singer Ethel Merman, who became his third wife in 1964. The marriage barely lasted a month.

He is survived by his fifth wife, Tova Traesnaes — whom he married in 1973 —his children Christofer, Nancee and Sharon Borgnine; a stepson, David Johnson; six grandchildren; and his sister, Evelyn Verlardi.

Lieutenant Commander Quinton McHale, USNR*…you’ve been an inspiration and hero to me since I was just a little shaver and today on your passing I dip my ensign “Parker” in salute to you!

Fare thee well sir…you are going to be missed.

*according to Wikipedia: In the first episode it is established that McHale is a former merchant ship captain who was intimately familiar with the South Pacific over a period of 20 years.

He was a nice guy. I met him once while working a change of command cermony in Long Beach,Ca. I was working brow(gangway) watch and welcomed him to our ship with a crisp salute and a warm welcome. Very entertaing fellow,

[QUOTE=Rebel_Rider1969;73843]He was a nice guy. I met him once while working a change of command cermony in Long Beach,Ca. I was working brow(gangway) watch and welcomed him to our ship with a crisp salute and a warm welcome. Very entertaing fellow,

You sir are one very furtunate man indeed and I envy you!

He’s just an actor… Was… Let it go

And by the way… He was a tyrant in the movies… So why so sad:(

Man…don’t you know me enough by now that half of what I say is BS? I’m not crying sad but Ernie was one of the actors from the good old days of my youth and I’m sorry to see him go but go we all shall.

I have always held the character of McHale in high esteem though and I like to think there is a little McHale in me. He’s a fine role model for a vessel master with a competent yet colorful persona, a happy, tight knit crew and a penchant for pissing off management frequently yet always getting the job done and done well at that. 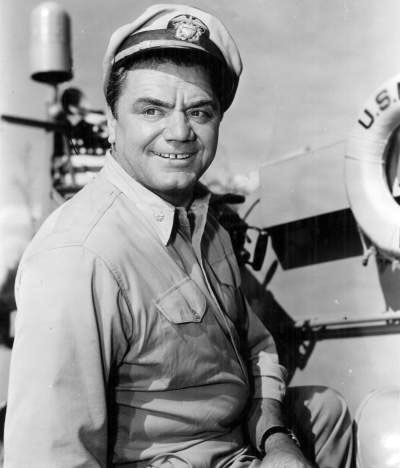 Actor Ernest Borgnine has died today at the age of 95 of died of renal failure at Cedars-Sinai Medical Center with his wife and children at his side according to the Associated Press. Best known as Lieutenant Commander Quinton McHale on the hit series “McHale’s Navy” from 1962 through 1966.

The series took place during World War II in the Pacific where McHale commanded a PT boat similar to that of then president John F. Kennedy. Being stationed on an island away from his commander, McHale and his men followed their own rules to achieve their goals. As unconventional as they were, the men of McHale’s Navy achieved their goals much to the dismay of Captain Binghamton who knew they were not following the conventional naval regulations. Despite continual attempts, Binghamton was not able to catch McHale breaking the rules.

McHale clearly knew how the Navy expected his men to act. Yet McHale allowed the rules to go unenforced as he was focused, like today’s contemporary managers, on the end results. As long as they fulfilled each mission successfully McHale was happy.

To many McHale’s Navy seemed to be an unorganized band of misfits. But through McHale’s leadership they used the disciplined naval policies when necessary to capture the enemy.

Borgnine’s portrayal of McHale was a role he played with believability and was the character he would never be able to shake in future interviews. But it was a role that oddly gave an early insight into a workplace culture of ultimate success.

Now let’s not hear any more of this blasphemy about Ernie B! Dismissed…ya swabs

He will be SORELY missed by my DAD (F.L.S.) & myself!! Rest in Peace Mr. Borgnine!! My favorite movie by him was “The Emperor of the North”… Well, it was ONE of my faves.

Sorry, that was my bad… I was in a bad mood when I wrote that. It was disrespectful and I’m sorry. EMPEROR OF THE NORTH was one of my favorites.

no worries mayte…apology accepted & thanks for it

And by the way… He was a tyrant in the movies… So why so sad:(

He was the founder of the c.captain school of leadership … Let the man grieve in peace.

[QUOTE=KPEngineer;73916]He was the founder of the c.captain school of leadership … Let the man grieve in peace.[/QUOTE]

I am proud to say that it is a school with a well founded tradition of many hundred of years of wiseass humor. I myself have the honor to sit in the Andy Rooney Chair at the College of Curmudeonliness. Our school also in home to the Hunter S.(Shark) Thompson Sarcasm Fellowship and awards the annual John Belushi Comedy Genious Prize.

Our esteemed Dean of the Faculty "And I say to you gentlemen that this college is a failure. The trouble is we’re neglecting football for education.”—Professor Quincy Adams Wagstaff

It’s still on daytime television saw it the other day when I was bored.

[QUOTE=Jetryder223;73965]Too young to know what you old salts are talking about so I YouTubed “McHales Navy” and watched a few episodes…

For our young members…TV from a time when TV was cool!

This was my childhood right here!

He was a great actor and played in many movies in the recent 15-20 years. Was also on in the movie “McHale’s Navy”

Wow! I like it, thanks for getting me hooked lol, man my generation is missing alot

Is mr parker still with us?

Indeed he is. Do you know that Borgnine and Conway did the voices for Mermaidman and Barnacle Boy on Spongebob?

Yeah, I watch Spongebob! You want to make something of it?