In NYC and in Philly in BFE places. I keep seeing the same spray painting? ?? Anybody else seen it??

I’ve seen a Meow Man tag in every port I’ve been to. I was told he was an old tankerman, but no one knows who he is or if he is still around.

ME? The three letters “KPS” always brings a smile to my face especially above the urinal in some waterfront dive!

The largest fraternity in the world. The first letters in “KPS” stand for “Kings Point Sucks,” Kings Point being the famed maritime academy, USMMA, located in Kings Point, NY. KPS is often what students feel during bad times at the Academy, it is the tying factor for all students, past and present. The brotherhood of KPS is something no other college in the world can make a claim to. KPS is written in bars and common port areas all over the world. Most students, during their allotted time at sea (required by the school) will carve KPS somewhere they have been.

The United States Merchant Marine Academy is one of five Federal Service Academies along with USAFA, West Point, USCGA, and USNA.

Graduates may enter into the maritime service or take a commission as an officer in any active or reserve armed service. Located in Kings Point, NY, the academy is highly regarded and well known for producing some of the nation’s brightest and most successful military and business leaders.

[I][U]That being said, it is a great place to be from, but not a great place to be. It is notorious for being ranked as the school with the least happy students, and some of the worst food and dorms in the nation by Princeton review. See: KPS[/U][/I]

It is usually followed by a class year

Meow Man is alive and well.
He still tags anything that stands still long enough.
He tries hard to keep his identity secret.
I respect his wishes.

“KPS” is indeed alive and well. It was alive in my early sailing years and, yes, I saw it in just about every bucket-of-blood joint I visited throughout the world, always posted in the shit house. It’s like the word “ZOMBO” - it will not die. I last saw it in a dive in a small Wyoming town (can you imagine!).

Meow Man is ever where I have seen it in the Gulf and seen the tag where I have no idea how he/she got there.
been around 25-30 years that I know of,and saw it on a background on CSI NY
Who knows?
That one stray cat

Does KPS = KPE with the E being the greek S? I see this on every f’n ship, silly queens pointers!!!

KPS - Kings Point Spirit is what we were told.

but KP Sucks works too.

Some Meow Man images for you: 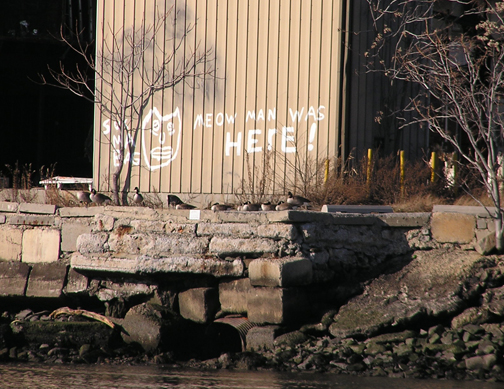 KPS - Kings Point Spirit is what we were told.

but KP Sucks works too.

The “Spirit” is molded by the shared experience that it Sucks so it generally can mean both but the person who left it certainly had their own idea of which feeling was on their mind.

I see Meow Man tags all over Staten Island/NJ. A few are at waterline on tall fuel docks so he’s on a tug I would think. Using chalk is weird though.

[QUOTE=Mullet Farm;89686]I see Meow Man tags all over Staten Island/NJ. A few are at waterline on tall fuel docks so he’s on a tug I would think. Using chalk is weird though.[/QUOTE]

Nothing weird about it. If you’re open gauging, there’s an abundance of chalk.

FTN is still out there. I’ve even seen it written in weld bead on the bulkhead of a newbuild aircraft carrier- before the insulation went up. It’ll be there till she’s razor blades.

Of course, peak FTN was during the 70’s and 80’s when the part-the-hair-in-the-middle Zumwalt doper era was slowly giving way to the over-bloated Reagan era. Urinalysis was in its infancy and there were still plenty of “growing pains.” Chief Petty Officers couldn’t openly sell quaaludes out of their desk drawers anymore. They were “interesting times.”

And the Army had FTA - short for Fun, Travel, Adventure.
Or something close (;-))

[QUOTE=“Mullet Farm;89686”]I see Meow Man tags all over Staten Island/NJ. A few are at waterline on tall fuel docks so he’s on a tug I would think. Using chalk is weird though.[/QUOTE]

MeowMan… one good example of an individual that needs fragging… But honestly, having sailed with the lunatic, he is an awesome whack job Captain. P.S. he is still alive and well. I mean not so well… But you get the idea. He is still alive and kicking.

Stuff I learn on gCaptain…

I heard he works for Reinauer on Staten Island.

Thats the wrong Facebook page this is the one, been following it. funny pictures

Its actually Kings point Sucks ,saying from way back.

So, you have been writing on shit house walls too. Oh, you big bad boy!