Different strokes for different folks. For me to go work tugs of any type I would be on backup plan Q for finding work. I like OSVs some don’t we all have a place.

Understood. That’s pretty much standard then.

This is government (Bureau of Labor Stats) data and is 18 months old so not detailed by type, endorsement, etc. but I guess it is regionally accurate. Maybe bump up 10% given inflation. 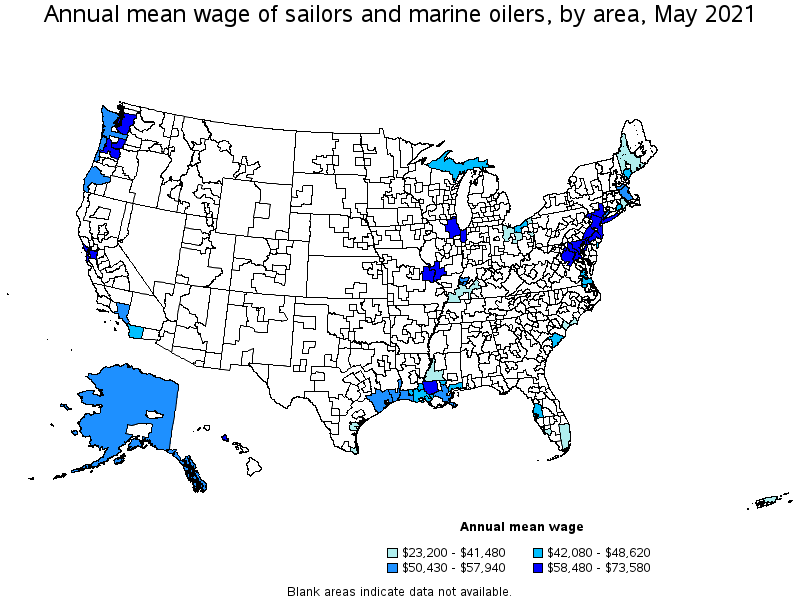 Not really a useful graphic considering 95% of the lower 48 shows no data.

Not really a useful graphic considering 95% of the lower 48 shows no data.

How many vessels employing oilers operate out of Wyoming?

I’ve studied the BLS data for years and have found it fascinating but nearly useless . The data is collected by questionnaires sent to the HR departments of boat operating companies. (An unintended consequence of the graphic is that it apparently shows where such companies are concentrated).

The questionnaires are sent to certain companies several years in a row, and then the BLS moves on to another set of companies. So the info is sampled. It doesn’t come from all companies every year. So as far as that goes the data is accurate.

But the BLS doesn’t correlate types of companies. The data from OSV companies are lumped in with data from whale watch companies, etc. You can make geographic comparisons between pay ( LA vs WA vs MA) but not between tugs and OSVs.

And the data categories are too broad. I don’t have the BLS data sheet open but I believe one covers Captains, Mates, and Pilots. No license divisions. So the gross annual pay for everything from a tug captain to a bar pilot is averaged together. Since there are more tug captains than bar pilots the wage data would skew towards tug captains’ wages.

ABs and OS are lumped together, as are most engineer ratings.

One thing the data can be used for is to determine how wages change in time for ALL mariners, as a group. If someone wanted to determine if wages for mariners have kept up with inflation over the last 20 years the BLS data would be one place to start. But the result would always be generalized.

You can make geographic comparisons between pay ( LA vs WA vs MA) but not between tugs and OSVs.

I would say the only thing accurate about this graph is how harbor pay differs for locations. For example, a ship assist boat in one of the gulf states will pay significantly less than the same job in southern california.

Wait, G & H is giving those huge raises. Nevermind…but as far as unlicensed ratings, I’ll revert back to my original point.

Which makes sense. Most of us remember the rapid increase in OSV wages in the early 2010s, which drove a general increase in maritime wages across the U.S…

By May 2021 the mean annual gross for “captains/mates/pilots” was $98,330. A 21% increase from 2016, during which was inflation 22%. So it could be said with validity that for that cohort in general wages had not kept pace with inflation since 2016. But the data is so generalized, lumping in all sectors of the industry that it doesn’t mean much on an individual basis.

Many years ago I was talking to the CPA that handled my taxes. I had income from different endeavors as well as my salary from the maritime business as a chief engineer/consultant. I asked her how my return as a mariner compared to the average returns she filed for working folks. She said it’s relative. Yes, you make above average with your maritime pay, I have plumbers and electrical contractors that make more and they work from home. But you save more because you aren’t home. Your salary is determined by who you work for where their salary is determined by how much they want to work. Once you factor in insurance for medical who knows? If the USA ever adopts a universal health care system as most first world countries have you would be golden

Good points and I agree with most of what has been stated. Its data but noisy at best.

I thought the regional comparisons were most interesting and wasn’t sure how accurate the hourly wages are. With all the vessel types lumped together though regional comparison still may be dodgy. Good to know the data can give a rough guide on how wages are growing against inflation.

Another subject for discussion: salary.

Man… that is one thing I’ve damn near begged for at ECO for a while now. I’m on an even time rotation that would make it so easy for payroll (and my coordinator) to do that way too.

I have my guesses as to why they don’t want to take that direction, but I sure wish they’d offer it on a trial basis to see if folks would do it without abusing it.

As for pay rates, my boat has a very (VERY) specific pay scale that I’d get my peepee whacked if I listed, but I will say that ECO in my experience is right there with the rates posted for Harvey and Jackson… touch higher for officers and a touch lower for deckhands, but pretty close. Benefits… bout the same, except I can only wish we had WiFi/decent VSAT speed that were mentioned about Jackson.

Mariner Pay… Definitely an intriguing subject. Until recently- I would often reflect that we were behind shoreside pay rates- especially when one divides the dollars by the amount of hours worked.

In 1981 (aboard a D1 Tanker- running coastwise) I was grossing 10k a month all in- that’s base, OT and vacation as a Watch 3rd A/E. When D1 “absorbed” the BMO, that was basically the end of G2’s getting jobs because all the BMO stiffs got full books. So I ended up at MSC. The wages sucked- depending on what Horsepower scale you were working on- A3 Auto being the best- but everyone’s hire in and promotion grades back then were- Class B- which sucked.

Around 1985/1986- the industry was turned inside out by the MM&P havoc and later the USL Bankruptcy, this pretty much killed things in the commercial sector until 1990 or so when Gulf War I started. In 1988 I went with D2 (D1’s books were closed) and found out just how bad wages could get- “all in the name of getting and keeping contracts”- I’m glad the SOB who dreamt up that crap is now long dead. Yes, there were some excellent high paying contracts- but getting a job in those sectors was difficult at a minimum. Over time- (NOT overtime) things improved slowly- But there’s still the “high paying sectors” and the “lower paying sectors”- something that I think should go away and replaced with standard across the board wage scales- this is one reason that I have always advocated for a single Officers labor union-

We’re (as in the US Flag Shipping Industry) not doing very well these days- between the COVID restriction bullshit, unions and non-union entities trying to cut each other off- it’s getting nearly impossible to attract a younger- newer generation of US Flag Licensed Merchant Mariners- because the wages, advancement and perks are all better shoreside- in addition to being home.

Lately even the “Stripes of Shame” can’t attract or retain licensed (or unlicensed for that matter) personnel, despite offering 25% sign on bonuses- with their gold braided hats wondering why all of these people came, got trained and then left at their first opportunity- it’s simple, you’re not treating them right.

To those of you touting the high demand and high wages in certain areas of our industry- remember the old maritime adage- “a feast or a famine”. Use caution- fast bang for the buck isn’t usually a viable long-term strategy for someone planning to spend a lifetime in our industry…

It takes a minimum of 10 years of life to get an unlimited Chief/Master license (normal person). Very few are staying in the game long enough to achieve that. And those that hold the license, are often not renewing or putting theirs in continuity.

Once the SR officers leave the workforce, they can’t easily come back. The ship can’t move without them, and there is no way to import labor or fast track getting the license. Hopefully this means big increases in pay.

Man… that is one thing I’ve damn near begged for at ECO for a while now. I’m on an even time rotation that would make it so easy for payroll (and my coordinator) to do that way too.

I have my guesses as to why they don’t want to take that direction, but I sure wish they’d offer it on a trial basis to see if folks would do it without abusing it.

I’m surprised that apparently few companies have a salary system, especially those that employ their mariners on even-time. Over here the Accounting Department would be fine if all mariners were on salary, because:

About 1/3 of the mariners here (and 70% of officers) are on salary. It’s optional and the company doesn’t push it. To get on salary, you need two or three years of employment. (Cultural note: if you were raised in a former Soviet-bloc country you are less likely to go on salary. Why?)

and find out those worthless hands have ‘friends in the office’

OT off watch, No cost health insurance, 9% to pension…wish it was to a 401k., Paid travel if you live on west coast, they advertise 30-45 days and equal time, but mainly only Captains and Chiefs have set reliefs.