New year, new thread…
This time last year in the Tugboat Pay thread there was the best, most accurate accounting of mariner pay I have ever seen. Firsthand accounts of what mariners make at specific companies, instead of rumors. Maybe we can reproduce it for 2023. I’ll go first:

100 ton near coastal whale watching: 345/day starting plus 10% bonus and tips which vary greatly but are significant. Job is also advertised at $48 an hour but they don’t pay hourly.

I just looked at CTI’s website. The voyage description is a work of art.

“The work schedule, when it’s easy, is six hours on, six hours off. However crew members cannot rely on something like that, and it’s not unusual to work twenty-four hours straight, get four hours of sleep, and work another twenty-four.”

“Here are the facts: we have never had loss of life in Alaska, nor have we ever put anyone permanently in a wheelchair. Those are the facts.”

And …“Generally speaking, we say there are three types of weather in the Gulf: bad, worse, and awful.”

And …“The bad news is being seasick is just as unpleasant as you suppose; the good news is it’s usually over in a few days. And you’ll have plenty of work to keep your mind off of how awful you feel.”

*also, don’t mean this as a criticism. Just love the bracing honesty and it smells like adventure. And dirty socks, too.

Glad you brought up the work hours at CTI. Here is the work hour data from first quarter of 2022, the busiest/hardest time of the year. 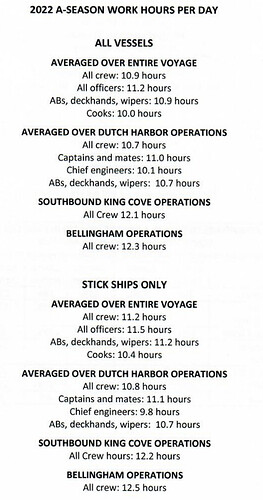 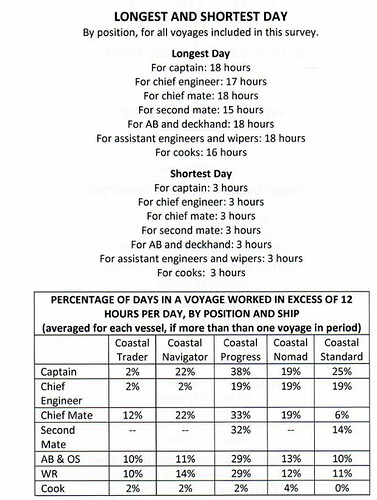 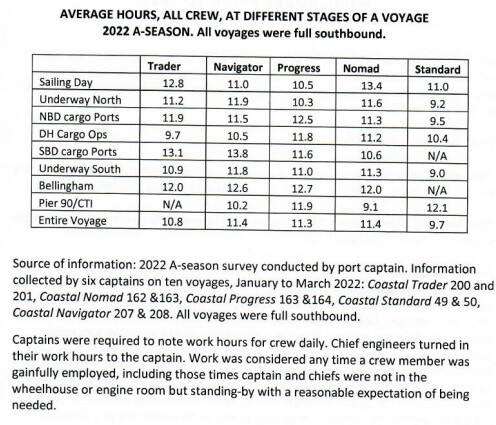 Here are the facts: we have never had loss of life in Alaska, nor have we ever put anyone permanently in a wheelchair. Those are the facts.”

I love this fact: in four decades of operation in the Bering Sea, in winter and in storms, we have never lost a man to injury or illness on a voyage. Not from accident or heart attack. And we have never put anyone in a wheelchair.

When I first started off in this company four decades ago I was told the trade was dangerous. And yet not a soul dead or crippled on any voyage, coming on half a century. How many maritime companies can boast that?

That’s impressive, especially for that part of the world.

Again, not being critical. Sounds like very interesting work!

Edit: also, I was kinda keying-in on “permanently” in a wheelchair.

It is surprisingly low for the operations they do but I imagine some of those days feel a lot longer.

It’s strictly a company thing. Mostly used for tracking efficiency. The fewer hours needed to work cargo, the more efficient the operation is. But you can’t tell unless you track the data.

The text you cited from the website is old stuff. Pre-2012, when we stopped hand-stacking and lots of at-sea transfers, which was inefficient.

Back in 2012 a voyage averaged 31.5 days long, and cargo days could be 24 hours long with handstacking cargo.

I just looked at CTI’s website. The voyage description is a work of art.

Haven’t checked out their website in quite sometime, but i recall how impressed i was with the candid honesty displayed there. You can assume possibly that they’ve had more than enough guys over the years that throw in the towel and possibly gripe about not realizing what they were getting into. I remember under their FAQ there was something about their day rates, someone saying ‘i can make more in the gulf’ and the response was 'by all means, go to the gulf then. ’ hahaha.

If only more employers were half as transparent. There’s a reason why at the bottom of most job descriptions it says ‘other duties as assigned’, but their website really leaves no room for misunderstandings during the hiring process at all.

This is good evidence that most tug companies are not paying enough.

I can think of a couple tug companies operating in alaska that aren’t either.

I understand the trade they are in, but the website says they are regulated as uninspected fishing vessels and the license requirements on the jobs page reflects that.

To be fair, many people work elsewhere for part of the year to make it sustainable and are motivated by the educational mission.

Thanks for this thread so I can evaluate my life choices lol.

Sorry to say in my part of the world not much has changed since last time this subject matter was discussed.

Yeah my company gave out raises last year and I have a feeling that will probably be it for a while. We’re pretty fully crewed up as well…

I’d say thats the same thing where I work. I think we are good on officers, but may need some ABs and/or qmeds.

I left the engine room to go back to a wheelhouse position. Took a pay cut to do it, but i am much happier.

…and according to what i’ve seen on this forum, i’m getting paid competitively for my current position.

Poling and Cutler, all day rates according to the current MMP contract…

Since all of our barges are unmanned, I think all the ab tankermen get 466, and os somewhere around 430. But I can’t be sure.

All but one of the boats works in and around New York. The one boat that usually works in the Gulf is on the same contract.

I think this forum is perhaps a valued place for mariners to vent about some of their experiences without fear of retribution from their employers or coworkers, so I wonder if maybe some people aren’t as forthcoming as they might be out of fear of doxxing themselves by revealing details of their employment, like their rank and pay. If there were a better way to submit the info anonymously I wonder if more people would contribute their information.

Understandable. Maybe not post company name or anything identifying.