The MOUNT TOURMALINE spotted off Shanghai during yard trials:

Is LNG the Fuel of the future, or just a transitional fuel?:

2021 was a year of dramatic progress and growth for LNG (Liquefied Natural Gas) as a marine fuel and its pathway to decarbonisation. Orders for LNG-fuelled vessels hit record levels while the bunkering infrastructure continued to expand at pace....

Here is a suggested alternative transitional fuel:
There IS an alternative to LNG as a ‘transition fuel’ – and it is greener and easier to use.

But Total Energies expect LNG to be an important fuel for this decade at least:

As we head towards IMO2050, there is no doubt that the future of shipping will comprise a mix of fuel solutions and the shipping industry will need all of them to meet future fuel demands. We believe LNG has an important role, along with bioenergies...

Threats of war is good for business (for some):

Will price of LNG be increasing worldwide as a result?

The MOUNT TOURMALINE called at Singapore for bunkering: 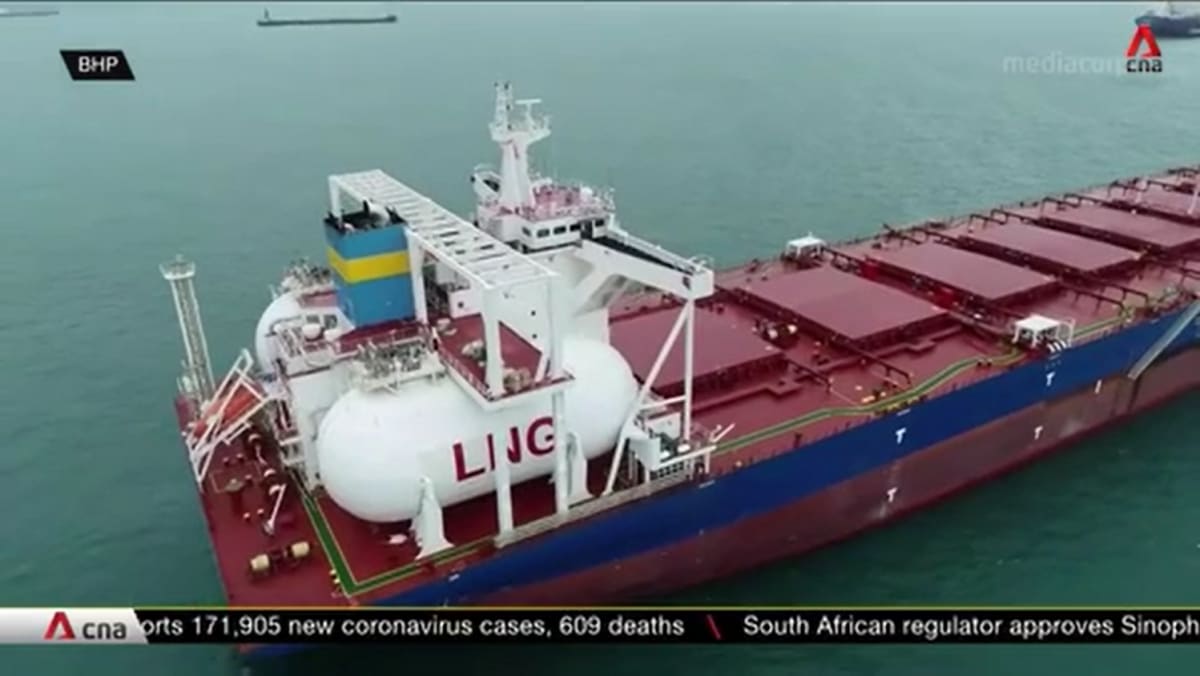 The Mount Tourmaline, the world's first bulk carrier running on liquefied natural gas, docked at Jurong Port for a top up on Monday (Feb 7). This marks a milestone in Singapore's voyage to becoming a major refuelling hub for greener ships. Neo...

Nothing new that bulk carriers make a bunkering stop in Singapore, but this is the first to receive LNG as bunker.:

Russian Zvezda yard has started working on another ice-class Arc7 carrier that will serve the Novatek-operated Arctic LNG 2 project.

Nakilat was recently awarded the ‘Sword of Honour’ by the British Safety Council. This is the fourth consecutive year that Nakilat has been recognized with this prestigious award, presented to companies which have demonstrated excellence in the...

For those not familiar with who and what Nakilat is:

Nakilat is a shipping and maritime company with the world's largest LNG shipping fleet. The company also manages and operates a ship repair and construction facility, provides towage, as well as shipping agency and marine support services to all...

Nakilat has formed a partnership with ABS with the aim of developing a decarbonisation strategy for its LNG carrier fleet.

The installation of the floating platform to be used in the production of Liquefied Natural Gas (LNG) above the Coral South gas field, within Area Four of the Rovuma Basin, off the coast of the northern Mozambican province of Cabo Delgado, is running...

Novatek continues to grow its network of LNG filling stations for trucks in Russia and Europe to meet growing demand in the road transport sector.

Company Novatek decides to develop the Ob LNG on the basis of a floating gravity-based structure.

European countries are rushing to become less dependent on Russian gas, but while many tout LNG as the perfect solution, the reality is different

Dutch gas grid operator Gasunie has secured a small floating storage and regasification unit from Belgian shipowner Exmar for its planned terminal in Eemshaven, as the Netherlands looks to reduce reliance on Russian gas.

Nothing like a good crisis for Governments around the world to get their proverbial “finger out”:

Germany is booking floating storage and regasification units (FSRUs), one of which could be operational as early as 2022, the country’s minister of economic affairs and climate, Robert Habeck, has said. Two energy companies, RWE and Uniper, are...

Putin’s war in Ukraine is good for Texas and the LNG Shipping market.

The shipbuilding industry in S.Korea and marine equipment suppliers all over the world will benefit as well.

Adnoc Logistics & Services (Adnoc L&S), the shipping arm of the Abu Dhabi National Oil Company (Adnoc), has tapped China’s Jiangnan Shipyard to build a pair of 175,000 cu m LNG carriers for delivery in 2025. No price has been revealed for the...

Petronas and Sabah Oil & Gas Development Corporation (SOGDC) have inked a memorandum of understanding for the first and largest nearshore floating liquefied natural gas (LNG) facility to be deployed offshore Sabah, Malaysia. The project, known as...

Sipitang is situated in Brunei Bay, not far from Labuan F.T. Better know as a popular place to lay up ships and rigs.