GOOD GOD ALMIGHTY!...LCS's are breaking down and costing millions to repair!

believe it or not…this is true!

This contract provides for the repair and overhaul of the Marine Trent 30 marine gas turbine engine, replacement of non-repairable re-assembly to the LCS configuration, and pass-off testing to validate performance.

Work will be performed in Bristol, United Kingdom, and is expected to be completed by February 2016. Funds in the amount of $9,000,000 will be obligated at time of award. Fiscal 2014 operations and maintenance (Navy) contract funds in the amount of $9,000,000 will expire at the end of the current fiscal year. The order was not competitively procured in accordance with 10 U.S.C. 2304©(1). The Naval Sea Systems Command, Washington, District of Columbia, is the contracting activity.

Tell me Rob that you cannot support this idiocy! Can you?

Better Rolls Royce than Thrustmaster! What a shame, wonder if it’s operator error, fatigue, or just poor workmanship on the original engine?

[QUOTE=The Commodore;141732]Better Rolls Royce than Thrustmaster! What a shame, wonder if it’s operator error, fatigue, or just poor workmanship on the original engine?[/QUOTE]

we’re not talking thrusters but LM2500 size gas turbines and yes, I would like to know why this ship needs its propulsion plant fixed already…WHO FUCKED UP? Someone sure as HELL is responsible? Marinette Marine or the US Navee or Rolls Royce themselves selling a defective POS to the gummint and collecting to fix their own shitty work?

You have to admire their can do attitude. These LCS ships have had many issues with not only propulsion but with their weapons systems and such. I had a few years away from workboats and was a dod contractor. Ops with these ships were cancelled if not delayed often due to breakdowns of some sort.

Yeah, “can do” it to the taxpayer at every opportunity.

This is what we get when everyone gets a bonus or another medal for everything but no one is held personally responsible for anything.

It’s time some admirals and CEOs were hung out to dry. The USA is ahead in one thing though, the race to the bottom.

It seems to be most gas turbine failures I know of (relatively recently a Chevron tanker and a local power plant) are caused by a loose bolt in the intake ducting. I would not be surprised if this were the case.

Here’s the specifics on the gas turbine failure: corrosion and damage from seawater ingestion due to…wait for it…design and construction screwups. Read the whole article. This ship is loaded with serious flaws and it’s costing us a king’s ransom to fix.

The Littoral Combat Ship USS Freedom is plagued by extensive corrosion and manufacturing issues more recent and serious than anything the Pentagon or prime contractor Lockheed Martin has publicly acknowledged thus far.

“There are other visible problems. LCS-1 was designed and built with a hole – apparently meant for ventilation – in the ship’s superstructure that allows seawater in on engine machinery. In another space, where air for gas turbine engines enters, there is a bank of prefilters that are meant to be welded tight against the bulkhead. [B]But saltwater has entered where a weld joining two corners was apparently missed in construction, causing the failure of a gas turbine engine after it ingested large amounts of seawater during the ship’s early operations. The issue has since been resolved, but that overlooked flaw cost the Navy another $10 million Rolls-Royce MT-30 engine two years later after launch.[/B]”

Fucking hell that’s really, really bad. It’s like these government contractors want their projects to fail so that they can be charged to fix their mistakes with brass not only being complicit but playing blocker. Plus, my jaw dropped when I saw these things were sitting ducks to anyone with a torpedo. Plus how does it save the tax payer any money by having the Navy do less maintenance? What ever the Navy guys don’t do has to be done by somebody and I guess that must be done at one of those uber efficient Naval yards. I think if things keep up, the Lockheed Martin variant of the LCS might very well top the V-22 Osprey as the most expensive, useless piece of shit our proud military has to show to the world.

Is the General Dynamics variant any better or is just as much a floating turd as the Lockheed POS?

They build these things in my home town and I’m thankful for the contribution to the local economy. It’s hard for me to reconcile spending this kind of money on an aluminum “warship.” We should have built more cruisers or frigates instead of giant crew boats with machine guns. I bet even Halter or North American could’ve built this same boat in half the time for a quarter of the cost with probably better results. Every time the navy is involved in building a ship the price quadruples and the “attention to detail” and “quality control” is laughable. I don’t know how many times I’ve been in a shipyard and heard guys complain about this. They say things like well I’m gonna take the torch and cut this off and then we will move it six inches over here to make it more functional. Then remark that thank God this isn’t the navy ship on the other side of the yard. If it was they would have to fill out all manner of paperwork and explain that the original design was shitty and what’s on paper ain’t gonna work. Now everything in that space is road blocked until the situation is straightened out. It seems like all this water ingress shoulda been discovered during these uber stringent testing and acceptance trials a naval vessel is supposed to endure prior to delivery. Common sense woulda said hey lets spray fire hoses directly into this fancy intake to simulate rough seas. How does such a failure if such a critical propulsion support system slip by not once but multiple times.

Here’s the specifics on the gas turbine failure: corrosion and damage from seawater ingestion due to…wait for it…design and construction screwups. Read the whole article. This ship is loaded with serious flaws and it’s costing us a king’s ransom to fix.

And they keep building them. On a tangent, sort of…

We argued against this and of course we failed.

I suspect that in a year or two, when all fourteen of these pigs have upgraded the wrong hold, We the People can spend more money to move the upgrades to where they should have been installed in the first place.

There is simply no question left to the conclusion that LCS’s are a failure as a class. Failed concept, failed design, failed construction, failed in operation…AN ABYSMAL TOTAL, COMPLETE, ULTIMATE FAILURE! 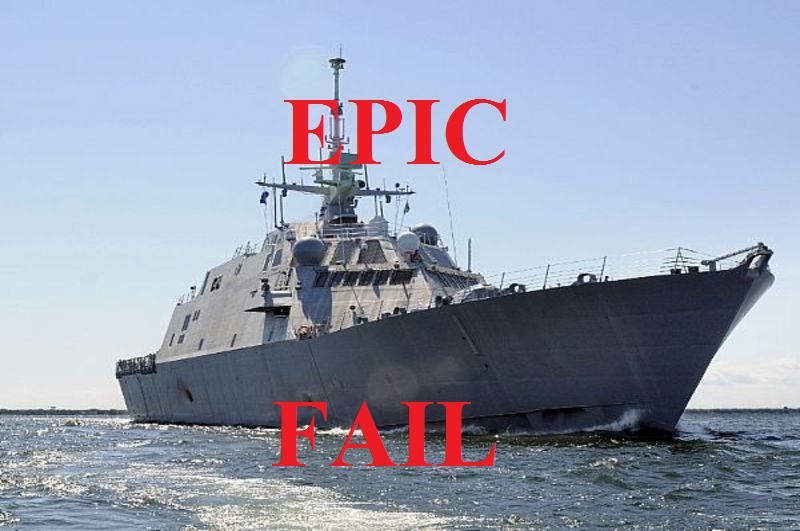 The Congress must demand the cessation of the building of any more of these failed ships immediately…POLITICAL RAMIFICATIONS BE DAMNED!

“I think that our shipyard in Mobile can make any modification that will be required under this program and do it right and do it at a price that makes sense,” said Congressman Byrne.

Ok so performance goals are not being met. If a modification is to be made wouldn’t this be considered warranty claim against the original contract? Why would we be concerned the shipyard could do it for “a price that makes sense”? Shouldn’t they be trying to make the customer happy by building what they said they could build? For fucks sake I’m so confused…

Damn that’s it I know what line of work to get my son into when he grows up. Government procurement and contracts doesn’t sound sexy but he will be well compensated for his valuable time. I mean if you can convince someone to buy something that’s defective then pay you to fix it afterwards that’s genius.

[QUOTE=c.captain;141875]There is simply no question left to the conclusion that LCS’s are a failure as a class. Failed concept, failed design, failed construction, failed in operation…AN ABYSMAL TOTAL, COMPLETE, ULTIMATE FAILURE!.[/QUOTE]

Agreed. I’ve been interested in how these new futuristic ship designs have worked out and shake my head at the lack of sea sense in design for a ship intended to go into harm’s way. How the Navy got sold on these vessels should warrant a congressional investigation but unfortunately given the IRS and Bengazi hearings, I won’t hold my breath.

I think I’ve said this before but for my 2 cents, the Coast Guard’s National Security Cutter would have been better bang for the buck and probably only needed minor design modification to meet the Navy’s needs for littoral combat. http://www.wallpapermaven.com/i/miscellaneous/76/Coast-Guard-Cutter-Bertholf-d.jpg. Time will tell but I can only hope that the new super advanced design Zumwalt class destroyer meets expectations.