Fire on the horizon thanks john! 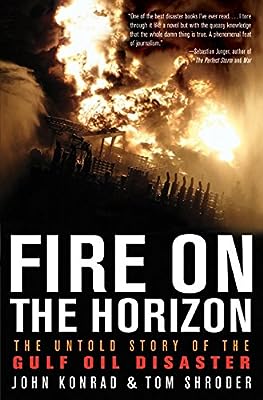 Fire on the Horizon: The Untold Story of the Gulf Oil Disaster

You’re welcome… and I hope you enjoy and find truth in the story, if not let me know…

Thanks, John. There are now at least two copies ordered, and more on the way, I’m sure!

Looking forward to reading it.

Thank you John,
I pre-ordered hardcover last week before coming back to the boat. Now I can get it on Kindle and join in on what is bound to be a very positive and lively discussion.
Looking forward to it,
Shoot31

LOL, Yes, I certainly hope so and I share your optimism but I’m still going to have a case of Alka-Seltzer on hand just in case. Not that there are any major problems with the book (we’ve let most of the primary character review it for errors) but it contains a lot of info and the gCaptain membership is, dare I say, smarter than me… so I’m fairly confident you guys will find [I]something[/I] to call me out on.

I picked up a copy yesterday and could hardly set it down. Just finished a few minutes ago. Very informative book. Brought to light many points many people will never know about events leading up to the Deepwater Horizon going down.

Thanks again for writing the book. I encourage everyone to read it.

And if you want g captain members to call you out on something - spelling mistake pg.261, " walk on his own to feet without the aid of a walker" although your editor should have grabbed that one.

Yeah, I’ve been finding new grammar and spelling mistakes each time I read it. Not sure if this happens with every book but looks like the copy editor (and the writer!) dropped the ball.

But I do appreciate the kind words! And if you have time can I ask a small favor? To copy and paste your thoughts (not the spelling one, of course

) on the books Amazon page. Every review will help get the word out!

You guys are the best,
John

John, just got your book delivered, it is in fort lauderdale and I am in louisiana for the next 2 months,that’s not fair,I will see about getting it shipped out to me

John, I love you man but you really show your ass on this one, I mean you really are an idiot.

What you don’t seem to get is [I][B]no one cares[/B][/I] about the spill anymore, so you’re not going to sell many copies except to us oil-field trash. Few of us ever read books unless they are really good… so you almost got under the radar. Problem is, this book is good. Really good!

So basically you’re fucked. Why? Because it’s good drilling managers [I]will[/I] read it but none of them are ever going to hire a Captain that’s A) smarter than he is or B) who might write his next book about his company! Bye bye career.

John, Thank you very much for writing this fabulous book.Takes courage to speak the truth, in these times of hypocrisy. I shall be proud to share this book with my family,as it reflects an important moment of time in our state, and country’s history, and a respectable tribute to those 11 brave men, who lost their lives.

[LEFT][B]The book describes the mistakes that led to the blow-out and the lives affected by it.[/B][/LEFT]

Fire on the Horizon: The Untold Story of the Gulf Oil Disaster. John Konrad and Tom Shroder. HarperCollins. 270 pages. $27.99. [/LEFT]

[ul]
[li]Photo[B]By Susannah Nesmith[/B][/li][/ul]
[LEFT]The live-streaming video of a hole in the ocean floor gushing oil into the Gulf of Mexico, workers in hazmat suits cleaning tar-fouled beaches, oil-soaked pelicans dying in polluted marshes, shuttered businesses and a docked fishing fleet, the BP chairman wishing aloud he could just get back to his life – the images of last year’s BP oil disaster are stark and hard to forget.
But even after congressional hearings and state and federal investigations, we forget what exactly caused the Deepwater Horizon oil rig to blow. John Konrad, a veteran oil rig captain, and Tom Shroder, former Washington Post editor, endeavor to explain what happened, going step by step through what was done and — most significantly — what was not done in the weeks, days and hours that led up to the explosion. [I]Fire on the Horizon[/I] makes a compelling case that BP and Transocean, owner of the rig, made a series of crucial decisions in an effort to save time and cut costs that directly led to the catastrophe.
Tests that men on the rig wanted to perform were overruled on “the beach” – oil rig terminology for the BP managers directing operations from Houston. BP engineers who developed what they believed was a safe way to seal the well before it blew were told to go back and find a cheaper, faster way.
Maintenance on the aging rig was postponed. A leak discovered in the blow-out preventer — the last-ditch device that ultimately failed to seal the well when it did blow — was determined to be unimportant in February.
“On a huge rig with so many complicated moving parts, these kinds of decisions were constantly being faced. A piece of essential equipment would start wheezing, in one way or another, but it could still be used. To get to the root of the wheeze would be time consuming and expensive and often could grind operations to a halt,” the authors write. They compare the process of keeping the Deepwater Horizon running to driving a car that’s burning oil: “You can put it in the shop and pay to rebuild the engine, or wait until you have more time and money, and in the meantime just keep driving, dump in a quart of oil every time you fill the gas tank, and cross your fingers.”
The book bogs down a bit in the middle with long and detailed explanations of highly technical aspects of off-shore oil drilling, but any credible exploration of the disaster has to look in depth at how off-shore oil rigs are supposed to work.
But [I]Fire on the Horizon [/I]is not just a finger-pointing analysis of a disaster that shouldn’t have happened. It is also the story of the men and a few women who were on the rig that day. Eleven men died and several others suffered lasting injuries in the explosion. Many of those who escaped are scarred in other ways. The authors plumb their memories to weave in the stories of such workers as Doug Brown, chief mechanic, who only realized he was wounded after helping to save injured colleagues. Part of the crew that shepherded the Deepwater Horizon from South Korea, where it was built, into the Gulf almost 10 years earlier, Brown had risen through the ranks early in his career. By the end of 2010, he was signing up for disability payments, battling post traumatic stress syndrome, traumatic brain injury and knee and back problems that doctors couldn’t seem to fix. And he had lost the ability to do the work he loved.
At its best, the book is a fascinating look at a little-understood industry and a fast-paced and emotional story of the efforts to save the Deepwater Horizon. The authors’ account of the workers’ race to save themselves is thrilling and suspenseful, and yet the book is also a sensitive account of the lives forever changed.
Susannah Nesmith is a writer in Miami[/LEFT]

I pre-ordered it and was told it would take 2 weeks to get to me, but then there it was in my box on opening day! Overall a very good book - a little hard to read at some parts regarding the drilling specifics (for me anyway, since I have ZERO background in drilling), but the analogies that John used were helpful and humorous! Read it on a flight down to Atlanta and had to finish it during my layover.

I’ll be reading it a second time to start digesting all the good information in the book.

great book, enjoyed much easy reading John thanks for sending one
Ken

John, finally got around to reading your book. It was third in a pile of new ones when I ordered it. A very good, simple read. Love hearing of the backgrounds of some of those involved. Who they are, where they come from and that they actually have families helps make this tragedy feel more personal. To combine the narrow minded practices of the companies and the details of what happened, and why, in an easily understood format was perfect. To those that haven’t read it, it is a great description of what happened in a non-technical (ie boring) way. BTW, I couldn’t put the book down in the last few chapters which kept me awake well past my bedtime. Thanks for that!

I don’t read much and Fire on the Horizon is the firstbook I’ve read since October. I’m about 25% through the book and I’m really enjoying it.

Enjoyed the book John. I also read two other books concerning the blowout.
FIRE ON THE HORIZON is the best one in my opinion.

I am wondering, could there possibly be a sequel as more facts on the BOP were released after the book was published AND I would bet that investigators and expert witnesses working for the plaintiff and defense teams and sworn testimony from from depositions and trials will likely bring out facts that are closest to the truth versus some of the “testimony” that has been allowed into the record so far.
For instance, testimony by the chief electronics technician about “rubber in the hole” will not likely be allowed in evidence at trial as that is not his area of expertise and is hearsay testimony on his part.

I just finished your book, literally 15 min ago. I really enjoyed it but did get a bit upset with the picture you painted of the GOM oilfield worker. It seemed quite condescending to say that most everyone that works out here is a backwoods redneck that has a barefoot pregnant wife, a four wheeler and loves nothing more than to swill beer and kill fuzzy woodland creatures. (As I stop and look around me) :oOops, my bad!!!

Great book, easy read with just enough tech for the layman to be able to understand.

And I do have to agree with the previous post, YOU ARE SO SCREWED NOW.

Hope you can find a nice Parasail boat to run somewhere.

Just finished reading the book on my lonely tugboat. It was a fantastic book great job!