Evidence that British masters are the most pompous creatures ever!

I mean what merchant ship master (even on a cruise ship) would ever be caught alive in such a getup? This joker looks like he is right out the a production of the “Pirates of Penzance” 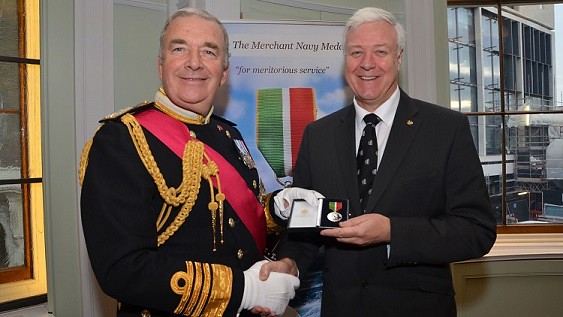 The Confidential Hazardous Incident Reporting Programme (CHIRP) aims to seek out root causes for near misses, identify the lessons learned and to consider how best this information can be used to prevent reoccurrence elsewhere in the maritime industry. CHIRP does not seek to apportion blame to any company or individual.

Rose received the award for mentoring services to Trinity House Yeomen and his CHIRP work into the detection of hazardous incidents at sea. Rose has 45 years of maritime experience to draw on in these roles. 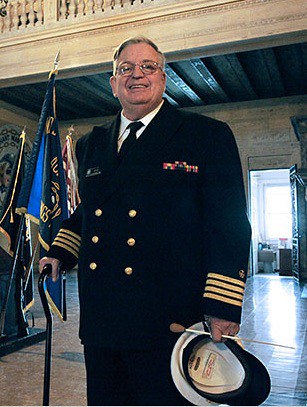 I posted this in the Professional Mariners category to highlight how one does not need to be all dressed up in a clown costume to be a pro and in my book, a real professional is quite the opposite. Unassuming in demeanor or appearance.

Why does KR Force have so many ribbons? He’s not even a real mariner right, just commissioned for working at KP?

I have only been in contact with Brit Masters, who were retired, during internal audits. They were not always that bad. The only thing that bothered me was the shit talking about our cadet training programs.

Now I sailed with a Brit Chief for a couple years. He was a hoot. He was always calling the Mate on watch “Mate of the watch.” So we started calling him…“Chief of the Engineers”

c.captain: Oh, I see. And most sleeves go up to four?

c.captain: Does that mean it’s higher? Is it any higher?

John Rose: Nowhere. Exactly. What we do is, if we need that extra push over the cliff, you know what we do?

c.captain: Put it up to eleven.

c.captain: Why don’t you just make four higher and make three be the top number and make that a little higher?

EDIT: Apparently I misinterpreted the photo and identified the wrong person as John Rose. All the same, I think this is funny so I’m not gonna change it. Deal w/ it.

[QUOTE=c.captain;176032]a real professional is quite the opposite. Unassuming in demeanor or appearance.[/QUOTE]

I know our mythic history, King Arthur’s and Sir Caradoc’s;
I answer hard acrostics, I’ve a pretty taste for paradox,
I quote in elegiacs all the crimes of Heliogabalus,
In conics I can floor peculiarities parabolous;
I can tell undoubted Raphaels from Gerard Dows and Zoffanies,
I know the croaking chorus from The Frogs of Aristophanes!
Then I can hum a fugue of which I’ve heard the music’s din afore,
And whistle all the airs from that infernal nonsense Pinafore.
Then I can write a washing bill in Babylonic cuneiform,
And tell you ev’ry detail of Caractacus’s uniform:c
In short, in matters vegetable, animal, and mineral,
I am the very model of a modern Major-General.

In fact, when I know what is meant by “mamelon” and “ravelin”,
When I can tell at sight a Mauser rifle from a javelin,d
When such affairs as sorties and surprises I’m more wary at,
And when I know precisely what is meant by “commissariat”,
When I have learnt what progress has been made in modern gunnery,
When I know more of tactics than a novice in a nunnery –
In short, when I’ve a smattering of elemental strategy –
You’ll say a better Major-General has never sat a gee.

For my military knowledge, though I’m plucky and adventury,
Has only been brought down to the beginning of the century;
But still, in matters vegetable, animal, and mineral,
I am the very model of a modern Major-General.

The day I become Captain I will get myself one of these:

What else are you supposed to wear when you earn a medal for watching someone “almost” have an accident? 99.9% of mariners probably wouldn’t even show up to get the Near Miss Medal unless you told them the drinks were on the house.

[QUOTE=Sand_Pebble;176057] 99.9% of mariners probably wouldn’t even show up to get the Near Miss Medal unless you told them the drinks were on the house.[/QUOTE]

I’d be in the .1 % that would show up for happy hour discounts.

It’s a confidential medal giving program. You could probably just make some stuff up, send to them & if you win you can go next year dressed up as a pirate.

After a google search it turns out the guy on the right (wearing the suit) is the Captain.

The guy on the left is a Royal Navy Admiral called: Admiral The Right Honourable Lord West of Spithead GCB DSC ADC DUniv

What he is wearing is not too dissimilar to what a US navy admiral would wear.

Here he is here:

Check you facts before posting c.captain

[QUOTE=c.captain;174492]my error…never said I was perfectly right ALL the time, just MOST of the time[/QUOTE]

I really just wanted to leave a smiley but that was to short. It gives you the power to do the Mr. T line.

I wear the same uniform as Watson because he’s such an inspiration to me and he is the greatest mariner to ever sail the seas.

[QUOTE=AHTS Master;176066]I wear the same uniform as Watson because he’s such an inspiration to me and he is the greatest mariner to ever sail the seas.[/QUOTE]

Didn’t watson used to run anchors back in the day?

Didnt you used to run anchors back in the day?

He’s done it all too…