I live very close to, and am a big fan of, the Columbia River Bar Pilots and the Columbia River Pilots. I’ve heard them speak a number of times on local maritime topics of interest in Astoria and elsewhere. The understanding I’ve gotten from that is that they are kind of a chartered monopoly, subject to appointment and licensing by the State of Oregon. Occasionally, I have casually wondered about that because, of course, the Columbia and its estuary are “interstate” waters, but I’ve never heard the State of Washington mentioned in connection with their charter.

Possibly I’ve just missed that point. Certainly Washington has a State Pilot’s Commission just like Oregon, but I sort of wondered if, maybe by agreement, Oregon took the Columbia for regulation and Washington took the Sound and it’s reaches.

But it would seem like the Feds could wiggle into that on the basis of the “interstate commerce” business?? As far as I know, that’s never been an issue here though. (they are, of course, all Coast Guard licensed, unlimited masters). But I really don’t know much about this and am posting this reply more in the hope that somebody does know about the Columbia and might comment and enlighten me.

Oregon took the Columbia for regulation and Washington took the Sound and it’s reaches.

I’m sure that’s exactly it.

The Delaware state pilots do the entire Delaware River, even up river north of Delaware.

But it would seem like the Feds could wiggle into that on the basis of the “interstate commerce” business?

I’m not sure what you mean by that. Are you talking about Federal Pilots?

I’m not sure what you mean by that. Are you talking about Federal Pilots?

I’m not real clear about the term “Federal Pilots” in this discussion. (Having only “piloted” the Columbia Bar in sailing auxiliaries WELL under 100 tons! And that has always been a do-it-yourself operation with the well meaning critique of whatever “after-guard” of fellow sailors you happen to have aboard!).

So I don’t know if this thread is talking about “Federal Pilots” who WORK for the govt. (probably not?) or ones who are chartered/licensed/regulated directly by the Feds (as opposed to my understanding of the present Columbia pilots who are, of course, Coast Guard licensed but chartered and regulated by the State of Oregon.

An interesting historical note: the Columbia River Pilots Commission was actually established by the Oregon Territory in 1846 and thus predates statehood for Oregon! One of the oldest of state government functions!

PS: which would explain the residence of pilot regulation with Oregon, because the Oregon Territory included all of present day Washington State.

ones who are chartered/licensed/regulated directly by the Feds (as opposed to my understanding of the present Columbia pilots who are,

To my knowledge, there is no such thing anywhere in the country. “Federal pilots” is pilots that aren’t “state pilots”.

All pilots must have an MMC endorsed as First Class Pilot, state pilots are required to also have approval from the state government.

Not to overly prolong this discussion, but I’m learning something, so thank you!

My understanding is that this pilotage requirement, for the Bar anyway, can ONLY be fulfilled by a State Licensed Columbia Bar Pilot. Maybe that’s wrong, but, if not, then Federal Pilot’s License notwithstanding, there couldn’t be “Federal” pilots on the Columbia Bar. Not sure if that would apply in the same way to the River pilots…two separate but cooperative organizations.

Federal Pilot’s License notwithstanding, there couldn’t be “Federal” pilots on the Columbia Bar.

I don’t know the specifics of that area but that’s possible. Once the ship crosses the bar though the bar pilots hand it over to river pilots. What those river pilots are required to be depends on whether the ship is foreign flagged or US flagged, and if US flagged whether it’s sailing on register or not.

Federal pilots refer to those mariners who have qualified for the USCG First Class pilots exam for a given area and then can work piloting domestic (coastwise documented) vessels. That is the basic explanation. There are a lot of details I’m leaving out because it gets very complicated very quickly.

The Columbia River and Bar pilots are state pilots who are also licensed by the state of Oregon to pilot vessels in and out of that area. Typically, the stated reason there are not multiple pilot associations operating in a single port, allowing an effective monopoly to occur, is this. The lack of competition for any shipping line’s or shipowners business prevents possible undercutting of standards and safety, which could lead to marine casualties and environmental damage. There have been some exceptions throughout the years, but the idea is to prevent rival associations from cutting each other’s throats to win a rate war. That has historically been why one pilots association has existed in any one geographic area. In the case of the Columbia river, that happened in the state of Oregon before it did in Washington so they got to keep it.

At least that is how I understand it.

Well, one thing for sure: having heard those guys speaking on what it takes for a Columbia Pilot, Bar OR River, to stay current with the ever shifting, silting, shallowing navigation channel, I’m sure there are no “occasional” or itinerant Columbia pilots who drop in for a stint now and then. Dredging the Bar and the main river channel NEVER ceases, so staying in touch with the Corps of Engineers and the working dredges is literally a daily requirement. Add in the weather provided by the Gulf of Alaska and you’ve got a full time job for sure!

Thanks for the comments in response to my questions!

I’m sure there are no “occasional” or itinerant Columbia pilots who drop in for a stint now and then.

Probably not but that’s not the difference between state pilots and federal pilots.

No more so than there are itinerant partners in a law practice or doctors practice. It is a profession that requires high levels of continuing education and study of local conditions. A good harbor pilot can tell you everything that is happening in their port.

Federal pilot organizations exist and all they do, day after day, is pilot vessels in their pilotage waters. They aren’t “occasional” or “itinerant” pilots.

Granted, if a ships officer has pilotage on those waters they could act as a federal pilot but it’s my understanding that that rarely happens outside of industry segments where the same officers are constantly running the same river.

Some companies want their skippers to sit for pilotage and run her on in, but they don’t want to pay any more for the extra risk, so many captains are hesitant to bother with it.

Back in the 80’s/90’s (killed to many brain cells to remember exactly when) Interport tried to take a run at the Sandy Hook Pilots in NY Harbor. Interport did pick up some work but IIRC, some of them ended working for Sandy Hook.

In NY Harbor, The Sandy Hook Pilots bring the ship in from the Sea Buoy but once they are inside a Federally Licensed “Docking Pilot” takes over. These are usually Tug Captains or Mates with the required pilotage and they take the ship to it’s berth and dock it.

Old Joke but “What’s the difference between a Ship Pilot and GOD? Well, GOD knows he’s not a Ship Pilot”!

but once they are inside a Federally Licensed “Docking Pilot” takes over.

I think that distorts the relationship. I would say, once close to the berth a docking pilot takes over.

Depends on if the ship is US flagged or not. US flag ships use Federal pilots in NY, Delaware, and Mississippi River for sure.

Well, it might have changed since my time on “Ship Docking Tugs” but the Docking Pilots had control from Anchorage or in that area if they were underway. They would have control all the way down the Kills to whatever dock they were heading for. Sometimes, a Hook pilot would be onboard but they did nothing until the docking pilot got off. My Company was one of the big three in NYH and we did our fair share of ship escorting/docking. How many Docking Tugs have you sailed on?

How many Docking Tugs have you sailed on?

I used to dock ships in Philadelphia harbor.

They would have control all the way down the Kills to whatever dock they were heading for.

If it’s a narrow waterway where the ship is under tug control, like on the Schuylkill River in Philly, then the docking pilot would normally be in control.

Sometimes, a Hook pilot would be onboard but they did nothing until the docking pilot got off.

I expect that a state pilot is legally required to be onboard.

I wasn’t arguing specifics of Sandy Hook, I just thought that you’re statement would give people the impression that in general state pilots just bring the ship in the mouth of the river then “once inside” a docking pilot takes over. If the harbor is small enough that could literally be what happens but I don’t want people to think that’s necessarily how it works.

there is a good book out (fairly recent) written by a pilot down in San Fran and that area that was pretty good… sorry but i can’t recall the name of it right now but one could probably find it. It was pretty good. 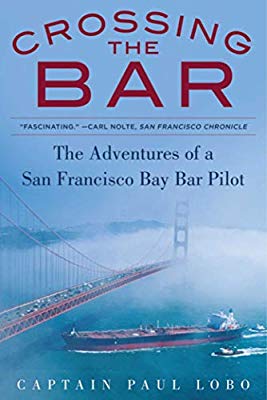 Crossing the Bar: The Adventures of a San Francisco Bay Bar Pilot