Surprised this hasn’t been posted yet.

I know a few guys out there on the PrePo ships and they sent this to me.

WILLIE Carnell Frink, a steward supervisor of a maritime prepositioning ship, has been arrested after he was accused of sexually assaulting a female crewmember.

On Monday, Frink, 40, appeared before Superior Court Associate Judge Joseph N. Camacho who imposed a $50,000 cash bail on the defendant.

Frink was charged with one count of sexual assault in the first degree. He was represented by Assistant Public Defender Tyler Scott while Assistant Attorney General Frances Demapan appeared for the government.

After the hearing, Frink was remanded to the custody of the Department of Corrections and was ordered to return to court on Nov. 23, at 10 a.m. for a preliminary hearing, and on Nov. 28 at 9 a.m. for an arraignment.

According to the complaint, the victim told police that she and Frink are co-workers and that he was her supervisor.

According to the victim, Frink told her that he rented a room at another hotel where they could hang out together.

She said while swimming, she and Frink drank alcoholic beverages in the pool bar area.

She told investigators that because it was happy hour, Frink bought her rum and Coke. After the second drink she said she started feeling very dizzy, nauseous, and shaky.

She said she was not feeling good when they went to the hotel room that Frink rented. She said she took a shower and while in the bathroom she threw up and later sat down on the bed due to dizziness.

Frink, she said, offered her a massage. She said she was hesitant to oblige, although Frink’s hands were already on her shoulders. She said she shrugged Frink off, but he laid her down against the bed and started rubbing her back with lotion.

She said she tried to squirm away, but Frink held her back down and told her to “just relax.” The victim said at that point she was feeling very confused.

She said she began to black out and “all of a sudden Frink was having sexual intercourse with her without her consent.”

That was a tough read. What a creep

Sounds like a chapter out of a Bill Cosby playbook.

That should read WILLIE CARNAL FINK.

Post the update, The lead detective intentionally omitted evidence that supported the arrest warrant. I think the case has been tossed.

Since you know about it, why don’t you post it?

That is a very serious accusation, you should take your proof of that and present it to the appropriate authorities.

I know about it because I read an update on another site.

No accusation on my part at all. This story was shared on another site and the update was shared by the accused. Based on the update the case was thrown out and he has been released. I don’t have access to any official accounts so I am not in a position to provide an update.

So, “it’s true 'cuz I read in on the internet.” Sounds credible…

So post the damn thing? You’re not even telling us what the “other site” is so how are we gonna corroborate this?

I read ALL of this on the internet. Your point?

Go find it LOL No really, It’s on $ailor Gang on Facebook. I’m not copying and pasting that story. According to the accused, he obtained legal representation and was released the day before Thanksgiving. “wrongfully arrested on an intentionally deceptive warrant” 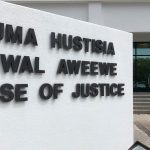 The Superior Court has imposed a $50,000 cash bail on a man accused of sexually assaulting a fellow crewmember on the maritime ship they both work on.

I’m not a member of sailor gang, why won’t you just post the link?

Wouldn’t do any good if he did – you have to join the group to see any content. 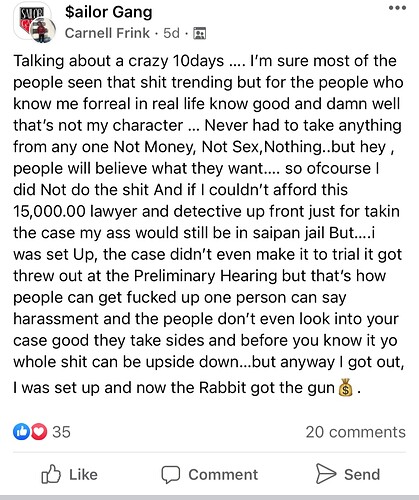