Brexit is Brexit no matter what

Contraband people have been ready as far back as the first Brexit announcement, if not before.

Only legal stuff gets regulated.

Sounds like they managed to agree on a deal that will please everybody, except the millions on both sides that think it is a “sell-out”: 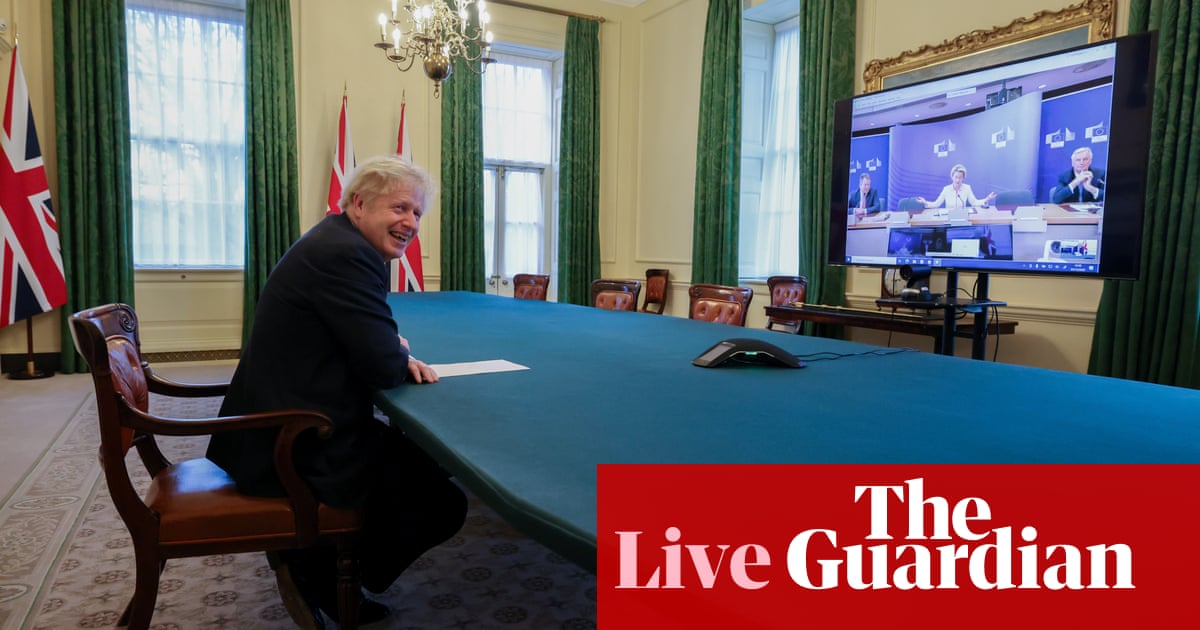 Ursula von der Leyen says ‘it is time to leave Brexit behind’; Labour will back deal when parliament returns next week, says Keir Starmer

The British fishing industry is not celebrating the Brexit agreement, which it believes does not sufficiently cut EU fishing quotas and access to British waters.

Then it is done and dusted. UK is an “Independent Nation” once again. The can now decide for themselves about their own future:

Brexit: New era for UK as it completes separation from European Union

Boris Johnson celebrates the "freedom in our hands" as the long Brexit process comes to a conclusion.

Congrats, best wishes, and a Happy New Year to our friends in the UK.

UK was running a trade deficit with the Eu in goods, so the EU needs the UK.
The were making their money in services like Banking and Insurance.

The things that changed for Brits trading, traveling, living and doing financial transaction in EU after 01.Jan. 2021:

What will be different about the UK's relationship with the EU from 1 January 2021?

What changed for EU citizens? Not much, since very little part of EUs foreign trade is with UK (excl. NI) and relatively few EU citizens travel to, or live in the UK. (In % of total trade, travel, financial activity)

the UK was the largest single market for German cars, I think they will notice that if they cant keep shipping them to the UK

Cars are only a small part of EUs export to UK. There are also cars going the other way.
Only 4% of EU export goes to UK, while 47% of UK export goes to the EU:

According to figures by an Institute evaluation of trade, the EU's share of UK trade is much larger than the other way around.

Maybe some facts and figures about the Automotive Industry is worth looking at:

BTW; Trade between UK and EU will not stop because of Brexit, just get more expensive and complicated. The Trade deal will alleviate the cost and complication somewhat though.

PS> The biggest UK “export” to EU is financial services, which is not covered in the deal
.

It may take awhile to round off the rough edges, but I think the UK is going to do fine. So is the EU.

the EU is a basket case, they joined their currencies together to prevent the first one from failing and to reign in Germany and stop its currency from skyrocketing and allowed them to loan money to everyone.

geez bugge’
talk about using statistics to further your argument.
You are comparing the UK economy in percentage terms to the whole EU.

About 1 in 7 German cars are sold in the UK

Geez!!! You know that UK has broken away from EU, not from Germany??
They left the EU Internal Market and Customs Union at 2300 hrs. GMT on 31. Dec. 2020.
Well almost. England and Wales did, but Northern Ireland is still within and Scotland is preparing to break away from the UK and rejoin EU:

Scottish First Minister Nicola Sturgeon, whose ambition it is to take an independent Scotland back into the EU, tweeted: “Scotland will be back soon, Europe. Keep the light on.”

The Make it British list of British-made cars
With one exception:

Morgan 4/4 Two Seater
Morgan – The only entirely British-owned and British-made car company on the list. Only a few hundred cars are made every year at their factory in Malvern, Worcester, hence the waiting list for a Morgan can be up to 2 years. They’ve been making the Morgan 4/4, shown above, since 1936 and it holds the world record for being the model of car with the longest continuous production.

If the supply chain becomes too much affected by Brexit, some may move their assembly plants to an EU country

It happened soon after the result of the referendum was announced. This has given 4 years to many companies to adjust.

relatively few EU citizens travel to, or live in the UK.

Almost 4 million of them have registered to be settled in the UK, and the others still have another 5-6 months to register.
Latest figures from UK government show just under 800,000 UK citizens living in the 27 EU countries.

The actual number of EU citizen in UK is 3.6 Mill.:

How many EU citizens live in the UK? | UK in a changing Europe

According to the Migration Observatory, 3.6 million EU citizens lived in the UK in 2018. This includes children born in the UK.

The actual number of Brits living in EU countries are 1.3 Mill.:
How many British citizens live in the EU? | UK in a changing Europe.

How these figures will change in the years to come is left to be seen.
One thing is for sure: it will be more difficult to travel, work and live wherever you want in Europe for Brits and probably less EU/EEA citizens will go to UK for the same reasons.

Who will be the biggest losers?? Your guess is as good as mine.
Probably young Brits that have less freedom to travel and less opportunities for work in the much bigger EU market. (Seasonal work in the UK’s agricultural sector may not appeal to them)

So what was BREXIT all about? Just fill and hand in your custom declarations and book your transport in good time and there should be no problems at all to pass the border with a passport. It is just paper work. And if you happen to need a permit to work and live for it, just do the extra paper work again. But the fish? Yes, the fish has a problem. British fish can only be caught by British fishermen with their papers in order. So I will only eat European fish from now on. Or Norwegian salmon. But the students? They can study from home!

geez, you divert conversations like you dont understand them at all.
The UK is a huge market for German cars, Germany will notice that loss if thats what happens.
UK trade has been falling with the the EU over a long period and growing with the rest of the world.
The French have been traveling to the UK in increasing numbers for years to work as they know France is stuffed.
The French and Germans have been trying to drag banking out of the UK for years but the customers clearly prefer the UK.
The story has been the same since the Euro was floated, they said thats the end of the square mile in London, lol, it just made those eu losers more jealous when nothing changed.