Any recent news on Ever Forward grounding?

So was a cause Ever Determined for this grounding?

According to Sal Mercogliano it’s not being investigated. Sounds more than a bit fishy (or in MD, crabby).

AFAIK the pilot screwed up, I never heard anything about the ship losing steerage, dodging crab boats, or anything else that wasn’t human error.

I wonder how many cartons of Marlboros it took to calm the investigative waters.

Plus I wonder if Maryland ever got the millions of dollars they wanted to make up for crabs having PTSD issues or whatever they were suing for?

I have experienced the loss of the rudder indicator entering the Yarra River in the port of Melbourne. I can confirm that it is very hard to steer when you don’t know where the rudder is. Switched to autopilot which has its own pick up and control was restored.

run an engineer to the steering gear room !!

In the vernacular- toot sweet. The immediate problem is the river Yarra is quite narrow and we needed to regain steering immediately if not sooner.

“The report also finds the pilot, identified by the state of Maryland as Captain Steven Germac, was repeatedly on his cell phone throughout the trip out of the Port of Baltimore. The report reads, “Pilot 1 also made a series of five phone calls amounting to over 60 minutes of time during the course of his outbound transit. He also sent two text messages and began drafting an email immediately before the grounding occurred regarding issues he experienced with facility line handlers.” 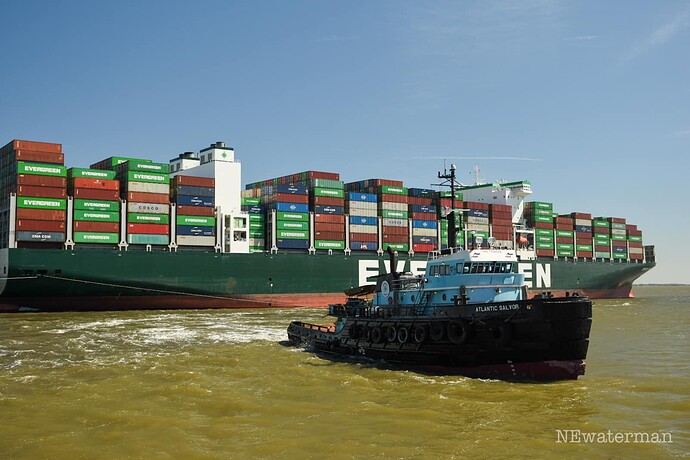 The Bay pilot who was operating the container ship MV Ever Forward when it ran aground has had his license suspended as the Coast Guard releases its investigation report into the grounding.

Months of time have passed since Ever Forward’s grounding and the recent USCG findings of fact supporting multiple causes of the event. Imagine the thoughts the third mate (cadet) and AB helmsman may have conveyed to the pilot about the position of the ship prior to its running into the mud. Bridge Team Management, or Bridge Resource Management, or whatever you want to call it has really never been a thing, to use a present day USA vernacular. But had it been employed in this instance, it very well might have led to a different outcome. What does it take for a person on a vessel bridge to “step up to the plate” and shout at a pilot, or master, or some other senior bridge officer to be aware that something is amiss and about to get even worse in a very compressed time frame?

For that to happen, a senior bridge officer first has to be present to be aware that something is amiss.

In response to New 3M’s post - you are correct, however, according to the USCG findings, the ship’s 3rd Mate (senior to the cadet) was on the bridge at the time of the grounding. My point was to illustrate that if the navigation of the vessel was to be questioned or challenged by either the cadet or helmsman, or the 3rd mate, those concerns may have been given diminished consideration by the pilot, or in other words… not considered, at all.

You’re going to be hard-pressed to find a fairly junior 3M (especially a Chinese one) to use more than passive prompts in a challenge against an American pilot. Indeed, the 3M did attempt to do so (stating the current heading order multiple times) to no avail.

I hate to knock on him, but this pilot didn’t merely have the bad luck of a momentary lack of judgment or a bunch of other factors stacked against him - he was clearly not 100% focused on the safe navigation of a very large vessel in a buoyed channel (including making a 55 minute phone call). Christ, he even asserted to the USCG investigator that he “found the navigational buoys to be unhelpful.”

The Bay pilot who was operating the container ship MV Ever Forward when it ran aground has had his license suspended as the Coast Guard releases its investigation report into the grounding.

“4.2.21. On April 27, 2021, Pilot 1 was involved in the grounding of the motor vessel TIRRANNA, a 760-foot long, Roll-on Roll-off cargo ship in the vicinity of York Spit Channel in the Chesapeake Bay. The Coast Guard Incident Investigation Activity (IIA #: 7184634), completed by Sector Virginia, determined the initiating event was the failure of the steering control relay. This was followed by the eventual loss of steering and vessel grounding.”

Tough year for this guy.

With a clear picture of the situation, backed up by cell phone and text data, gross negligence could likely be proven. Potential court case could be enormous. Salvage expense, loss of vessel use for months. Claims paid by 3rd party insurance delayed and spoiled cargo.

Pilot associations generally well protected against lawsuits, this case extreme. Does the association monitor pilot cell usage, other pilots corresponding with pilot #1 while he was on the job. Admitting using one method to fix position ignoring vessels systems. Then shutting pilot system down to send non related text.

For that to happen, a senior bridge officer first has to be present to be aware that something is amiss.

I don’t drive ships for a living, but I have an iphone/ipad that can quickly tell me if I’m in the channel or heading outside it.

I believe ships have some fancy machine called ECDIS that precisely places the ships location. And of course everybody has eyes and can look out the window.

The real truth is “bridge/engine resource management” is all a bunch of feel good powerpoint bullshit. The underlying concepts, like airlines’ CRM are completely valid. But no company has or will ever do what is required to fully implement a system that requires the first step to admit humans are flawed and will make wrong decisions.

CRM works and airlines are so safe because it’s taking nearly all of the decision making away from the humans and created a system to follow. Airline captain doesn’t have to choose whether he can attempt to land in fog at destination airport, there are set standard minimums; if they aren’t met, hold for weather to clear or go to alternate.

Additionally, pilot associations always tell us that they need a monopoly to ensure public safety. How does a monopoly create a more safe environment?

A few comments on the report if I may.

Way back when we were discussing this incident I felt that it was attributable to fatigue. Clearly this was not the case although parallels can be drawn between significant distraction devolving situational awareness and fatigue.

Sadly, this Pilot is now not in a good position. I applaud the USCG on the report as lessons will be learnt and changes enacted.

How does a monopoly create a more safe environment?

Pilot associations make important safety decisions about their ports. For example: how far up their channel can a large tanker proceed, how many tugs does a certain job require or when has visibility deteriorated to the point of going to one way traffic or even shut down - to name just a few. There is constant pressure to make exceptions and to remove restrictions. The Coast Guard lacks the experience and training to make those determinations.

If there is competition that gets thrown out the window.