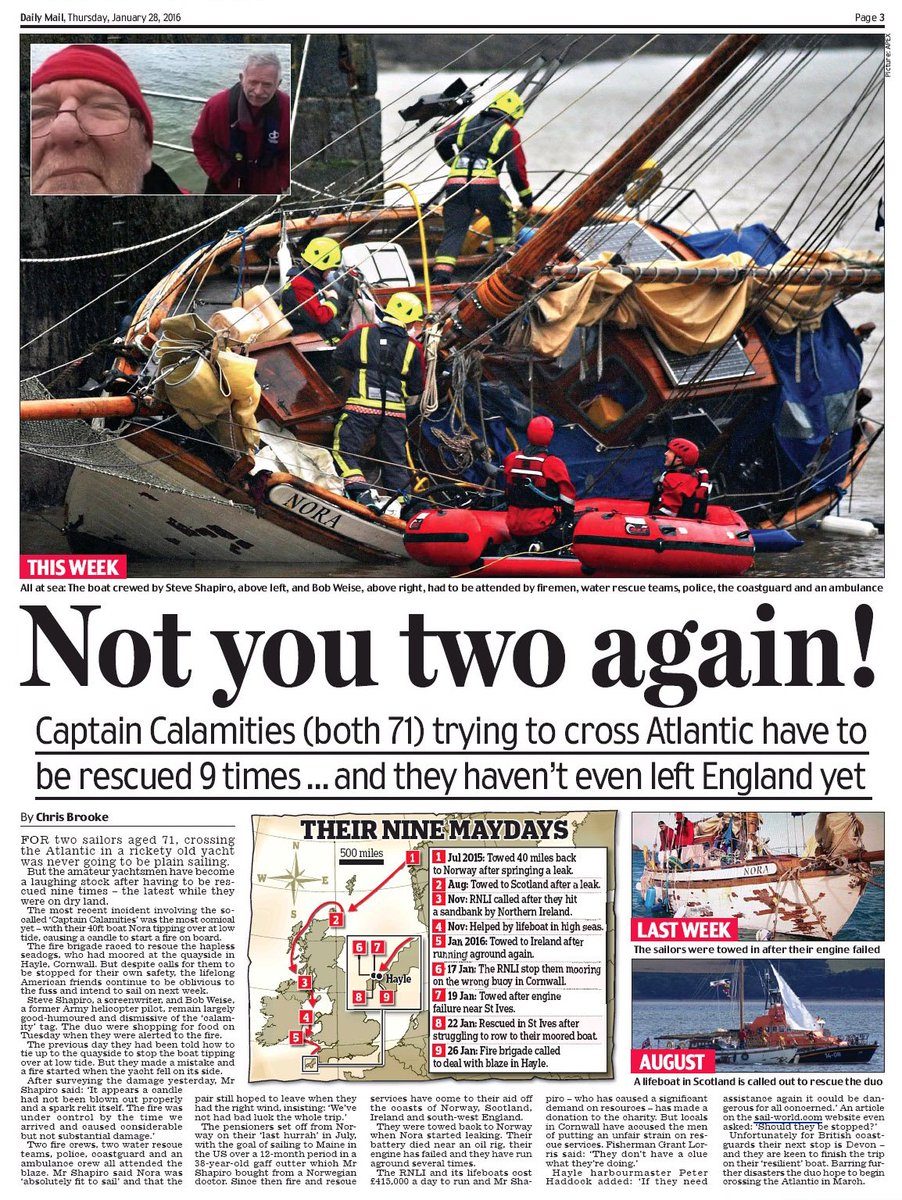 LONDON — A hapless American sailor who has been rescued nine times while trying to cross the Atlantic has admitted he is on the verge of finally quitting his calamitous voyage.

Steve Shapiro, a 71-year-old screenwriter from Pebble Beach, California, bought the 44-foot “Nora” in Norway in July. He planned to sail the yacht all the way to Maine by August.

But the expedition home has been marred by mishap after mishap.

Shapiro, along with his 71-year-old sailing partner Bob Weise, has required help from emergency crews in Norway, Denmark, Ireland and the U.K.

The wayward sailors have been met with particular fury in Britain, where rescues were conducted by the Royal National Lifeboat Institution (RNLI), a charity that spends thousands of dollars on each mission and relies on public donations to stay afloat.

The U.K. press dubbed Shapiro and Weise “Captain Calamities” — and legendary British sailor Sir Robin Knox-Johnston told them to “get the hell out of our waters.”

Still stranded in Hayle, a picturesque harbor in southwest England, Shapiro told NBC News he faces a $14,000 repair bill and claims he is close to quitting.

Shapiro added: “A lot of things need fixing and I’m not sure if I’m willing to put in the costs to solve it.”

He summed up the attempted voyage as a “small disaster.”

Nora is a 18-ton gaff cutter that was built in 1979 based on a design from 1839. Shapiro admits that, aside from its mechanical problems, the boat has also seen better days cosmetically and is dire need of a lick of paint.

He found Nora for sale on the Internet and, while declining to say how much he paid for the vessel, claimed his pre-purchase checks revealed nothing to suggest she would struggle to make it to the East Coast of the U.S.

Yet just one day after setting off in July, they sailed over a fishing line in the squally North Sea that damaged the boat so badly it lost all power.

They were forced to issue a distress call and had to be rescued by Norwegian officials in what Shapiro called a “life-saving operation.”

Assistance was required again off Denmark, Scotland and Ireland — although Shapiro disputes the seriousness of that incident — and several times while in the U.K., where he has been stranded since August.

The most recent incident happened last month at Hayle Harbour. The pair left a candle burning on board while they went ashore shopping for food. The low tide caused the vessel to tilt dramatically and the candle slid and set fire to some clothes, prompting their ninth emergency call-out.

The blaze was met with a verbal tirade from Sir Robin Knox-Johnston, who in 1969 made sailing history when he became the first person to circumnavigate the globe single-handedly without stopping.

“This is no longer a joke — this is getting very serious,” the veteran sailor told the BBC. “They don’t seem to realize it costs money every time they are rescued.”

“These guys are costing the RNLI a fortune,” he added. “They need to show a greater sense of responsibility and frankly either pack it in or, I hate to say it, get the hell out of our waters as soon as possible.”

Shapiro called Sir Robin a “wonderful man … a remarkable man” and told NBC News he has “great respect for what he has done, traveling around the world.”

But he added he was “surprised [Sir Robin] would make such remarks having done no research about me or my boat.”

Shapiro said he has made “wonderful” friends while stranded in Hayle and that people’s personal reactions have been far more sympathetic than the ensuing media frenzy.

According to Shapiro, Weise has since decided to return home because his family was concerned for his safety following the negative press coverage.

“He had his reasons and I had mine,” Shapiro said, conceding that he may also follow suit. “It may not be the right boat for me.”

SIR, let me say that you are also not a “serious” sailor but rather more of a “menace”!

Let’s say it all together now:

well, to be fair!.. maybe we all have a last quest before we pack it in? 71 may not be too old though it looks like a lot of boat? I hope they find something more manageable to do, for going home to ‘retire’ in defeat with all this bad press sure can’t be good for the self image.
in fact, if i were 91 I think I’d rather of just ‘dis-appeared’ a ‘hero’ than suffer what they’re going thru.