After Takeover of Union Local, a Rebellion in the Tugboat Ranks

After Takeover of Union Local, a Rebellion in the Tugboat Ranks 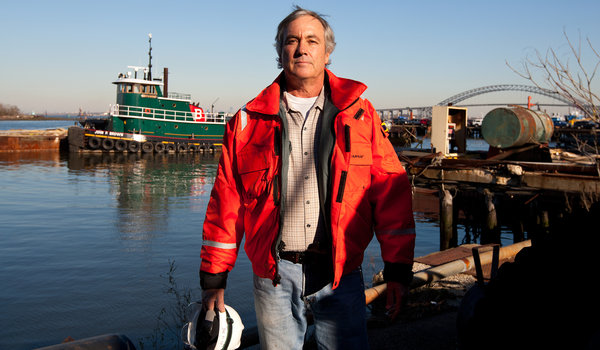 Ruth Fremson/The New York Times
“It’s nothing less than the hijacking of our local,” said Joe Dady, a tugboat captain, who has complained to federal officials.

In October, however, the key was taken away: officials of the parent union placed the 1,700-member Local 333 under trusteeship. The reason, officials said, was that the local’s elected officers had failed to prevent a major theft of money. But Mr. Dady and others claim the trusteeship is simply a power play mounted by disgruntled former officials defeated in recent elections. “It’s nothing less than the hijacking of our local,” said Mr. Dady, who has complained to the federal Labor Department that the trusteeship is improper.
Whatever its cause, therein lies a long and complicated mariner’s tale that is now being bounced about in angry e-mails and radio transmissions among tugs and ferries from Sandy Hook, N.J., to Maine.
The trusteeship has set off a rare rebellion in the ranks at the local’s largest employer, K-Sea Transportation. There, more than a third of the 300 unionized employees filed a petition with theNational Labor Relations Board seeking to decertify Local 333 as their bargaining agent and to form an independent union, named the Richmond Terrace Bargaining Group after the area on Staten Island where many local tug firms are based.
Among those helping to spark the breakaway is George Remington, a chief mate known as Skip, who has urged on fellow rebels in a series of e-mail blasts (his address is Buoyhead88). In an e-mail last week, Mr. Remington wrote that the new union “gives us a chance to build something that we as mariners and co-workers can be proud of. Something we can build with our own hands.” Members of the local, who are scattered up and down the Eastern Seaboard, will vote by mail on the new union, with a ballot count scheduled for Feb. 10.
Todd Santos, an engineer on an oceangoing K-Sea tug, said he supported the breakaway. “There is no Local 333 right now,” he said. “We’re decent hard-working people and are kind of tired of being treated as the red-haired stepchild in the room.”
William Hennessey, the secretary-treasurer of the United Marine Division, who imposed the trusteeship, said union politics were not involved. He said he acted because local officials were asleep at the helm while a crooked financial adviser stole $1.2 million from a members’ pension account. The adviser, Carlo Chiaese, a New Jersey stockbroker, admitted using that fund and others for a shopping spree that included a Porsche 911 Carrera, a Land Rover, country club fees, and vacations in the Virgin Islands. He was sentenced in August to nearly five years in federal prison.
Local 333’s ousted president, William Harrigan, said that hiring Mr. Chiaese had been “a terrible mistake.” But, he said, he was not the only one taken in by him. The fund’s accountant and lawyer also failed to spot the thefts, he said. Both Mr. Hennessey and Joseph D. McCann, a former federal prosecutor and the trustee overseeing the local, agreed that none of the local’s officers were involved in the scheme and that no corruption had been found. “There is not even a hint of that,” Mr. Hennessey said.
The problem, he added, was “the fiduciary lapse.”
“If I didn’t do the trusteeship,” he continued, “I might have been in trouble. Somebody could have brought charges against me for not doing my own fiduciary responsibility.”
Members noted that the longshoremen’s union was not known for cracking down on misconduct. The only other trusteeship imposed by the union is in place on a Newark dockworkers’ local long linked to the mob. There, the union acted only after the local’s top officers were arrested on extortion charges. The International Longshoremen’s Association itself remains the target of a long-pending federal civil racketeering lawsuit. Filed in Brooklyn in 2005, it accuses the union of being under the Mafia’s influence.
Local 333’s own troubles have long smacked more of civil war than mob war. A bitter yearlong strike in 1988 resulted in the loss of pensions and jobs after employers hired replacement workers. “The I.L.A. left us twisting in the wind back then,” said Mr. Dady, who was out of a job for three years because he refused to work alongside those hired during the strike.
In 2008, Mr. Harrigan narrowly won election on a platform vowing to restore the local’s clout via democratic reforms and expanded organizing of the growing number of nonunion operators in the harbor. The incumbent he defeated was John Healy, a powerful $134,000-a-year I.L.A. vice president who also heads the union’s semi-autonomous United Marine Division. Mr. Healy challenged the results, but was defeated by a large margin by Mr. Harrigan in a rerun.
At the marine division, Mr. Healy started a new unit, Local 350, with himself and Mr. Hennessey as officers, to compete with Local 333. In its most recent filing, the new local claimed just three members. “It’s still infantile,” Mr. Hennessey said. In February, Mr. Healy challenged Mr. Harrigan for the Local 333 presidency, but was defeated, 3 to 1.
A few weeks later, Chris Larsen, an ally of Mr. Healy’s who is also an officer of the marine division, filed internal union charges that Mr. Harrigan had ignored rules that might have prevented the pension fund thefts. A hearing by the longshoremen’s association found “a disturbing pattern of gross negligence” but left it up to the marine division leaders to decide what to do.
Mr. Healy and Mr. Larsen abstained from voting on the future of the local, leaving its fate up to the only other officers, Mr. Hennessey and his brother Harry, who head a local representing Long Island municipal workers. “We both voted for trusteeship,” Mr. Hennessey said.
He said the members at K-Sea trying to break away from the local were making a big mistake. “I think it just plays into the company’s hands,” he said.
Mr. Dady, who works for a different employer, shared that concern but said the fault was with the longshoremen’s association’s heavy-handed tactics with the local. “We should be out dealing with this nonunion labor coming to town and taking our jobs,” he said. “Instead we are fighting among ourselves.”