A fascinating map of the most spoken languages in every US state besides...

The United States has never had a single “official” language. While English is broadly accepted accepted as the common tongue and typically used in schooling as well as government docum… 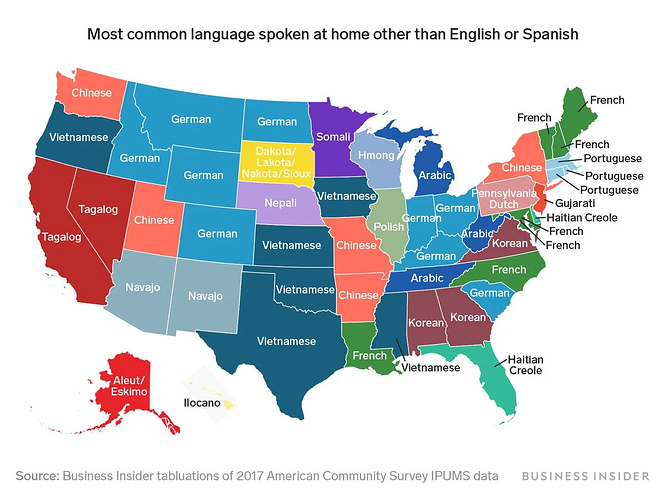 About half the kids that I went to school with in Central Maine spoke French at home.

America’s history from the trail of tears to the war on terror.

I sailed with at least one Maineiac who didn’t start speaking English until he started school.

There is a bit of history there;

Although the Ku Klux Klan is most often associated with white supremacy, the revived Klan of the 1920s was also anti-Catholic. In the U.S. state of Maine, with a negligible African-American population but a burgeoning number of French-Canadian and Irish immigrants, the Klan revival of the 1920s was mainly a Protestant nativist movement directed against the Catholic minority. For a period in the mid-1920s, the Klan captured elements of the Maine Republican Party, even helping to elect a governor, ...

The Klan tapped into a long history of fraught relations between Maine’s Protestant ‘Yankee’ population (those descended from the original English colonials) and Irish-Catholic newcomers, who had begun immigrating in large numbers in the 1830s. The rise of the Know-Nothing Party in the 1850s had resulted in the burning of a Catholic church in Bath, Maine, and the tarring and feathering of a Catholic priest, Father John Bapst, in Ellsworth. Catholic complaints about Protestant-oriented public schools had helped motivate the mob that attacked Bapst. The main front in the war on immigrants before the American Civil War, however, was temperance legislation. The Maine law of 1851 was the first statewide prohibition ordinance in the country, and was perceived by Maine’s Irish-Catholic population as an attack on their culture. With the growing influence of Democratic Irish-Catholic and French-Canadian municipal politicians in cities like Bangor, Lewiston, and Portland, ethnicity and religion increasingly helped to draw party lines.[1]

John Gould said to the effect of “Maine has a long tradition of voting dry and drinking wet”.