Why you don't take little boats into heavy pack ice

thanks to Tim Konrad for posting this 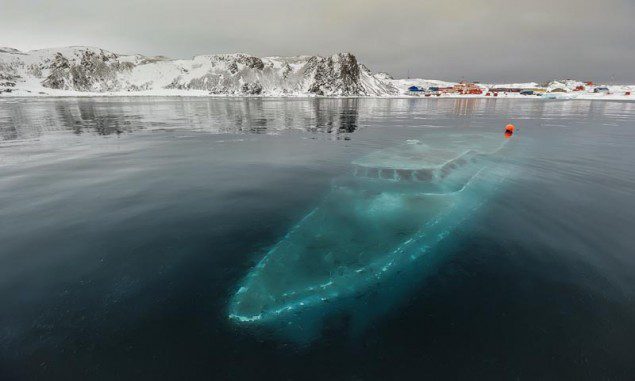 twistedsifter.com: In this haunting image by Ruslan Eliseev, we see the sunken remains of the 76-ft Mar Sem Fin, a Brazilian boat that was used for scientific and educational expeditions. The boat, which sunk on April 7, 2012, lies at a depth of about 9 meters (30 ft) in Ardley Bay, Antarctica. Thankfully the crew was completely evacuated and nobody was hurt. For a blog post that documents the actual sinking of the ship, check out this blog (in Russian)

here’s a couple of pics from the blog mentioned showing the conditions at the time of the sinking:

WHAT THE FUCK WERE THEY THINKING! Look at the stern in the first pic…what flag do you see? That answers the question!

Insurance fruad…that would be my guess.

BTW is that the “Palmer” I see off in the distance of the one pic the little boat after it sunk?

Can’t make out the flag…which one is it?

Maybe they saw some Jap whalers and had to rush out to harass them consequences be damned. I would have been nervous bein on the Palmerin that mess.

Here for only 20k per person 6 min. You could sail on her, well not now. I still say insurance fraud. Cause NOBODY* could be that stupid. I keep seeing reports of 4 rescued.

Brazil where the men are complete idiots and assholes at the same time. What an effing combination!

A cabin with a bathroom for the crew.

Three cabins for passengers with complete bathroom each.

The main cabin has a double bed. The other two cabins have two bunks each.

You will also find a living room, a kitchen, a toilet, a sundeck or aft deck on the boat.

A 15-foot supporting boat with a 25hp motor.

Breakfast, lunch and dinner on board.

IT WAS A FUCKING ALUMINUM BOAT IN ANTARCTICA! SOMEBODY NEEDS TO GO TO PRISON!

Glad I am not the only one who thinks so!

BTW is that the “Palmer” I see off in the distance of the one pic the little boat after it sunk?

No, that looks to be on the beach whatever it is but the colors are about right.

btw, wanted to give you a gold start for an excellent use of the term “effing” in the perfect spelling and context. Your studies are coming along quite well and soon you will have earned your “effing” diploma!

new classes for using the term “effing” being formed now…reserve your “effing” seat before they’re all “effing” filled!

Good luck with that insurance claim. Hope it was commercially registered and crewed for starters … Somebody may have effed up (if that is an allowed correct usage) !

[QUOTE=Rebel_Rider1969;76241]I still say insurance fraud. Cause NOBODY* could be that stupid.[/QUOTE]

The only thing you got right is that the crew is not that stupid, the operators of that boat live and work in the region where this happened, they know the area. Sea ice like that shown in the pictures can blow in very rapidly, ask anyone who has worked in the Bering, especially around the Pribilofs.

Sometimes a boat just happens to be in the wrong place at the wrong time and maybe this was one of those times … it could even happen to you if you keep your “expert” opinions to yourself and last long enough.