Why does the National Review want to part out the U.S 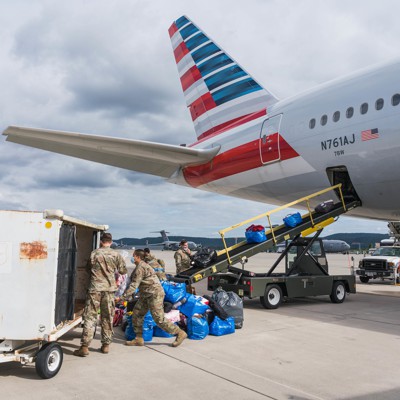 Last year’s massive Afghanistan evacuation could be a trial for how the military moves troops and equipment around the future battlefield. 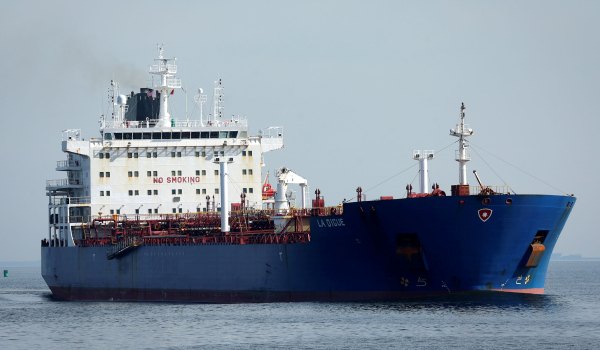 Americans need federal policy-makers to repeal the Jones Act now more than ever.

Why do they want to do anything? $$$$ for the right people

It’s behind a paywall. No way am I going to subsidize that bunch of neo-fascists.

You read the title, so you know

Why bother posting links to articles that are behind pay walls?

Why not copy and paste the article?

The shipping bottlenecks and the crisis with container rates jumping 10 times in cost taught America a lesson about self-sufficiency.

Unfortunately, that lesson has already been forgotten!

The shipping bottlenecks an crisis with container rates jumping 10 times taught America a lesson about self-sufficiency.

Didn’t the few US-flag container ship that exist charge the same high rates as the others did?

BTW: Shipping is an international business, nothing is stopping you from buying or building container ships abroad, flag them US and start carrying containers across the Pacific, or Atlantic. You may even charge lower rates, if you so please.

Why does the self proclaimed conservative opinion publication The National Review want to get rid of the Jones Act & part out the US? To undermine & destroy the US as we know it of course. To undermine & destroy the US is the same reason why many national liberal politicians & publications want to have open borders with Central & South America, Africa & the Middle East. The weekend before last the border patrol made contact with over six thousand refugees/immigrants in 1 city alone (McAllen, TX). So how can both the liberals & conservatives want to undermine & destroy the US? The answer is they don’t. IMO, it globalist oligarchs who knows how to play both sides against one another. They want to get rid of the Jones Act, civil liberties, personal freedoms & to have open borders to increase their power & wealth. So by all means, liberals should do the work for the globalists & blame conservatives for wanting to get rid of the Jones Act, ignore our overflowing open borders & the conservatives should use their assigned talking points to attack liberals in the same manner.

First off the U.S. borders are not open, nort even close, secondly, get your partisan blinders off.

Are we on the same planet?

I didn’t know how to reply to him. And then he accuses me of having partisan blinders? Spanish is the most spoken language in my home & half of our friends are immigrants (legal & otherwise). Pretty much everyone I know, Democrat, Republican & independent agrees the border is open. Im not going to try to discuss with him because it is apparent he has a one way, far left paradigm. Conservative opinion publication National Review bad.

I like Ombugge. I really do. He posts a lot of good maritime info, but politically he is an anti-American squat-to-pee Jesper Berg.

First off the U.S. borders are not open, nort even close, secondly, get your partisan blinders off.

Kamela Harris, the highly accomplished and well spoken Vice President of the country and president Biden’s designated border czar categorically states that the border is secure so that proves you’re right.

Oh sorry, did I post some obvious but unwanted facts again?

‘Our financial performance in the China service was the primary driver of the increase in consolidated operating income year-over-year,’ said chief executive Matt Cox.
Matson’s first-quarter container volume in China increased 218.6% year-on-year primarily due to volume from the firm’s express CLX+ and CLX services.
Source (behind paywall): https://lloydslist.maritimeintelligence.informa.com/LL1136604/Matson-boosted-in-first-quarter-by-buoyant-transpacific-trade 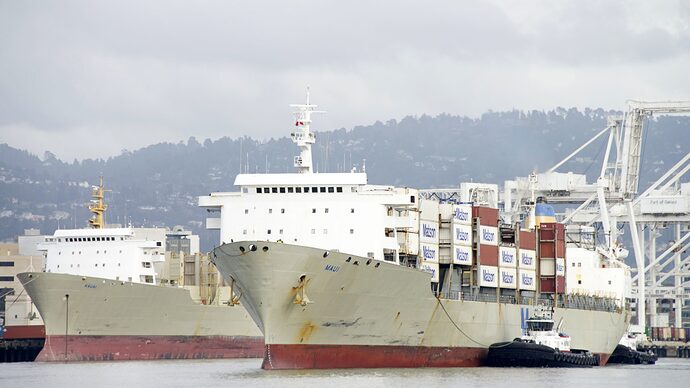 US domestic and transpacific carrier Matson says it expects the elevated demand for its express sailings from China to continue “most of the year”, as shippers look for reliability in their supply chains. Matson chairman and CEO Matt Cox says the... 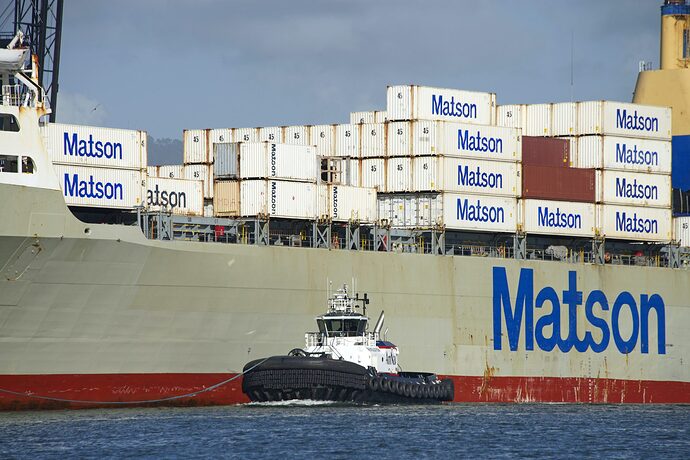 By Mike Wackett (The Loadstar) – Honolulu-based US domestic and transpacific premium carrier Matson has closed its seasonal China-California Express (CCX) loop ahead of the peak season, after spot rates on...

No need for US built ships to operate cross Pacific/Atlantic service under US flag, but Matson
do so anyway: 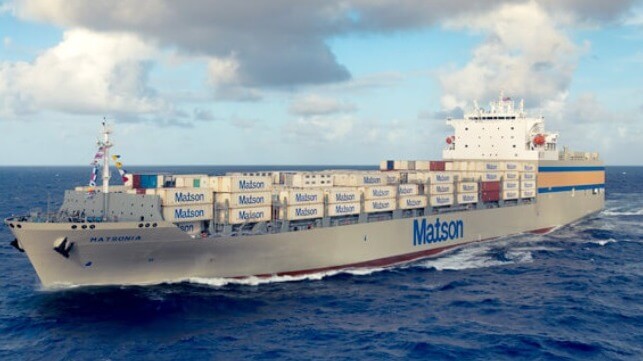 Hawaii-based carrier Matson posted exceptional earnings in the second quarter, driven in large part by the growing popularity of its transpacific serv...

Matson is the last operator using U.S.-built (not just U.S.-flagged) container ships in an overseas liner trade, and it has had considerable success. For more than 15 years, its Jones
Act vessels have been making voyages to China and back, providing a premium service for shippers who need fast transit times to Southern California. The higher freight rate comes with excellent performance for on-time arrival and cargo availability - both of which are hard to come by in the post-pandemic era.

But maybe this is all “Fake News” and anti-American rhetoric, put out by contrarian foreigners that know nothing about American shipping (??)

No need for US built ships to operate cross Pacific/Atlantic service under US flag,

Then immediately after that you link an article that explains exactly why and how Matson is able to operate their service.

It’s true that Matson’s expedited East bound service wouldn’t require US flag ships but that would mean the ships would travel westbound virtually empty. By being Jones Act compliant, they are able to leave the USWC fully loaded with cargo (for Hawaii) for that leg of the voyage.

As far as this:

Are we on the same planet

I don’t think that was meant for you. I’m pretty sure that was for the poster whose standard for what qualifies as an open border is… unique to say the least.

By being Jones Act compliant, they are able to leave the USWC fully loaded with cargo (for Hawaii) for that leg of the voyage.

Yes I know why Matson use JA compliant ships on their China - USWC service. (But I think Guam is more of a reason than Hawaii)
All other US-flag container vessels that trade internationally are in the MSC program and foreign built AFAIK. (??)

But I think Guam is more of a reason than Hawaii

The requirements for Guam are a little different than the rest of the US. The ships in that Trade (from the US) have to be US Flag but don’t have to be US built.

Is it possible to make it any more complicated?
PR, Hawaii and Alaska; JA with no exceptions.
Guam; exempt from US built, but not US-flagged rule.
U.S. Virgin Islands, American Samoa, and the Northern Mariana Islands; exempt from the Jones Act. 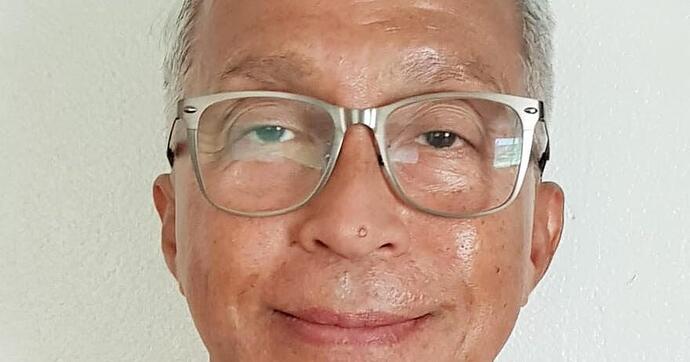 The Russian invasion of Ukraine is a new and painful challenge to navigate in our effort to move past the economic turmoil the pandemic has heaped on our island.

I don’t know where you have been hiding, but our borders are wide open!