Both claims are equally difficult to backpedal on. Dealers choice.

Are you saying the Russians have not committed war crimes by targeting civilians,

I haven’t made a claim about this one way or the other. If I’m wrong about that, show me where I made the claim.

By the way, you seem to be making an assertion that a woman, “kid”, or ex-prisoner cannot be a lawful combatant, as specified in the acknowledged laws of war, especially the Geneva Convention. As long as a woman, “kid” (we’ll talk about that in a moment) or ex-prisoner is wearing the uniform and devices of an army they are a combatant, and not a civilian. They are a legitimate target for opposing armies.

As long as a person is not wearing a uniform, and not carrying weapon, they are a civilian by the acknowledged laws of war. There is the question of guerillas and partisans but the laws of war are clear about the treatment of civilians.

Now, what is a “kid”? A 16-year old is a kid, but 16-year-olds have been in armies, even in the U.S. army in WW2, albeit by lying about their age. (The American hero Audie Murphy was 17-years 10-days sold when he enlisted.) If they wear a uniform and carry a gun they are a combatant. A legitimate target for opposing forces. But a 16-year old not in uniform studying in a high-school which is targeted by enemy artillery solely for reasons of terror (this is a hypothetical) is a victim of a war crime. As would be a 30-year-old handicapped man sitting at home doing nothing, dragged into the street and hung to terrorize a populace.

Do you see the difference?

Are you saying the Russians have not committed war crimes by targeting civilians,

I haven’t made a claim about this one way or the other. If I’m wrong about that, show me where I made the claim.

I think you’re an interesting dude and I’m happy to have legitimate discussions with you about issues we disagree on.

But you followed this post by making that exact claim. Claiming otherwise is just quibbling.

I’d be happy to talk about whether the West or Russia looting Ukraine is better but I’m not interested in quibbling.

Allow me to quibble…
Nowhere, to my knowledge, have I accused the Russians of committing war crimes. I have simply described what war crimes are, in respect to targeting civilians.

I have refrained from talking about Russian war crimes because the Ukrainians will likely commit their own crimes if they win this war. They will be forced into a moral calamity which history shows they likely will have neither the will or resources to restrain themselves from, namely, revenge on collaborators and suspected Russian sympathizers.

After WW2 ended another bloody battle ensued in France, when the Maquis (the Resistance) took revenge on German collaborators. It went on for years. Some was legitimate. If you were a French cop who shot Frenchman on behalf of the Gestapo during the Occupation you either fled France or were liquidated. But some was just bloody-minded tribalism. If you were a Frenchwoman who had a baby with a German soldier you were kicked out of town and shunned–or murdered.

If the Ukrainians manage to liberate their captured territory the same thing will occur. Anyone suspected of collaboration with the Russians will be shot or drove over the border, and innocents will be caught up in the carnage.

The fact that Modi and Xi met with him publicly at all and their continued business with Russia is a snub to the west. They said what they had to in front of the cameras while they inked fresh contracts with Rosenft in the side meetings. Inflation is 2% in China, ours is running at 10%…at least.

As for the war, it is still young and a stalemate has developed. The lines have moved little and outside of the gains around Kharkiv (which are now static) there has only been slow and grueling Russian progress.

By most estimates Russia is only using 200,000 of its million plus army in the Ukraine to fight an indigenous army of over 600,0000 (almost one million of you listen to zelensky) who are using the latest in western weapons. Yet they are still there. The Russians are still there. Will they be there 6 months from now? I believe they will and the new borders (when this is finally over) will resemble what the line of contact is now. What our economic picture looks like is the uncertainty. I can guarantee the juice will not be worth the squeeze.

If the Ukrainians manage to liberate their captured territory the same thing will occur. Anyone suspected of collaboration with the Russians will be shot or drove over the border, and innocents will be caught up in the carnage.

Then the Ukrainians are as morally reprehensible as the Russians. What they do to their own countrymen after they liberate territory has nothing to do with Putin.

Mass grave of over 400 mostly civilians found in Izium, an area liberated from the Russians, numbers of bodies bound with rope and evidence of torture a war crime.
UN has dispached investigators

Another Katyn Forest. There seems to be a Russian gene that surfaces each generation to create a nation of Barbarians.

It’s not a gene. It’s the way thoughts are formed in our individual & group minds with different languages. The people of Russia mostly think in Russian & share very similar electronic pathways in the brain while forming sentences, paragraphs & thoughts. One thing that makes human culture so different from one another is they way each thinks differently using their own sentence & thought structure.

You can have a little racism, as a treat. But only Russians.

Russia is only using 200,000 of its million plus army in the Ukraine to fight an indigenous army of over 600,0000 (almost one million of you listen to zelensky) who are using the latest in western weapons

That’s partly true. Yes, the Ukrainians always had an advantage in numbers. But the Russians began with an overwhelming superiority in tanks, APCs and artillery. Mechanized war depends on air superiority. The Ukrainians have been clear about this from the beginning: give them the arms and aircraft without which offense in mechanized warfare is impossible, and they will win.

Once NATO began supplying artillery, the Russians have fallen back. The mystery to me is why they are doing so poorly, even with air superiority. The Ukrainians are begging now for main battle tanks and APCs to keep the Russians running. Will they get them? 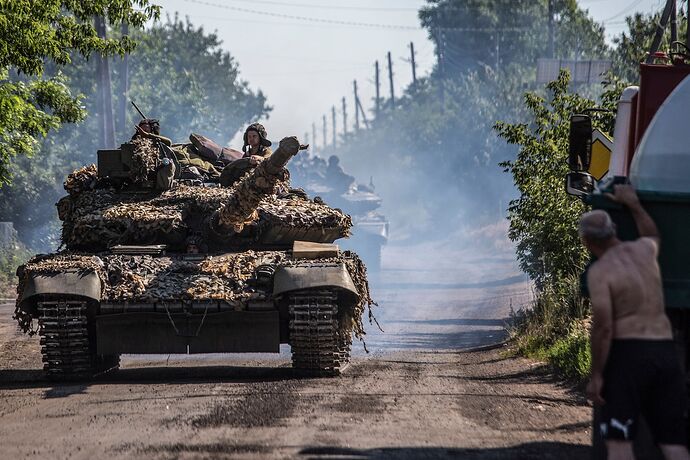 Ukraine is pressing its case with Western countries for battle tanks and other vehicles that could help in future operations against Russia.

I believe they will and the new borders (when this is finally over) will resemble what the line of contact is now.

Then the lines may become static. Crimea is a tough nut to break for the Ukrainians because the isthmus is so easy to defend.

Here’s another point of view.
Personally I think Putin bit off more than he could chew. He underestimated the Ukraine people. Yes, they know they have their oligarchs and corruption just as Russia has but they decided they prefer the devils they know. After all, they know where their devils live. 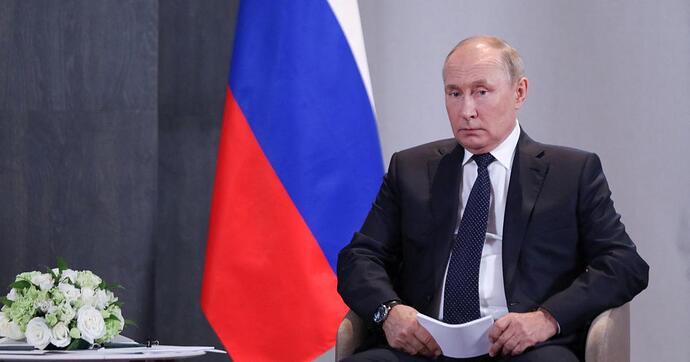 Putin’s Next Move in Ukraine

Mobilize, retreat, or something in-between?

Russia borders Ukraine so the supply lines are already short and for the Ukrainians to cut them they will have to retake territory by crossing rivers and establishing bridgeheads, something that that will be difficult now that the Russians have targeted the dams on certain rivers (Inguelt River for one), These natural barriers like the Oksol and Ingulet rivers are where the Russians fell back to and are easily defended as they still have air and artillery advantage. Russia is also stepping up attacks on power plants that supply the Ukrainian railroads with the electricity needed for regrouping.

The populace in occupied Ukraine are predominantly ethnic Russian so the problbailty of a revolt is unlikely, however saboteurs are regularly operating in these areas.

A dose of reality from the Germans:

US News is a recognized leader in college, grad school, hospital, mutual fund, and car rankings. Track elected officials, research health conditions, and find news you can use in politics, business, health, and education.

who's got the clocks and time part 1.mp3

who's got the clocks and time part 2.mp3

The rest is main sewage media like WAPO/NYT/BBC/Guardian/AP etc, etc wishful thinking . However thin they slice it is still boloney…

Sorry to bring You bad news

he under estimated crossing the red line where the rest of the world said enough is enough.

Other than the pariah states everyone knows the war is an illegal invasion and is helping Ukraine to defend itself.

It’s not a gene. It’s the way thoughts are formed

Can you spell metaphor?

You want us to open a drive file posted by a Putin supporter ?

Just look for the .exe file and double click. All will be explained