I can say that with more experience that anyone on this forum searching for Amelia Earhart, that this clown Gillespie at TIGHAR just cannot grasp that her plane is not at Nikumaroro Island! It is on the seafloor somewhere within 100 miles of Howland Island. This latest is only another attempt to keep his idiotic dream alive and to get more money! 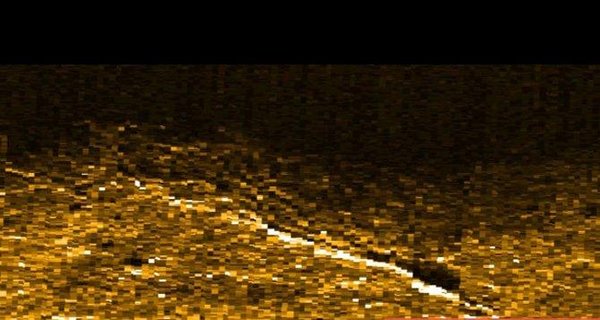 this ain’t a goddamned Lockheed Electra!

A grainy sonar image taken just offshore a remote south Pacific island could reveal the remains of Amelia Earhart’s plane, according to a group of experts with The International Group for Historic Aircraft Recovery (TIGHAR), which has long been searching for the answer to one of history’s great mysteries.

TIGHAR this week released details of a recent expedition to the island of Nikumaroro located in the southwestern Pacific nation of Kiribati, where Earhart’s plane is believed to have crashed in 1937.

According to TIGHAR, an anomaly seen in the grainy sonar image is the right size, the right shape, and is in the right place for it to be the Lockheed Electra aircraft.

“So far, the harder we’ve looked at this anomaly, the better it looks,” TIGHAR said in a statement.

The sonar image was acquired using an Autonomous Underwater Vehicle (AUV) equipped with side-scan sonar, which last summer surveyed roughly 1.3 nautical miles of shoreline off the west end of Nikumaroro. The anomaly in the grainy image is located on a reef slope just off the coast.

The image gives the impression of being an object that struck the slope at the base of a cliff at a depth of 613 feet, then skidded in a southerly direction for about 131 feet before coming to rest, according to TIGHAR. The object measures an estimated 32 feet long (the Electra fuselage was almost 39 feet long), but evidence points to a trailing debris field of fuselage wreckage which would most likely account for the difference.

Whatever the anomaly is, most agree that it is worth another look.

What do you think, is it her plane? The full report is worth a read over at the TIGHAR website.

There is no way in hell that the plane had enough fuel to make it the 400 miles to the island after Earhart spent a full hour and half searching for Howland. Members of the USCGC ITASCA listened to her radio transmissions during those 90minutes and heard her growing desperate and then declare to be out of fuel and ditching. How people can be so deluded to believe the physically impossible staggers my imagination! STOOPID, STOOPIDER, STOOPIDEST!

Oh, Come On, we all know that she is living on some Island with Elvis and Jim Morrison.

[QUOTE=Tugs;111134]Oh, Come On, we all know that she is living on some Island with Elvis and Jim Morrison.[/QUOTE]

No she isn’t, Tupac Shakur shot up that island 17 years ago.