From the Washington Post and makes for an interesting reading After 95 years, a Navy ship lost at sea with all hands is finally discovered

USS Conestoga, believed sunk near Hawaii, was 2,000 miles away, near San Francisco. The USS Conestoga left the Navy yard at Mare Island, Calif., on Good Friday, 1921, bound for Pearl Harbor, with a complement of 56 sailors.

It cleared the Golden Gate at 3:25 p.m. and steamed into the Gulf of the Farallones in heavy seas. Conestoga was a rugged oceangoing tug that had once hauled coal barges for a Pennsylvania railroad.

But 17 years after its launch in Baltimore, it had undergone hard use and had a reputation as a “wet boat,” one that shipped water easily.

At 4 p.m. that day, as the San Francisco light ship recorded big waves and gale-force winds, Conestoga passed Point Bonita and was not heard from again.

Wednesday, 95 years later, the National Oceanic and Atmospheric Administration and the Navy announced that the wreck has been found a few miles from Southeast Farallon Island, just off the California coast.

The announcement came at a morning ceremony at the U.S. Navy Memorial in Washington, attended by relatives of the lost sailors.

After exhaustive research, which was complicated by the Navy’s assessment that the ship had sunk 2,000 miles away, the wreck was confirmed in October as the Conestoga.

The disappearance was one of seafaring’s enduring and tragic mysteries, NOAA said. No trace of the crew was ever found.

No one recognized that the vessel was missing until more than a month had passed and it failed to show up at Pearl Harbor, according to a report on the discovery by Delgado and NOAA colleague Robert V. Schwemmer.

The Navy then launched an 11-day search with 60 ships and dozens of airplanes covering 300,000 square miles. But the search was centered around Hawaii, where the Conestoga was thought to have been sighted before it vanished.

The search was futile. The ship had gone down half an ocean away.

[/B]The mysterious shipwreck was first spotted during a general NOAA sonar survey of the marine sanctuary in 2009. But it wasn’t until a friend pointed it out in 2012 that Schwemmer learned about it.

Schwemmer is the regional coordinator of NOAA’s five West Coast marine sanctuaries and has a large shipwreck database.

The image showed a wreck, 170 feet long, resting in about 200 feet of water some 30 miles from San Francisco.

Schwemmer was intrigued. There was no record of such a ship going down in that area.

He put it on his list of sites to be examined.

In 2014, he got the chance, during a program to make an inventory of local shipwrecks using a research vessel and an underwater robot.

He and Delgado planned to check out several sites. They had no idea that this one might be Conestoga’s resting place.

Schwemmer had the ship’s sinking in his records, but “Conestoga in my database was Hawaii,” thousands of miles away, Schwemmer said in a telephone interview last week.

That September, they lowered an underwater robot equipped with cameras and watched from the research ship on the surface. As the robot descended and the ghostly outlines of the wreck emerged, Delgado said, “That’s a tugboat.”

He recognized the curve of the bow and saw where there had once been “rub rails,” wooden bands that protect a tug’s hull. “It jumped right out at me,” he said Monday.

It was an older boat, probably coal-fired, and large for a tug.

As the robot maneuvered, the men spotted a big steam engine, a towing winch, and a spare propeller that was stowed on deck.

The propeller suggested that the vessel had not been scuttled, Schwemmer said. The valuable spare would not have been left behind if the ship had been intentionally junked.

The tug had probably gone down in some mishap.

But what kind? And what ship was it?

When the expedition ended, the two men flew to Norfolk for a maritime heritage conference. But they were still focused on the anonymous tug.

He broadened his search, to include tugboats lost anywhere.

He stumbled upon a 1921 story in the San Diego Union about the missing Conestoga. The report said the ship had stopped at the Navy’s Mare Island before leaving for Pearl Harbor.

Schwemmer did not know much about Conestoga. Hadn’t it been lost near Hawaii? Curious, he did a Google search for Conestoga and looked up its length.

He contacted Delgado and said, “Come to my room.”

Lt. Ernest Larkin Jones had 55 men aboard as he prepared to leave Mare Island first for Pearl Harbor and then their new duty station in American Samoa.

It was a big crew for a tugboat. But Conestoga was a seagoing vessel needing round-the-clock watches. And it was carrying some Navy passengers.

Jones, 41, was the son of Kansas homesteaders, his granddaughter, Diane Gollnitz, 73, of Lutherville, Md., said last week. “He was born in a landlocked state and used to read books, I’m told, of the sea,” she said. “So he joined the Navy.”

He enlisted in 1902 and worked his way up to warrant officer, ensign and lieutenant, according to the Naval History and Heritage Command.

Jones had been married for seven years to the former Loretta Fogarty, of Newport, R.I. They had an infant daughter, Paula, who had just been christened.

Gollnitz has a photograph of a proud Jones smoking a cigar and holding his daughter in her christening dress. “It’s the only one I have of my mother with her father,” she said.

Conestoga’s crew came from across the country, according to biographies compiled by a NOAA genealogist.

They were sons of immigrants from Italy, Hungary, Norway and Denmark.

Water Tender James Flynn, 41, was born in Ireland, and his first language was Irish. He had come aboard Conestoga only 12 days earlier, replacing a sailor whose enlistment was probably expiring.

Fireman 1st Class William Walter Johnson, 29, from Boonville, Mo., had just come aboard March 25, as the tug got ready to sail.

Louis Anthony Marchione, 21, a fireman 3rd class, sent his pay home to help out his family in Brooklyn. His parents received his last letter three days after the ship sank.

Mess Attendant 1st Class Edward Wilson, of Pensacola, Fla., was one of 16 children. He was about 17 when he enlisted in 1919, and he posed for a photograph shortly thereafter.

As Jones sailed Conestoga from Norfolk, through the Panama Canal to San Diego, his wife and daughter traveled across the country to say goodbye, Gollnitz said in an interview.

“They weren’t going to see him for years,” she said. “He was going to be stationed in American Samoa. . . . And my grandmother and mother saw him off.”

A photographer took a series of striking pictures of Jones and his crew during the stop in San Diego.

But Gollnitz said her mother retained no memory of him.

“She . . . tried her best to remember,” she said. “She was shown pictures, of course, and was told about him, but couldn’t remember.”

Conestoga, with its 1,000-horsepower engine, steamed into the Pacific under clear skies that Friday, but against rising winds and seas.

Indications on the wreck suggest it may have been towing a barge, which would have complicated its situation. But NOAA did not find a barge of that vintage nearby.

The wind was blowing 40 to 48 mph and the waves were high. The NOAA report says the rough seas likely washed over the ship, perhaps smashing its wheelhouse windows.

The crew could not pump the water out fast enough, and Jones was probably making for the shelter of Southeast Farallon Island, which had a lighthouse.

Later, an empty lifeboat bearing the letter “C” was found off the Mexican coast. A USS Conestoga life preserver and kegs of provisions that may have come from the ship washed ashore near Monterey.

But the evidence was inconclusive, Schwemmer said, and the search for survivors was conducted far away.

In 1958, Gollnitz and her mother sailed from San Francisco via Pearl Harbor for Thailand to join her father, who was stationed there in the Army.

Around Pearl Harbor, where Conestoga was thought to have been lost, “my mother was very emotional,” Gollnitz recalled. “You’re looking out at the sea and wondering, ‘Is he here?’ She felt she was the closest to him then.”

They never realized, she said, that when they steamed out of San Francisco, “that’s when we were the closest.” 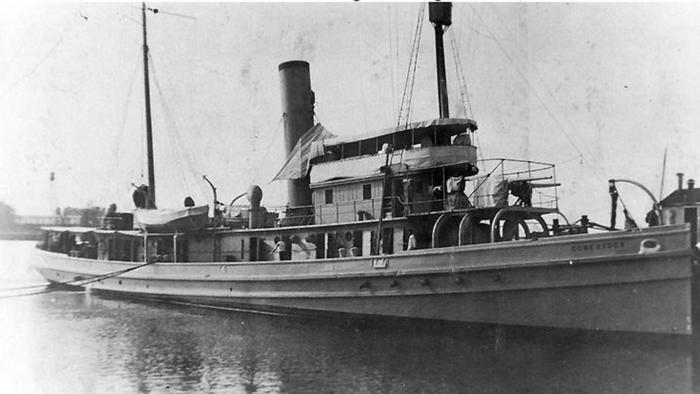 Just noticed this on gCaptain’s home page. Sorry for the double post.